The tennis match – Chapter 7: The tie-break

This is the seventh chapter of the series “The tennis match”. You can read the previous chapters by clicking on the below links:
– Chapter 1: An appointment is made
– Chapter 2: On our way
– Chapter 3: Setting the rules
– Chapter 4: Time!
– Chapter 5: Tough game
– Chapter 6: Ambre strikes back

We returned to our previous court side. It was Ambre’s turn to serve to start the tie-break as I was the last one to serve a game in the present set. She looked absolutely amazing in her Eve outfit, bouncing the ball behind her baseline, a proud and combative stare set on me. It was kind of intimidating to watch that sweaty and fierce fighter projecting all her will into the points to come. I did not let her intimidate me, taking an academic receiving position, my racket head high, my two feet well apart, my torso bent over and my eyes on the target, that little yellow ball on the other side. I was probably quite a show from behind I thought, but who cares, we were alone, at least I hoped so.

Finally, she tossed the ball which flew high, I do not why but I remember this moment very well. To me it was as intense as if I was playing the finale of a grand slam such as Wimbledon … and the ball got hit by her racket and progressed fast towards me. From what I could analyse, she did not imprint any spin, the ball was fast, very fast. I read the trajectory and ran to the right side of the court where I had just the time to put my racket on the ball path. I touched it, the ball was on its way back to Ambre’s side in a high and curved trajectory. It hit the court in its middle and Ambre was easily on it, she delivered a killer forehand targeted on the left side of the court. I anticipated that and was already running towards the other side of the court where I touched the ball imprinting another lob trajectory to it. The feeling was extraordinary, it was as if I was fighting for my life and Ambre for hers, I could see that in her stare when she triggered a powerful smash which wrong-footed me … I stared at the ball passing me, continuing its path and hitting the court behind the baseline.
-“Out!” I yelled my wrist in the air in relief.

Ambre briefly looked at the impact mark and moved back to her side of the court, she lost the point. My defense saved me this time and I had now a mini-break.
-“1-0” I said joyfully to my naked opponent. She nodded in response taking the receiving position without any word. She was probably trying to gather her concentration and courage. Nothing was won or lost yet, but I had an advantage now.

My turn to serve. I took my time, there was no room for any mistake. I indeed served very well and followed to the net. An easy volley later and I was leading “2-0”. On my second serve, Ambre risked her all, delivering an amazing backhand. This time again I was charging to the net and I had absolutely no way to touch the ball.
-“1-2” said Ambre looking at me with intensity. She was such a beauty when committed like this … well her nakedness had maybe something to do with it as well. 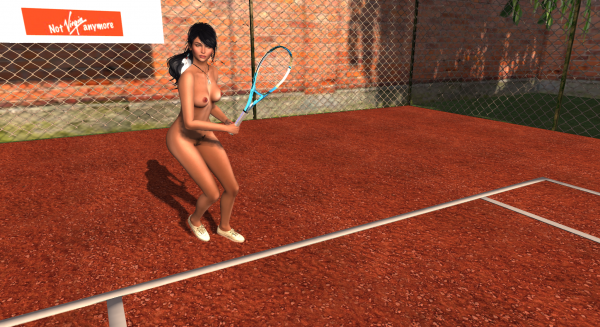 She grabbed some balls and prepared to serve. Her combativeness was impressive and it was to me an extra motivation to beat her. Unfortunately for me, her A-serve came back at the best moment for her and there was nothing I could do.
-“3-2” said Ambre who was now leading the tie-break. It was however now my time to serve and I had all intention to even the score. 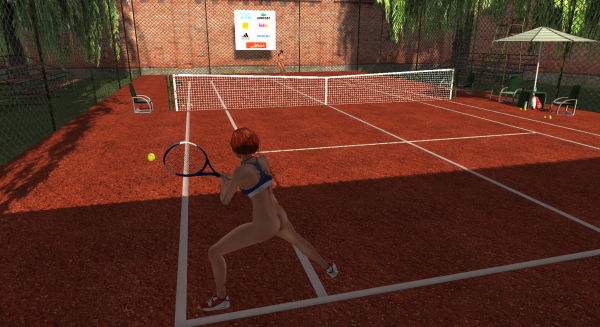 Once again I served very well but she got me as I was rushing to the net. She was playing very well making me doubt about my ability to score points when playing the net. She had that half and proud smile when the ball passed me and landed on the court.
-“2-4” said a proud Ambre walking back to her chair.

I imitated her but I was walking slowly … it was her turn to own a mini-break. This time though we were nearer from the end of the tie-break so it was more dangerous for me. I did not let her time to snatch her little victory, I unhooked my bra and sat as if nothing happened. 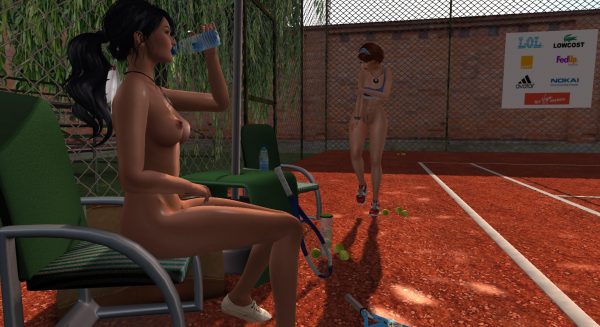 -“We are even now!” said an all-smiling Ambre more relaxed now that she was leading.
-“Not yet … I still have to make you to remove those socks … and make your sensitive feet to suffer finally!”

She stared at me a bit surprised and I kept a very serious face for a few seconds before roaring with laughter. She laughed with me. I drank water, trying to regain composure and confidence. I knew I could defeat her, all I needed was to believe I could actually do it. I was now fully naked apart from my shoes, it was definitely a very strange feeling and I confess it, I felt aroused.
-“Good luck Ambre!” I said standing.
-“Good luck Cath!” she said grabbing her racket and standing as I was already moving to my side of the court.

What I was fearing was definitely true: my breasts were swaying left and right and I was just walking … I could only imagine how it would be when I would run and hit the ball with my racket. I tried to calm down fighting the warmness building between my thighs. My nipples were fully erected, responding to the soft caress of the air… playing naked had been a fantasy for some time, I was amazed that I was actually living it with a … colleague. That was nuts!

I still had one serve but on the other side this time. I bounced the ball nervously, feeling my free boobies swinging between my arms. It was definitely exciting but I knew I would have to ignore that feeling and keep playing as if I wore a bra. I tossed the ball and stroke it hard with a side spin. Ambre got surprised by the trajectory but managed to return it nevertheless, her high ball hit the middle of the court. I rushed there, ignoring my free breasts moves and stroke a killer forehand that passed her easily. Playing naked was doable after all I thought, even very enjoyable as I felt my tummy tickles growing. I could only hope my arousal would not become noticeable. I closed my eyes and breathed deeply announcing “4-3” as I returned behind my baseline to receive Ambre’s serve.

Ambre did a fault on her first serve, it was my chance to come back. Her second serve was not powerful and I seized the opportunity, I attacked her on her backhand and rushed to the net. I did not had to volley as her ball fell in the net before I had a chance to.
-“4-4” I said with a bright smile.

Ambre served again but this time her powerful service passed and I struggled to return it and she easily won the point.
-“5-4” she said with a wink. The tie-break score was tight and the intensity of the match helped me to calm my body, my focus being more on the match than my nakedness now. 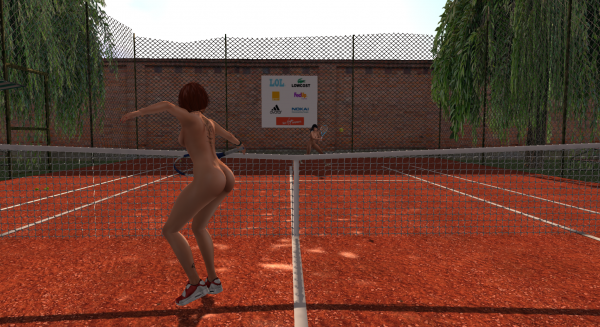 I won my next serve with an ace, it was unexpected but Ambre slid on the court and did not manage to touch the ball. At this moment of the match, it was definitely good to take an easy point. We were at 5-5 and it was my turn to serve again. I imprinted a side spin on the ball and targeted the corner, it forced her to run to the extreme side of the court, opening the rest of it. I took a risk by stroking the ball with all my strength targetting the opposite side on her backhand. My ball flew long, I started to fear too long, but it actually hit the court on the line… she looked it pass unable to touch it.
-“6-5… match point!” I said with a hint of victory in my voice.
-“Well played Cath!” she admitted. 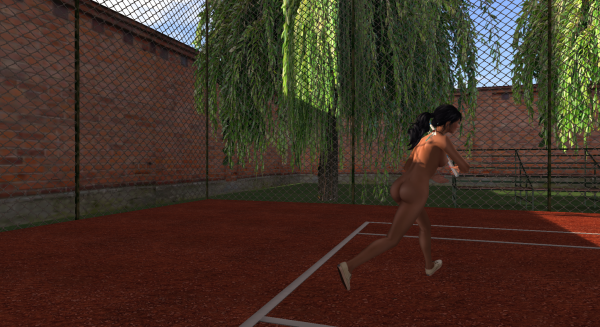 She grabbed one ball and prepared to serve. I was nervous, very nervous and I started to feel my arousal gaining on me… it was expected actually I was living a fantasy after all. She suddenly broke her position in a crouch, she was looking nervously all around her and I understood she heard or saw something. 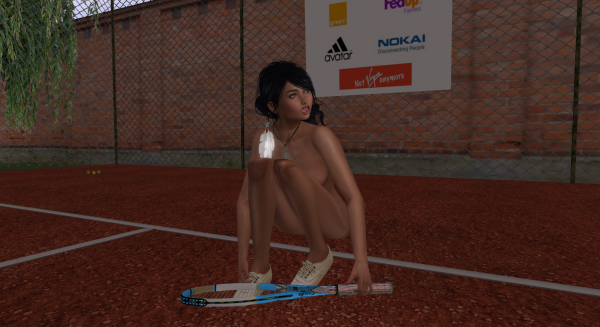 She gestured me to crouch as well which I did even before she asked. All my senses were suddenly heightened by the adrenaline. We were both exposed and vulnerable and I even did not think of an excuse, should someone surprised us. I paid attention to every noise but after one minute I was not able to detect anything strange. I raised and joined Ambre on her side of the court. She raised as well as I arrived next to her.
-“Did… did you see something?” I asked a bit worried.
-“I… I don’t know… I actually heard something… footsteps … but maybe it’s only my imagination.”
-“Hm… maybe we should stop here…” I said.
-“Are you kidding? No way… we will finish that match! Return to your side!” she said with a smile. “I probably just imagined it.”
-“Ok… let’s just be careful… if we hear something odd again we stop ok?”
-“Ok deal… now return there…you did not defeat me yet.”

I walked back to my side, feeling a lot more nervous as the event reminded me of the risk we were taking. It was a public place after all and we were not supposed to be naked here. As fear grew, my arousal did too and I had hard time concentrating. Happily for me Ambre seemed distracted as well and made a fault on her first serve again. Her second one was absolutely fantastic though, she took a big risk not to let me take the advantage in the point. I attacked her backhand but she responded well. I suddenly attacked on her forehand and rushed to the net, she ran and got the ball, returning a challenging ball … I volleyed a drop shot. She was too far and despite she tried to rush onto it, she could not get it. I just realized I won and yelled in ecstasy, I just won. 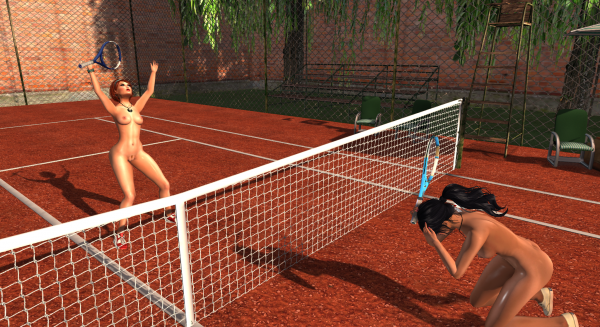 Ambre walked towards me with a smile despite of her defeat. We hugged with the net between us as we have always done so far, but the feeling was definitely very different. The feeling of her naked skin against mine, her soft breast pressing against me and I started to feel something unexpected… attraction.
-“Very well played Cath!” she said still holding me in her arms.
-“Thanks! You played really well too but I am happily I finally won your socks!”

She laughed, releasing our embrace and finally stared at me. She was so beautiful, her perfect skin tone was shining in perspiration, her tender lips displaying a warm smile seemed so inviting… but more importantly her intense stare was plunged in my eyes and I knew she was reading me, she knew what I felt as surely as I knew her feelings. It was awkward, there was that deep silence that lasted an eternity and finally her face approached mine… I could feel her breath, she froze waiting for an answer of me. I slowly opened my lips and finally her lips touched mine and we kissed … we kissed like lovers, it was so intense… my heart was beating so fast.

One response to “The tennis match – Chapter 7: The tie-break”