This is the fifth chapter of the series “The tennis match”. You can read the previous chapters by clicking on the below links:
– Chapter 1: An appointment is made
– Chapter 2: On our way
– Chapter 3: Setting the rules
– Chapter 4: Time!

Ambre started the match very well, she seemed very focused and did not make many mistakes. Not one time during this first game did she made a fault on her first serve. As I anticipated, the dry clay was an advantage to the server: the ball was arriving very quickly on me and I had to anticipate my moves if I wanted to return the ball. I took two times the wrong decision giving her two easy points.

When she tossed the ball at 40-15, I started to realize more vividly that I would probably end this game loosing one item of clothing. I clenched my teeth and tried to read her serve and this time I anticipated well and was on time on the ball to return an honorable long forehand which gave me time to reposition myself .. she sent a powerful forehand in return but her ball hit the net and the ball went high, giving me a good opportunity to end up the point, which I did with a brilliant backhand … she never touched that ball.
-“Lucky you!” she said with a smile.
-“That’s not luck … that’s talent!” I replied
-“40-30” she said re-positioning herself to serve.

I focused on her moves but I read it wrong this time and arrived very late on the ball … I returned a poor ball and she easily concluded the game.
-“Game! 1-0!” she said triumphantly.

I walked towards my chair, Ambre arriving at hers before me.
-“That set is starting very well” she said amused to play with my nerves.
-“Yes … yes … it’s my time to serve, don’t be too confident!” I said to defend myself.
-“So? 1-0 … I won this change of side didn’t I?”
-“Yes … yes you did” I admitted.
-“So? Which item of clothing do you choose?” she asked now standing next to me. 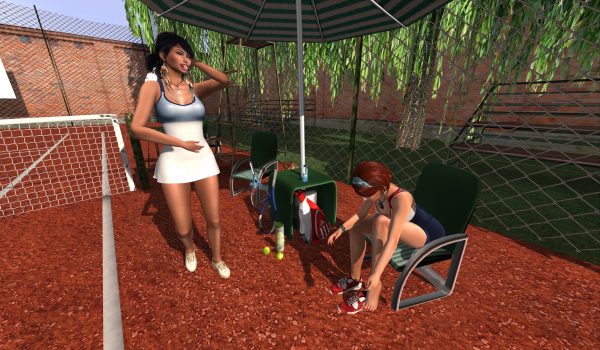 I untied my shoes and removed my sockets which I put in my bag.
-“There! Satisfied?” I asked her.
-“Hm … yeah … well I was expecting you to be more daring!”

We both laughed. I took a few balls in the basket and moved to the back of the court to serve. Ambre was getting ready and well … I was feeling nervous, really nervous! She would keep me under pressure the whole game, I was sure of this. I definitely had to serve well if I wanted to survive this match. I however felt some sweet tickling down there, oh God, it was so exciting. I focused back on my game, trying to remember my lessons. I tossed the ball and hit it hard and to my surprise, I scored an ace. 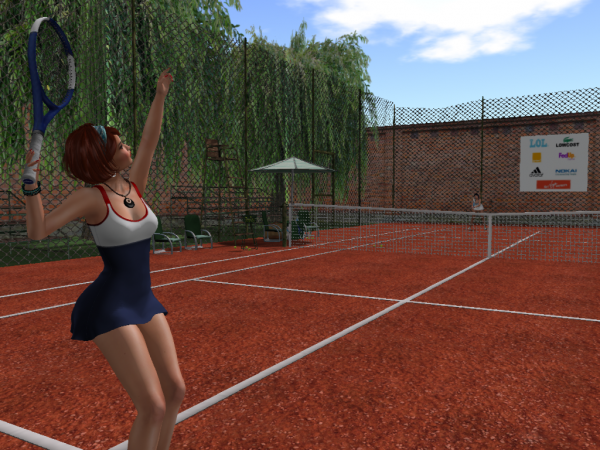 -“Well well well!” she said in her amused tone. “It seemed you learnt one or two things during the summer! I will be more careful, don’t expect to score the next point so easily.” 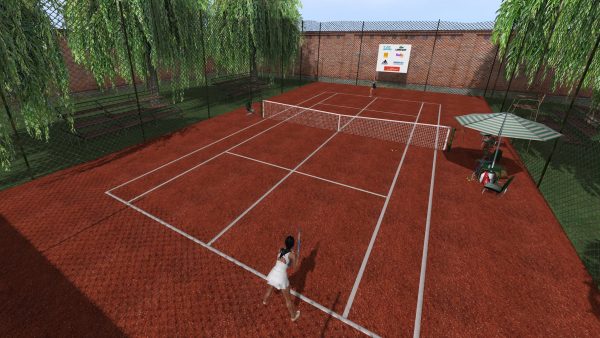 I kept serving well and won my game quite easily actually, I was definitely relieved.
-“1 all” I said. Ambre nodded and it was now her turn to serve.

I realised now that my situation was more comfortable than hers. If I managed to win my serve each time, I would put her under pressure, because she knew loosing her game would mean for her to strip. I smiled and fought hard trying to use this to my advantage. I felt she was indeed a bit more nervous and she made more errors. I was however not able to break her serve. We returned to our chairs, Ambre leading 2-1. 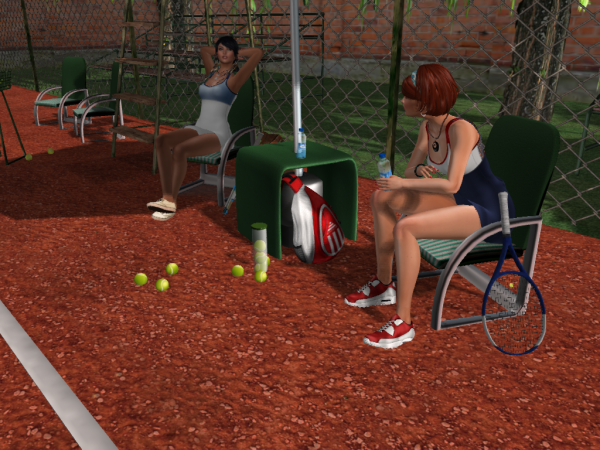 -“Your game has improved a lot Cath!” she complimented me.
-“Aww thanks!”
-“No seriously, your serve in particular! Not that I will loose of course!” She finally added.

I laughed and stood, walking slowly towards the back of the court. I definitely had to keep her under pressure with my serve. The sun was still shining and the temperature was warm … if the match lasted long, I would suffer from these temperatures … drink, I had to remember to drink regularly I told myself.

The beginning of my next game did not go as good as I would have expected. She read me well and led me 0-30 … I was in a big trouble, I knew my next item of clothing to go would not be as easy as my socks. I finally served a bit better but she managed to put me in difficulty and got her first break points at 15-40. I had no choice and decided to take a risk: I went to the net two times which took her by surprise and I could even the score and finally I won, to my surprise, my serve game.
-“2-2!” I said with a satisfied and surprise face
-“Well done!” she answered. She was now the one under pressure: she definitely did not expect me to come back in my game, that was a psychological advantage I had to use. 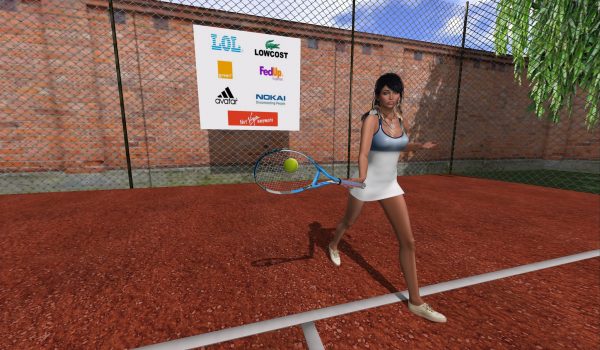 It was her time to serve but she played more safely, trying to let me do the errors. I then played a more aggressive game… and it worked! I could not believe it then, but I got my first two break points on her serve, and I won the second one.
-“3-2!” I said displaying a wide smile.

We moved back to our chairs. I welcome the shadow of the sun-umbrella and my frozen bottle of water. Ambre was a bit more silent and less playful than when we started, was she getting worried? The loss of these two games hit on her and I started to think I might actually win.
-“Ready to return on court?” I finally asked.
-“Hmm, hmm” answered a thoughtful Ambre.
-“Well, you have to let your socks here!” I said a bit mockingly. 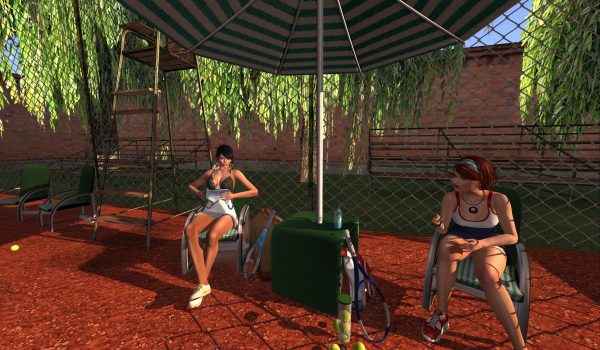 -“Actually … I have got a blister on my left foot, so… I will choose a different path than yours.” She smirked, looked at me and to my surprise, she slides the straps of her dress over her shoulders. One minute later she was folding her dress, putting it in her bag … she was standing in her lingerie and she did not opt for a modest set.
-“Oh my god!” I said clasping in my hands. “So bad we do not have an audience!” 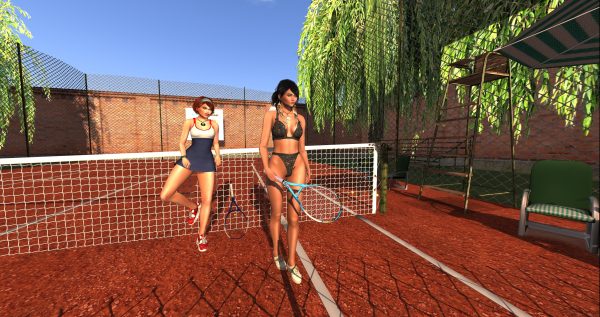 She stuck her tongue at me and walked to her side of the court.
-“I’ll make sure you lose a few games very soon Cathy!” she said semi-amused and semi-annoyed.
-“You’d better!” I said from behind the back line, ready to serve.

I easily won my next serve game. Ambre was having difficulties to focus on her game and made a lot of unforced errors … I would probably feel the same if I were to play in some sexy undies. I was now leading 4-2 and it was for her to serve. 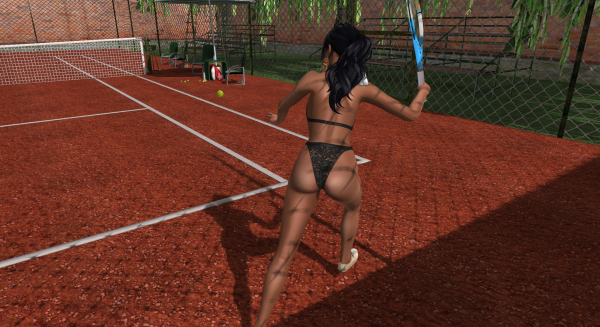 She took her time and tried to recompose herself, to find back her concentration. Unfortunately for her, her first serves did not pass during the game and I took advantage of it, taking the net to increase the pressure. Again it worked even better than what I would have expected.
-“5-2” I said with a victorious tone. 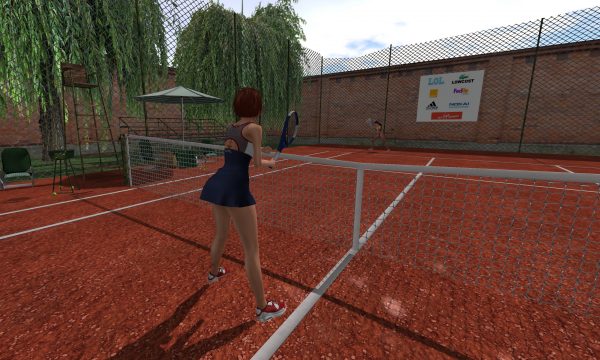 I was walking back to the chair, Ambre who had tried to take the net on her last point was staring at me with a wry smile. She walked past the net and still looking at me she unclasped her bra and let it fall on the clay in a theatrical move. She looked absolutely amazing, topless on the court, her daring panties were the only thing to cover her sexy body. She finally laughed and I was reassured that she was not mad at me but was seeing it as a game … just the way I always imagined it. 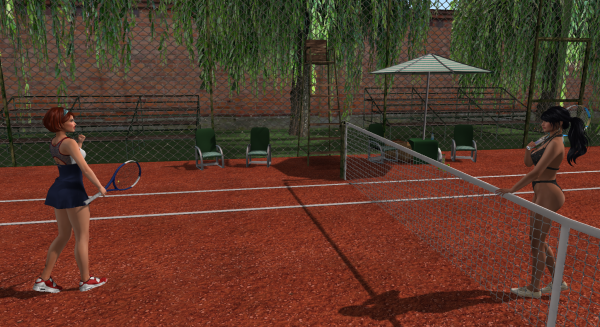 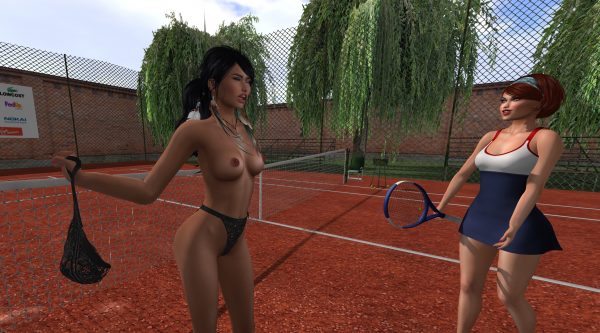 I grabbed her bra and handed it back to her and we moved to our chair. I was about to defeat her and she knew it would be hard for her. She did not break my serve so far and I did not intend to let her, the match was nearly won.
-“Good game so far, Cath!”
-“Thanks!” I laughed. “I cannot believe you’re topless!” I giggled. “I think there are a lot of people at work who would love to see that!”
-“Ah ah … no way! It’s just for you!” said Ambre. “But you have not won yet, I can still win … well even if it is a bit less likely now!”
-“Then … good luck!” I said standing to go to my side to serve and hopefully win the match, I just had to win one single game!!