This is the sixth chapter of the series “The tennis match”. You can read the previous chapters by clicking on the below links:
– Chapter 1: An appointment is made
– Chapter 2: On our way
– Chapter 3: Setting the rules
– Chapter 4: Time!
– Chapter 5: Tough game

I set my left foot right behind the back line and tried to focus on the game to come. Hopefully it would be the last one of the match and I would defeat Ambre. On the other side, Ambre was in a receiving position, her stare on me. She was just wearing her panties, socks and shoes, her boobies hanging free, she was incredibly sexy. I actually started to feel a bit nervous for her: this was no longer a standard tennis match, she was nearly naked and if someone would come, we could be in deep trouble. It was though very unlikely, the club seemed already empty when we arrived earlier, the chance for someone to check on the most remote court were thin … still the risk was there, and this was what made this match so special, so tensed … I loved every minutes of it. I calmly bounced the ball, focusing my attention on it and finally, I tossed it high in the air. I hit it hard, the game was on!

Ambre read the trajectory very well and was early on it despite my very good serve. The ball came back my way way faster than I anticipated and I barely managed to touch it, it went high and unfortunately it landed out.

-“Love-15” said Ambre with a smile while taking her receiving position again.

She was focused on her game definitely, she would not let me win that easily so I had to tighten my game. I served well actually, but she returned even better, she forced me to take risks and I inevitably made more errors. She was everywhere on the court, she ran on all balls, apparently not bothering about her boobs bouncing around as she caught with the ball. 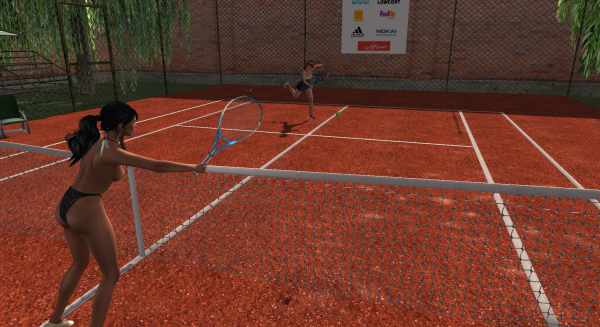 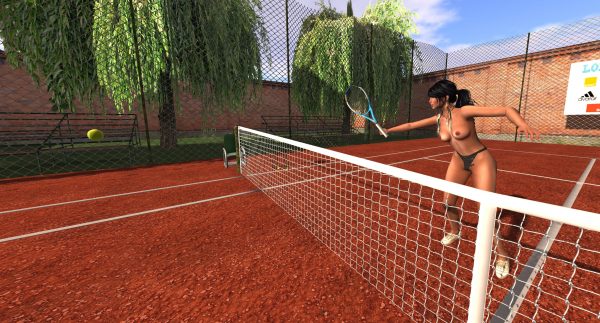 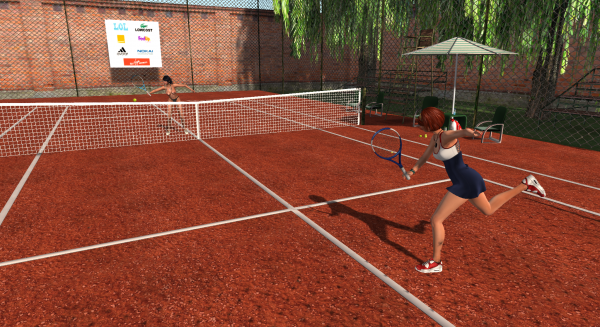 Ok, she now had a game point and an opportunity to come back in the set at 5-3. She took a very aggressive receiving position, very inside the court, that was a provocation … and happened what she expected, I made a fault on my first serve trying to force on it a bit too much. Second serve, I had to make it slower but not too much, she took the ball very early, hit hard, and won the game brilliantly.

I was a bit frustrated when I prepared myself to return… I had just been beaten by a topless player. I guessed I would not be comfortable at all playing like this, feeling my boobies freely moving upside down, but Ambre did not seem to bother at all. On the contrary, she played really well, her best return game since the beginning of the set definitely. Well, that was it and I had to deal with the situation … maybe I could take advantage on her serve: hitting the ball bare-chested would probably be a handicap, it would be for me at least. But Ambre was definitely of a different feather. She put a lot of spin in her serves and took the net systematically, it put me under a lot of pressure. That half naked lioness was merciless and despite I successfully passed her two times, she easily won her serve game. She raised her fist in a victory gesture and looked at me defiantly as we came back to the chairs.

-“4-5 Cath … I am coming back!” she said in a confident tone.
-“Yep, apparently you are!” I said a bit annoyed to have lost those two games. She chuckled, quite satisfied of her performance actually.
-“So? What do you remove?” she asked displaying an half-smile. I shrugged and smiled back.
-“Dress!!”
-“Geeee! That’s my Cathy!” 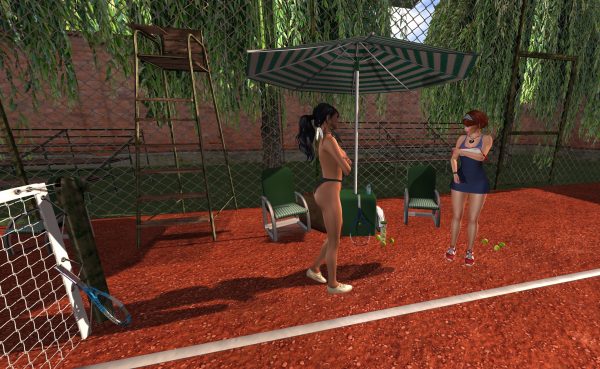 I giggled and cautiously peeled from my dress that I folded and put on the back of my chair.

-“Tada!” I said facing her with an amused smile, my frustration put over by Ambre’s joy of life. She clasped in her hands appreciatively. “Thanks! thanks!” I said bowing as if I were an artist at the end of a good performance.
-“Let’s see if you can still play in your undies!” she joked.

I grabbed my racket and walked towards my side of the court. It felt a bit strange at first but I realised it was not showing more than my bikini would and actually with the temperature we were enduring since the beginning of the match, it was also a relief to wear less. Maybe that was the reason why Ambre played her A-game wearing her panties only. I could not prevent myself to look briefly around to ensure we were indeed by ourselves… no souls at sight. I bounced the ball, concentrating all my mind on it. The half naked Ambre, on the other side was waiting for me to serve. I could see in her attitude that she was about to deliver a big fight. I took a deep breath, tossed the ball and gave it as much power and spin that I could manage. Ambre got a bit surprised but managed to return a neutral ball that was not easy to work on. I did not want to take a risk and simply placed the ball to make her cross the court. Being topless she surely would be slightly slower due to the lack of « support ». She perfectly managed to return a long ball on my backhand and she took the net. I saw her coming and shot a successful lob.

It was actually easy to forget the way I was dressed or undressed when I focused on the game. It was probably how Ambre managed to resist and play so well despite her state of undress. 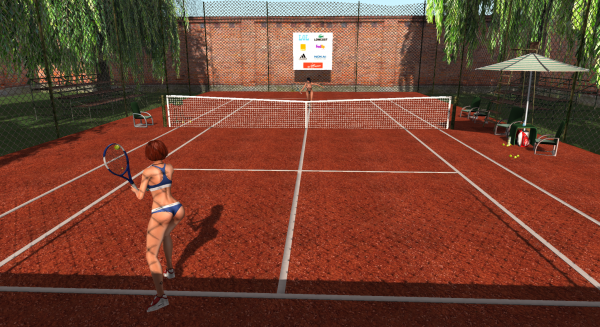 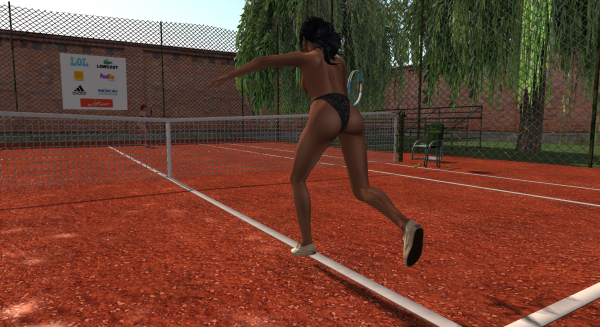 The next point was easier as I shot an ace. I continued to concentrate and serve well trying to manage my advantage and finally I managed to offer myself with two match points.

Ambre slowly walked to her receiving position. I could feel her strong focus, I definitely had to serve well. But I did not. I hit the top band of the net and made a fault. My second serve was a bit too short, she returned a powerful shot on my backhand that I was not able to return.

I took my time to serve my second match point and it paid. Ambre was in difficulty and returned a ball that bounced high, an easy shot for me. I smashed a powerful shot and was sure this one would be the final point. Ambre anticipated the trajectory and to my surprise she managed to touch it with a last second backspin forehand. The ball flew rather slowly and hit the band of the net… it stumbled an instant and fell … on my side of the court, the point was for her.

-“Deuce!” she said with a large smile.
-“Awwww, lucky you!” I said unable to hide my frustration.

Then it became for me very difficult, I did a double fault and she won easily the next point. My concentration was completely over.

-“5-all” said an all smile Ambre ready to serve again.

I did a lot of unforced errors and she easily took her serve game, managing to take the lead again in the set at 6-5. I was aghast, she managed to come back and I just lost another item of clothing. It was as if she became un-beatable since she uncovered her tits.

I sat on my chair, my stare lost. Ambre was on the contrary jubilating.

-“How do you manage to play that well wearing so few? … and be so lucky!” I said finally overwhelming my frustration.
-“You will soon figure out yourself … as it seems you’re gonna strip a little more” she said with a friendly smile.

I laughed finally. I did not why, maybe out of tension but I was unable to stop and Ambre started to laugh as well.

-“Seriously Ambre… how can you play without your bra like this? I could not keep playing my A-game without mine.”
-“Well … I actually rarely wear one when I am not at work… so I guess I have a certain habit.” she said displaying a frank smile
-“Really?”
-“Yes really… it feels so comfortable, you never tried?”
-“Well … It happened to me a few times but I don’t like the feeling of my boobies swaying all the day long… and it does not look good. I have not an amazing body like yours” I said.

She chuckled.
-“You do not look that bad Cath. So? Am I going to see those boobs of yours bouncing all around?”

I started to unhook my bra but I had second thought. I hooked it back, stood and in a quick gesture I slid down my panties down my thighs and legs and finally stepped out of them. I was bottomless on a tennis court and… I really liked the feeling… even more the puzzled face of Ambre. 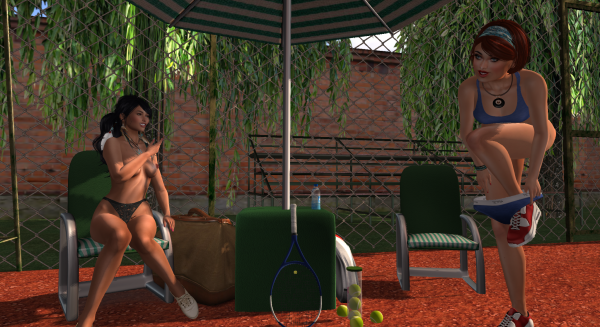 -“I stand no chance without a bra …. so, here I am, ready to resume that match!”

-“OMG Cath, it’s crazy! I never had that fun and intensity in a match before” she said with a large smile.
-“Yes … I have a lot of fun too!” I admitted. Then standing I said « let’s see if I can win my way to the tie break » I said.

Ambre stood and walked to her side of the court. I did the same but feeling strange sensations as I could feel the warm air caressing my most intimate bits. It was wonderful and lust started soon to fill my mind. I wondered if it was a good idea after all … my bra would have distracted me less I supposed. It was done now. I nervously looked back, I was now seriously exposed. Bouncing the ball once again I tried to recompose my concentration and actually I managed pretty well. 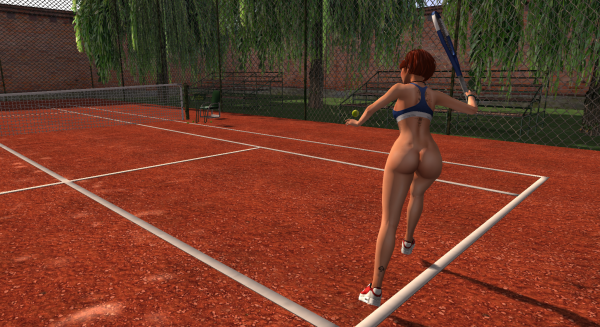 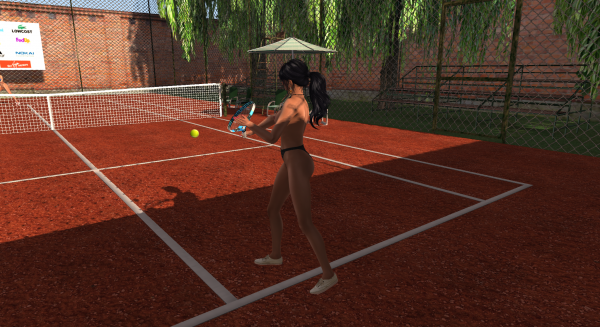 I won my serve game with ease, Ambre seemed more distracted …. maybe my little exhibition hit on her. Anyway I was really happy to even the score at 6-6.

-“I guess I lost that one even if it was only one game?” she asked putting her racket against her chair.
-“Indeed!” I said with a large smile. 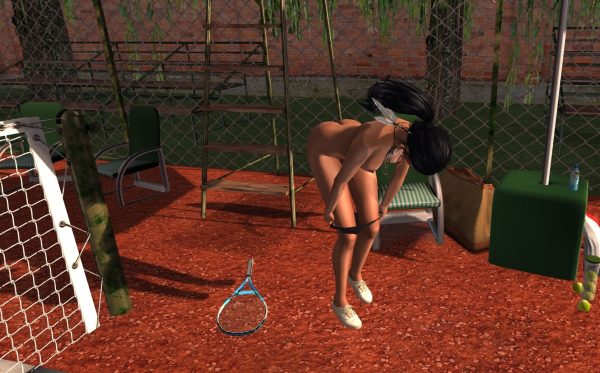 She did not let herself time to think twice. She slid her panties down, grabbed them and stuffed them in her bag.

-“Wow … that will give some interesting …. sensations” she said giggling.
-“You’ll soon figure out” I said repeating her own words.

Ambre laughed staring at me.

-“We are crazy Cath!! But it’s good to feel alive and … to share that with a free soul!”

I smiled, touched by her soft words.

-“To be honest I would never have thought we would strip that much” I admitted.
-“Me neither! But I feel I won’t be able to play dressed tennis anymore!” She laughed and I imitated her, feeling well and free, feeling alive as she said.
-“Time for an incredible tie break?” she asked a hand on her hip and a friendly smile on her face. 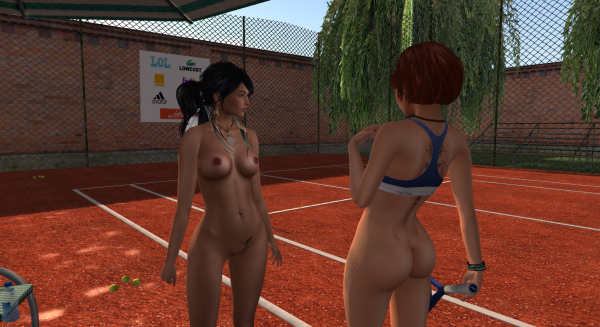 One response to “The tennis match – Chapter 6: Ambre strikes back”