This is the third chapter of the series “The tennis match”. You can read the previous chapters by clicking on the below links:
– Chapter 1: An appointment is made
– Chapter 2: On our way

We finally parked the car and made our way to the changing room giggling like schoolgirls about to do silly things, which we were actually about to do. I was still unable to believe I had been bold enough to propose Ambre such a crazy thing, was I that stupid? She was after all my colleague before being a friend .. maybe not after all. Only a friend would accept to play those games.

As I hoped it would be, the changing room was empty. Our booking slot was actually the last one and at this period in August most of the club members were probably still enjoying their holidays somewhere else in the world. We were alone … I was still worrying as we started to change that I could end up naked on the court that day.
-“Are you sure you want to do this?” I finally asked.

She froze an instant and stared at me with a devilish smile.
-“Are you chickening out Cathy?” she finally said. “Afraid that I could make you play in the nude outside?” she whispered.
-“Nope, not at all … I was saying that for you” I bluffed.

She laughed, I did not know if she was able to tell I was really worried or if I succeeded to conceal the truth.
-“Ok sit” she said taping on the bench. How do we play strip tennis? What are the rules?” 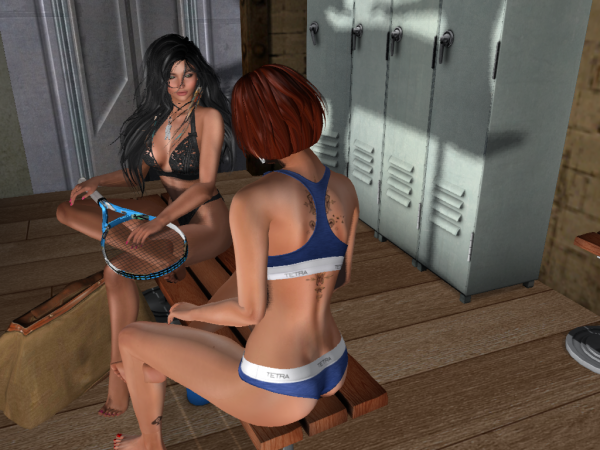 I sat next to her, trying to imagine rules that would not be too hard …
-“I … I really don’t know, I never dared to play it before!” I said. She laughed and stared at me waiting for me to give her the rules of my silly game. “All right … well … what I would propose is that we count the number of games won between 2 changes of side. If we are even, nothing happens, but if one of us wins more than the others then the looser has to strip one item of clothing. How is that?”
-“I see … so if we both serve well, nothing will happen then.”
-“Yes exactly, the service will be key to keep us clothed.” I replied happy to have found this rule that could actually allow us to remain dressed, still keeping the threat of having to loose an item of clothing.
-“Exciting!” she said. “And what about the first game? We change sides after only one game normally.”
-“Hmmm yes … true. Then for this one, whoever loses the game, loses one item of clothing.”

She laughed.
-“All right that will be a bold opening” she said clasping in her hands.
-“Oh God … what did I just do?” I said taking a faked worried face 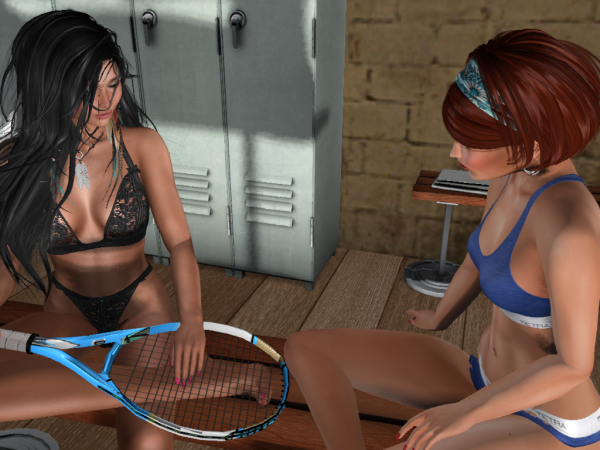 She laughed even more.
-“That will be the funniest game in my life Cathy! Deal!” she said extending her hand. I took hers and we shook hands to seal our agreement. “Let me take a quick shower and then I will be ready to strip you on court” she finally said raising.

She quickly stripped and went under the shower. She did not even bother to close the curtain, I moved to the nearby sink to let her some privacy as we continued to discuss the rules. 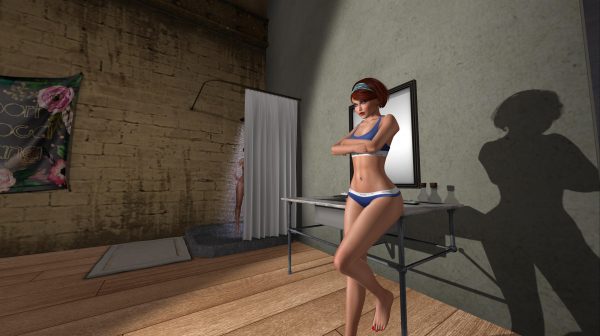 -“So what do we consider an item of clothing?” she asked.
-“I would say jewelry does not count … so it can only be actual clothes, such as a dress, a t-shirt, a bra, panties, our shoes and socks.” I said
-“We can remove socks and shoes separately? Does it work?”
-“Hmm no … we will have to remove both socks or both shoes at the same time … I would anyway be unable to play with only one shoe to be honest.”
-“Yes, very true!” she said finally exiting the shower, drying herself with her towel.

We finally got fully dressed in our tennis dress and looked at each other.
-“Ready Ambre?” I asked her.
-“More than ever!” she said with an enthusiastic tone.

And finally we were walking towards the most remote court … I expected we would be rather safe there. I started to feel very nervous and quite excited too.