The intern – Chapter 6: Embracing the culture

The intern – Chapter 6: Embracing the culture

I woke up the next morning with a terrible headache. I went to my bathroom and took an aspirin. I watched at my reflection in the mirror: was it me? Was it actually the same woman who flashed her boobs to her supervisor?

Yann pretended it was a common practice in the company but what if … he lied. What if I was simply a whore who cheated on her lover, or ex-lover. It was so long time I and Christian had a private time, did he still love me? Did I still love him? Oh shit that was too many questions for that early hour and I needed coffee in my system to be able to process the events.

A coffee and a shower later I had made my mind. I had to go and see Christian to expose him the situation. I was prepare to lose him but I could not leave with a lie between us. There was already a big lie between him and his wife about me, that was enough. Maybe I had been a cheater but so he was, he would understand … moreover he was the one working for that wicked company for years … it was actually possible that he was doing the same thing on his side … We definitely had to meet and discuss seriously.

We were a Friday and the company allowed us a dress-down on that day providing that we were not to meet any clients which was actually the case. I wanted to seduce back Christian and opted for a short ruffle skirt and a blouse … did I mention went to work commando? No? Well I did and I intended to tell Christian I was naked under that short skirt. I knew he would not resist touching me and I was craving for his hand there.

I arrived early at work and grabbed a coffee before I reached my office or should I say my box in the open-space. Sipping my coffee, I started to read my emails, there were not much honestly. I suddenly spotted one from Yann, with the urgency flag set. The title said it all.

“Come to my office as soon as you arrive” it said.

The message body was actually blank. I jumped on my feet and made my way to his office. He was on the phone but he motioned me in. I pushed the door of his office and closed it behind me and stood there waiting for him to end his conversation. It did not last long and soon he hung up. 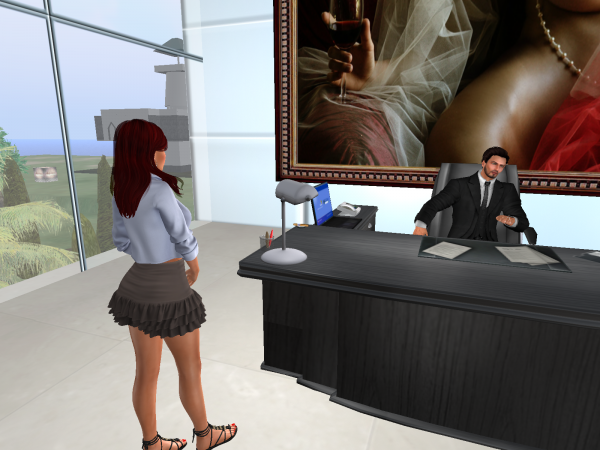 -“Catherine, you are at the office already, excellent!”
-“Yes … well I had enough sleep I guess” I replied.
-“Good, good! We have a lot of work today, come here!” he said tapping on the surface of his desk.

I sat there and he started to explain what was expected of me … and it was indeed a huge amount of work. I surprised him looking at my legs a few times, legs that I kept crossed as I did not want him to detect my little secret. 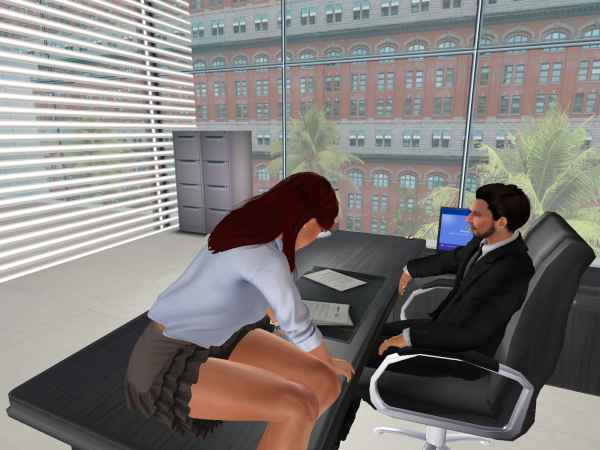 -“I like the way you dressed today Catherine … a lot less conservative” he commented in the middle of his explanations.
-“Oh … well thank you. I … I heard your advice of yesterday actually.”

He stared at me for two or three seconds and finally commented with a smile:
-“Good! Really good! So ……” and he continued his detailed explanation of the hectic program I would have to follow for the day.

Despite the fact that I had to keep focus on his instructions, my mind started to wander. Was he expecting more of me? Was I tested at the moment? I was probably tested all the time I concluded. I gave a sideways glance and saw that the blinds were closed and obviously the door too since I closed it myself. Still listening too him, I started to unbutton my blouse. He did not notice at first, I was getting nervous that maybe I was going too far but soon I saw a smile on his face.
-“I see your private lessons bear fruit” he winked at me.
-“I was not sure it would be ok” I admitted
-“Actually it is Catherine, I am just surprised that you … adopted our company policy that quick!”
-“Is that ok if I just remove my blouse… ”
-“Please do!” 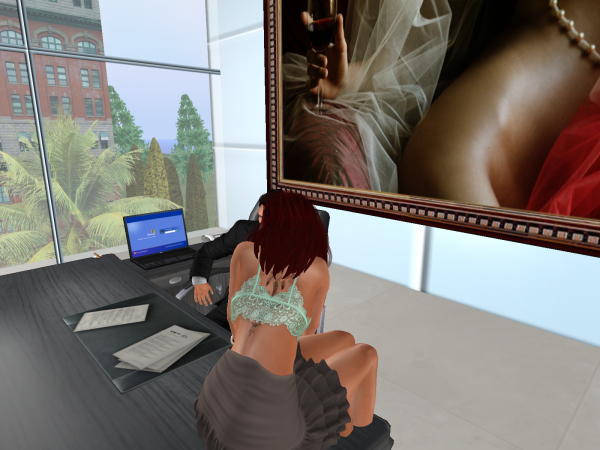 I removed it as the day before and folded it. He opened one of his drawer and invited me to depose it in. He stared longingly at my see-through bralette … then he recovered and continued to describe my missions of the day. Ten minutes later he was finally done, I asked a few questions to clarify some points and I was ready to start. I stood and reached out to the drawer to get my blouse when he put his hand on mine.
-“Don’t! Just not yet.” He smiled and stood. He grabbed my hand and led me to the sofa along the large window in his office. “Have a sit!”

I gladly sat and looked up at him. He smiled again and sat next to me. 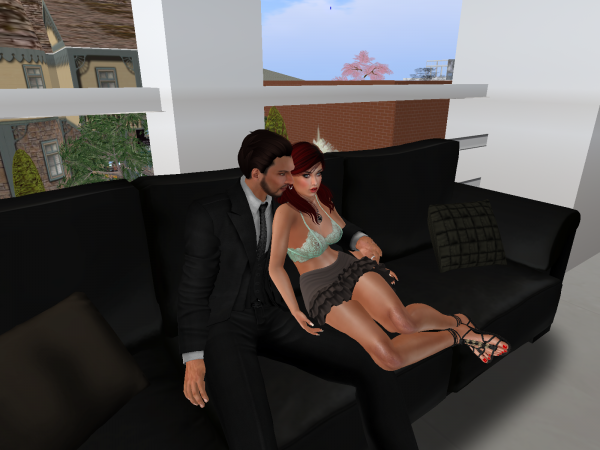 -“It’s as if I am dealing with a different Catherine today” he said. “What … what happened?”
-“I guess …well … I don’t know really. It’s just that I have a better … understanding of the rules … and well I felt it was the right thing to do today.”
-“It was indeed! I am very proud of your sudden progress.”
-“Thank you” I said appreciatively. I stared at him a few seconds and suddenly peeled from my bralette, putting it by my side. 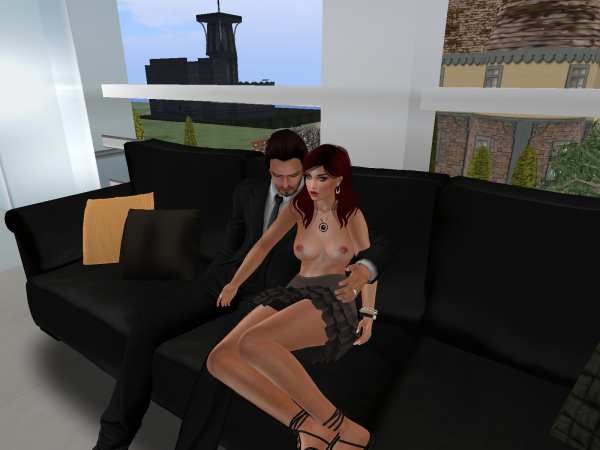 He opened wide eyes.
-“Wow Catherine! You really surprise me.”
-“Well I won’t go any further, you’re warned.” I giggled
-“I am fine with it.” He chuckled. “So are you still able to focus in that … lack of outfit?”
-“I guess so!”

He started to test me and asked many questions and details about what he explained earlier. Each time I answered sharply and apparently correctly.
-“Impressive! You’re a natural exhibitionist? Or maybe you’re a nudist?”

I told him the story of my first attempt in exhibitionism when I got nearly caught by Christian in the stairs of our building (see Flashing my landlord). Yann laughed all along the story.
-“Crazy! Christian knows you were actually flashing? Or does he still believe that you forgot your keys in your flat?”
-“I told him the truth” I admitted.
-“Amazing Catherine! So how do you feel now?” He asked.
-“Well … I am not so sure. It still feels odd to talk to you being topless, but you probably had that situation a lot?” I asked him
-“Well I cannot deny it is happening … but a lot, I would not say that.” He chuckled. “I admire your beauty anyway. Do you … do you think you could commit more?”

I looked at him perfectly understanding what he meant.
-“I … I cannot no, definitely not today!” I said.
-“Why not today?” He asked curious.
-“Ahem … because … I … I went commando” I said feeling my cheeks warming.
-“Ooh. I … I see. I won’t insist then. I am glad for the effort today. We’d better start to work now” he said standing. He helped me on my feet.

For a few seconds we were facing each other, our bodies nearly brushing against each others. I could feel his intense stare on my naked upper body and I could not deny I liked it… very much… too much. My hands slowly moved to the side of my skirt and I unzipped it, letting it fall at my feet, revealing my naked self fully to him. His expression was amazing: I could read mix feelings surprise, satisfaction and definitely lust. 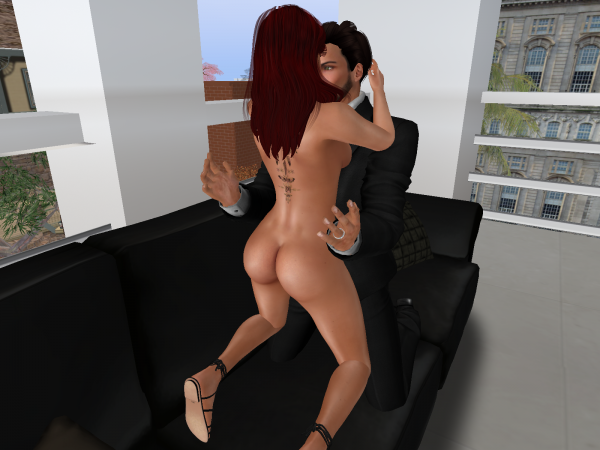 Without a word he pulled me towards the sofa again and we were both facing each others on our knees. He opened his arms and I stuck my naked body against him, giving him the tightest hug of all my life. His warm hands were on my back and I was shivering in expectations. A terrible feeling of shame invaded my conscience. I thought of Christian, what would he think, would he pardon me? Was it still important? I was lost, I closed my eyes and enjoyed the feeling of Yann against me … particularly a certain bulge which seemed to grow.

After long minutes we parted.
-“We better return to work” he said. “Thank you for the flirty moment Catherine. Know that I appreciated it a lot.”
-“So did I!” I said blushing and dressing back. He handed me over my blouse and I adjusted my outfit to look professional again… can we look professional to someone who saw you naked? That was a good question actually. I smiled for myself.

I was about to leave when he called me again.
-“Catherine?”
-“Would you accept a rule from now on?”

I looked at him a bit worried, did I do something wrong and upset him. I was wandering.
-“Tell me” I said in an un-assured tone.
-“Every casual Friday, I would like you to come in my office and let your panties in my drawer.” He stared at me very intensely. “Knowing you will be naked under your dress or skirt would really make my day.”

I looked at him, frozen for a few seconds and I simply replied with a smile
-“Ok”

I closed the door and went to my box working all the day. I did not even had a chance to see Christian as he left at lunch time according to his assistant. I really needed to talk to him and soon.