The intern – Chapter 1: Flashing my landlord

Read the next chapter
Read all the chapters of the story

When I was a student I used to live in a small maid’s room on the eighth and top floor of an elegant Hausmanian building in Paris. My landlords were a couple in their late forties – their two elder children had flown the nest already. Their third, a girl a few years younger than me, was still living at home. They were a nice couple actually, very gentle and caring with me – him in particular. I sometimes felt like one of their daughters. It was a good experience living there – I had left my parents hundreds of kilometers away in order to study in Paris, and they made me feel like I had a second family.

I was a serious and well-behaved student so I guess they appreciated me for that as well. I was well-behaved as far as my studies went but I already had these exhibitionist fantasies, and this was when I started to experience them: I was not living with my parents anymore, I was free and had my own little room … I guess we all start to expand our horizons at this point in our life. It started with pretty innocent games in the beginning, I just spent time at home in my “Eve” outfit – doing chores or studying is definitely more fun in the nude, don’t you think? Besides, the summer weather was back and the temperature in my room often rose above 25C as I was living directly under the roof of the building.

As time passed I began to feel more daring and started to imagine bolder scenarios. I wanted to leave the security of my room and take bigger risks. So I dared myself to do more risky things. I used to leave my room and wander on the landing in my undies. It was a little risky as my landlords and I were not alone in the building: there were six other apartments in the lower floors and we all shared common stairs and a common ground floor where the mailboxes were installed. The risk of being caught was pretty low as my maid’s room was on the top floor and was the only inhabited space on that floor. Across my landing was a single door leading to the attics, but very few of the inhabitants were actually storing things there.

But one day I dared myself to do something a little too bold and it led to a very embarrassing situation. It was the morning of a hot day during summer and most of the inhabitants were on holidays or had left for work. It was quiet in the building and I felt like I was alone there – the perfect moment to try something completely crazy, a dare I had fantasized but always discarded: too risky, I used to say to myself. But that day was different as I felt I was probably alone. I wasn’t 100% sure but that’s what made it interesting and exciting. I decided to give it a go: I went fully clothed down to the ground floor, paying attention on each landing to any noise that might have revealed someone’s presence … it seemed I was actually alone. Once downstairs, I slipped my room key into the slot of my mailbox and went back upstairs to my room. I stripped down to my undies, took my mailbox key, and left my room … without giving it too much thought I closed the door behind me, which meant I was locked out of my room. My only way to get back in was to fetch the key in my mailbox on the ground floor: I still remember how frightening and exciting it felt. 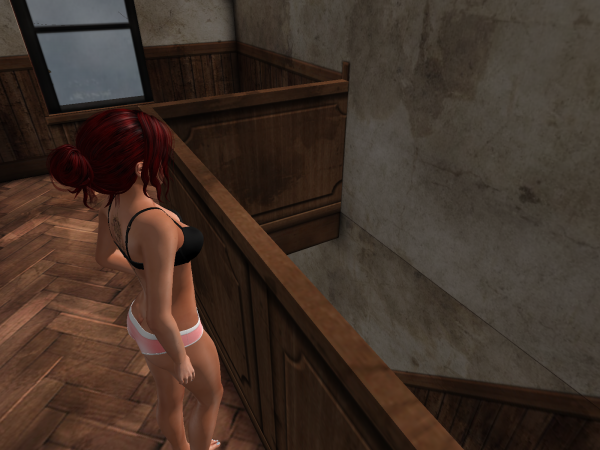 Cautiously and as quietly as I could manage I started my descent. Each creak of the wooden floor made me jump in fear, it was so exhilarating. I passed each landing, one by one, fearing the worst, but enjoying every single second. I was in heaven until it all turned suddenly bad. 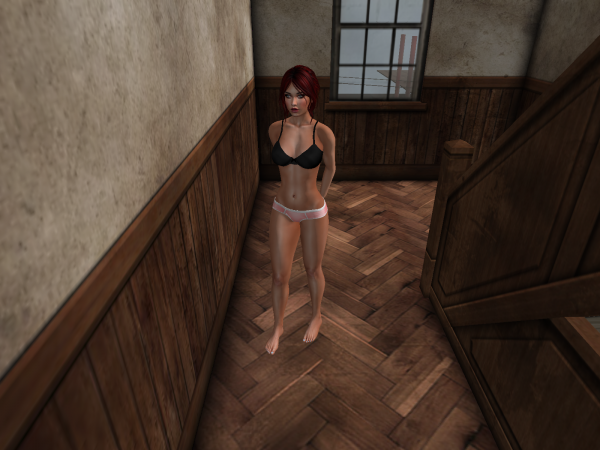 I was reaching the second floor when I heard the electric buzzing of the entrance door: someone was entering the building! There were two possibilities: either it was one of the inhabitants who typed the code to enter or …. worse … someone in one of the flats opened the door remotely to let a visitor in.

I turned around and leaped up the stairs. I did my best to conceal my presence but my first objective was to reach my floor. I risked a quick look over the guardrail and spotted the visitor: it was the postman! It confirmed my worst fear – someone had opened the door for him, someone who could potentially block my retreat. I dashed up the stairs without thinking, hoping the noise I was making would not cause the person who let the postman in to open their door. Out of breath, I finally reached the top floor, but I didn’t have my key so there was no way for me to get in my room. I looked down the stairs and saw the postman climbing the stairs. He finally stopped at my landlord’s doorstep, one floor below me … they were not supposed to be at home! Shit! I was in serious trouble. 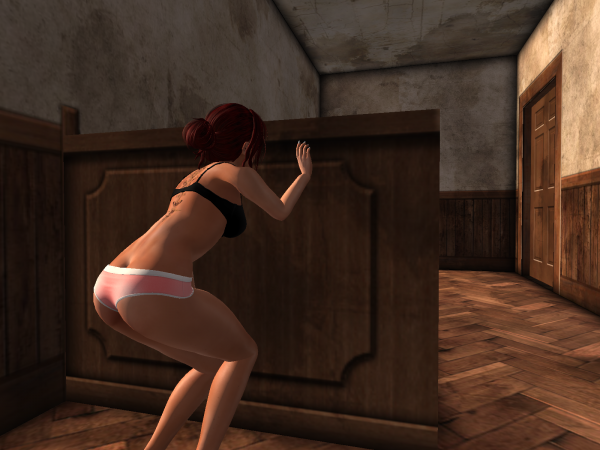 The postman rang the bell and my landlord opened his door. I could hear them talking.
-“Mr. Vincent?” asked the postman.

-“Yes! It’s me.” said the male voice of my landlord. I was terrified. Why was he not at work?

-“There is a parcel for you.” said the postman.

-“Oh, there is another parcel for Miss Palen, do you know which floor she’s on? I forgot to check when I came in,” said the postman. I was petrified! My books had finally arrived … but I was horrified, I was about to be discovered.

-“Oh, she’s one of my tenants. Leave it with me, I will bring it to her. She’s upstairs, I’m not sure if she’s here now.” he replied. I sighed with relief. There was a chance of getting out of this without being discovered. All I had to do was stay hidden and let him go when no one answered my door.

-“And you!” replied my landlord. I heard the footsteps of the postman going down the stairs. A few seconds later I heard my landlord’s door opening and closing, then the very distinct sound of someone climbing the stairs. 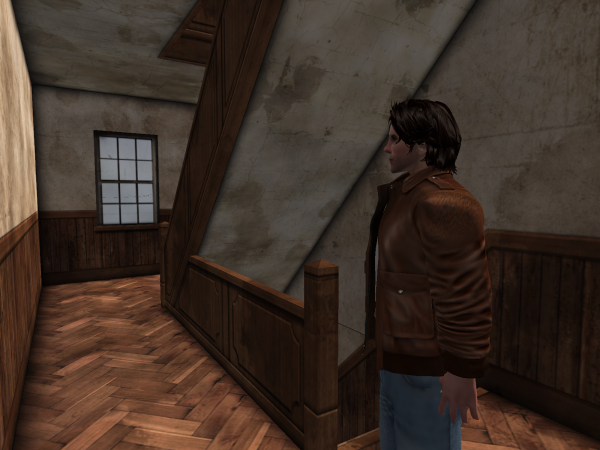 I crouched behind the stairwell panel and held my breath. There was a knock on my door.

When I didn’t answer he knocked again.

-“Catherine?” he repeated, pausing again. “Strange . . .” he finally whispered to himself. 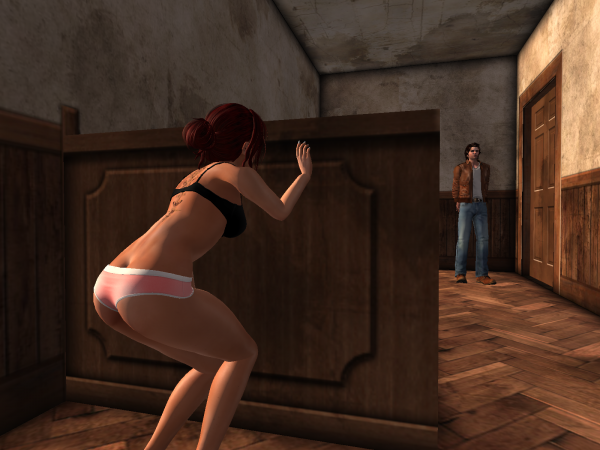 He finally started walking back to the stairs. I was frozen in my crouched position, my eyes closed, my heartbeats so loud that I wondered how he did not hear them. My left leg felt a bit sore due to my uncomfortable position, so I switched my weight to my right one, which made a horrible creak in the wooden floor. His footsteps stopped.

-“Who’s here?” he asked. I kept silent. “Who’s here? I know there’s someone!” he insisted, walking toward me.

In panic I spoke without revealing myself.

-“It’s me … it’s Catherine! For god’s sake do not approach!” I said in a panicked tone.

-“What? What’s going on?” he said, still approaching … I looked up and there he was looking down at me huddled behind the stairwell panel in my underwear, surprise on his face. I raised up, doing my best to hide myself with my arms and hands, my face beet-red with embarrassment. 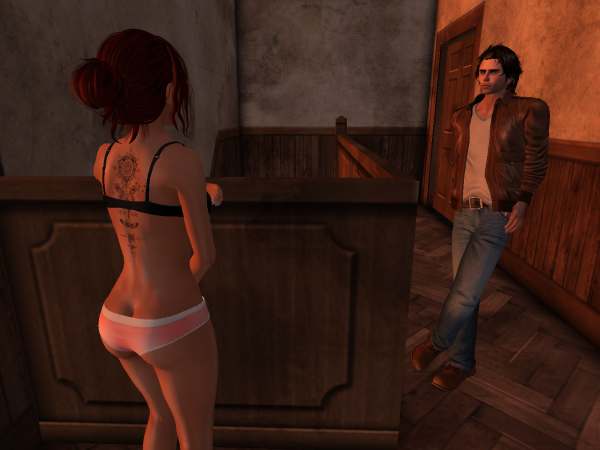 My landlord hesitated a second, then laughed. I gave him a timid smile.

-“What happened to you?” he finally asked. 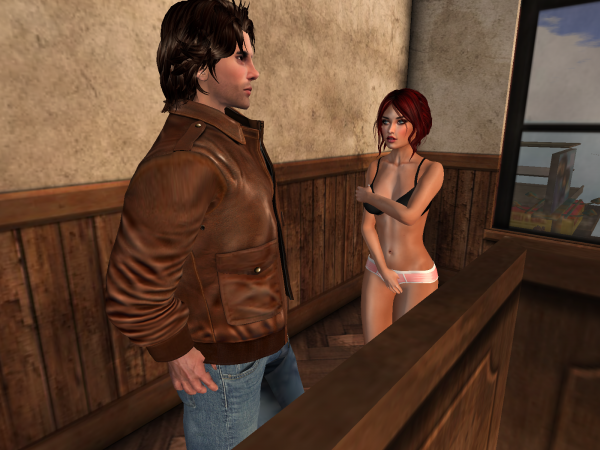 He laughed again, amused by my misadventure. He seemed to believe it was just an accident. I wasn’t faking my embarrassment of course, I was really quite ashamed to be seen like this…. at the same time it was very arousing, I could feel my nipples hardening under my palms.

-“Okay, let me grab the spare key,” he said, heading for his apartment. A minute later he opened the door for me with a smile. I could feel his exploring gaze on my nearly naked body.

-“It’s ok Catherine,” he said with a reassuring smile. “It can happen … I have daughters you know, and … well, I’ve already seen it all!” he winked.

I smiled and nodded. He handed me my parcel and I closed the door. I waited for him to leave, then fell on my bed, shocked and amazed by what had just happened. It was so thrilling that I knew I had to try it again. This was the event that launched my “career” as an exhibitionist.

Read the next chapter
Read all the chapters of the story

2 responses to “The intern – Chapter 1: Flashing my landlord”