The intern – Chapter 2: A night out in the rough area

Chapter 2: A night out in the rough area

My relationship with my landlord, Mr Vincent, completely changed after the first episode, and we eventually became lovers. I think I was really in love with him, but for him I was no more than a sweet distraction from his boring life – nothing more, nothing less. I should have been more careful with him: it ended badly and I got seriously hurt when he dropped me. I still feel pretty bitter about it, but I have sweet memories of some very hot moments to console myself. Let me tell you some of those:

It was the end of summer, his wife had not yet returned from holidays, and he was home alone. I had just returned from holidays myself and of course we had to make love again – but this time in his flat, in his bed! It was so crazy, his wife could have decided to shorten her holiday to surprise him and caught us, but I really loved the thrill of it.

A few days later, he knocked at my door and told me he wanted to go out with me. I was a bit worried that we might encounter some of his acquaintances, but he argued that where we were going the risk was very limited. So we went.
He did not tell me where we were headed until our train reached a stop and he whispered in my ear: 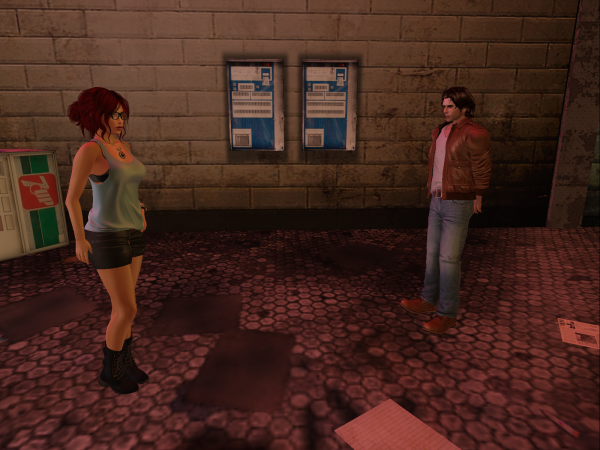 I raised my eyebrows, a bit surprised.
-“Really?”
-“Really!” And he pushed me out of the coach. 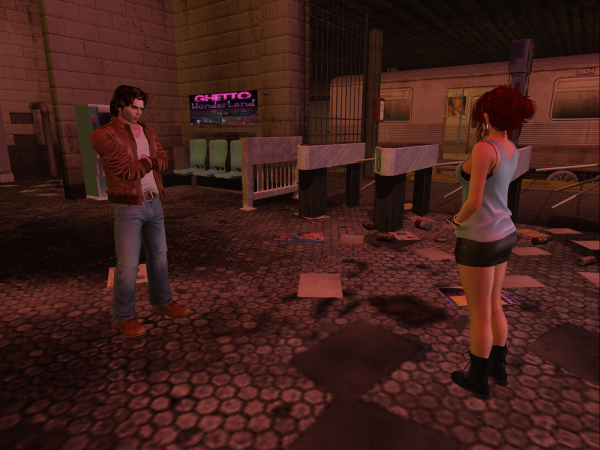 The stop where we alighted was known to be the rough part of town. Everything you could imagine was there: prostitution, drugs, illegal gambling, everything! We made our way to the surface and the area was indeed exactly how I imagined it: dirty and littered, with prostitutes all along the street. Needless to say I was afraid, I would never have dared to wander those streets alone. Mr Vincent felt my nervousness and took my hand as we made our way. 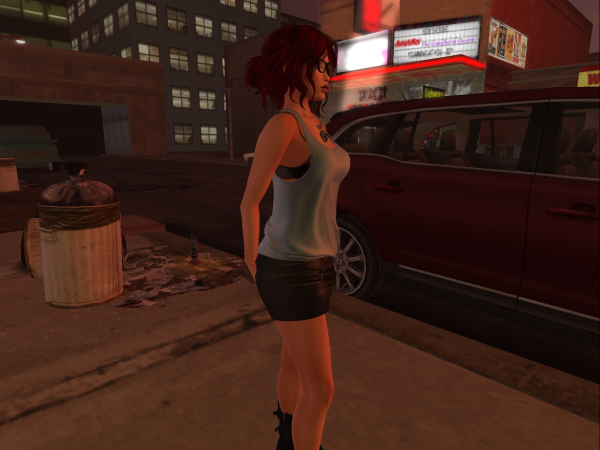 -“Do not worry, Catherine! This is a bit shocking the first time, but nothing has ever happened to me here.”

A few minutes later we were entering a sordid sex-shop. We made a full tour – gosh, that was my first time in such a place, some of the items were a bit outrageous. It made him laugh each time I asked a question about one item or another. 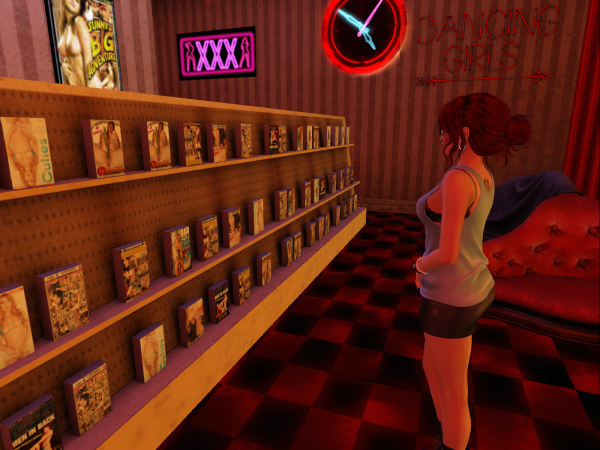 I felt ashamed and self-conscious at the beginning, but I finally got more relaxed and began to actually enjoy the visit. 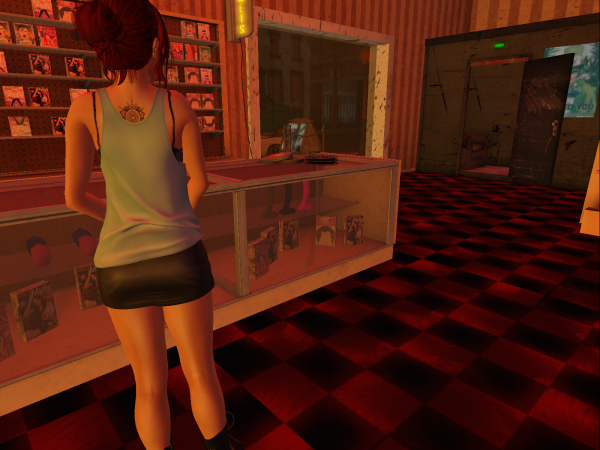 We finally made our way back to the tube station.

-“Thank you!” I said while we were walking.
-“You’re welcome! It was very amusing to take you there.”
-“It was an interesting experience” I said with a shy smile.
-“Would you like to give me a little gift too?” He asked.
-“Certainly, if I’m able.”
-“Ho don’t worry – you are!” He replied, making a pause, ” . . . would you give me your panties?”
-“You mean now?”
-“Yes, now, why not? I will warn you if someone’s coming,” he said as we approached the entry of the tube station.

I took a few steps down the stairs and looked around. He was still at the top of the stairs.

I hiked up my skirt and grabbed the waist of my panties,pulling them down as fast as I could. Of course those damned things got stuck on my shoes. I started to panic until I finally managed to remove them completely. He joined me and I handed my panties over to him. He took them and stuffed them in his jacket pocket.

-“Thank you!” He said with a big smile.
-“That was crazy!” I said, giggling like a schoolgirl.
-“Yes! That’s why I like you, you’re a naughty and crazy girl,” he winked.

We arrived on the crowded platform, and the train was even more packed. Apparently an incident down the line was severely delaying transit. We waited patiently for fifteen minutes while Mr Vincent took every opportunity to grope my bottom through my skirt – not that I was complaining, quite the contrary actually. The experience at the sex shop and going commando was pretty arousing so I was definitely in the right mood.

They finally announced that the line was interrupted until further notice. People were furious and started leaving the platform and the train, probably looking for alternate transport solutions. After ten minutes there were only a dozen of us still waiting.

-“What do we do?” I asked him, “I seriously doubt the service will resume.”
-“I think you’re right – come!” he said, grabbing my hand and pulling me, to my surprise, towards the head of the train. We entered an empty front coach, where he pulled me roughly against him. “I can’t wait for us to get home” he said smirking.
-“What?”
-“You know what I mean,” he sneered, pushing me against the vertical stanchion for standing passengers. 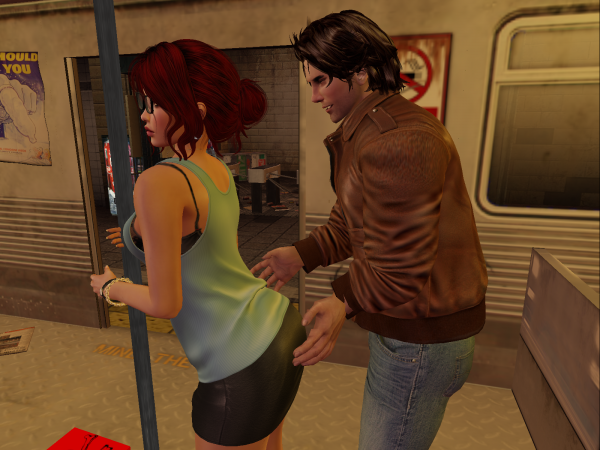 He took my ass cheeks in both hands and squeezed, crudely laying claim to me. His hand went under my skirt and brushed against my exposed labia. I gasped in surprise.

-“You cannot deny you’re aroused, Catherine … you’re dripping wet, my little exhibitionist!” he chuckled. He pressed himself against my backside and I could feel his manhood through his jeans, poking against my ass crack. 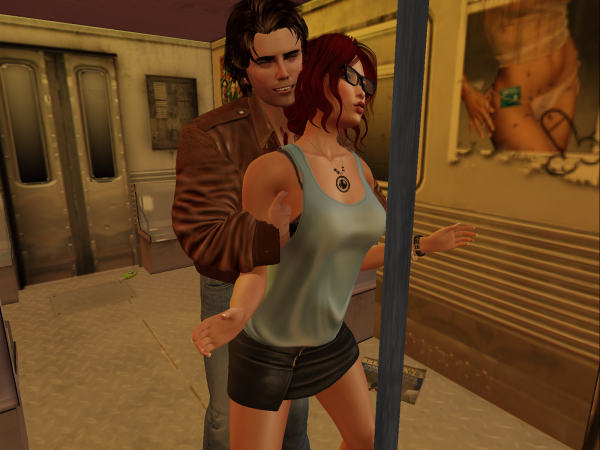 I was definitely very excited and could feel he was as well. My whole body was trembling with lust, I should have fought him but I couldn’t. I looked around, anxious that we might be caught any moment. Only a few passengers were still on the platform, at the tail of the train, but still it was quite risky. 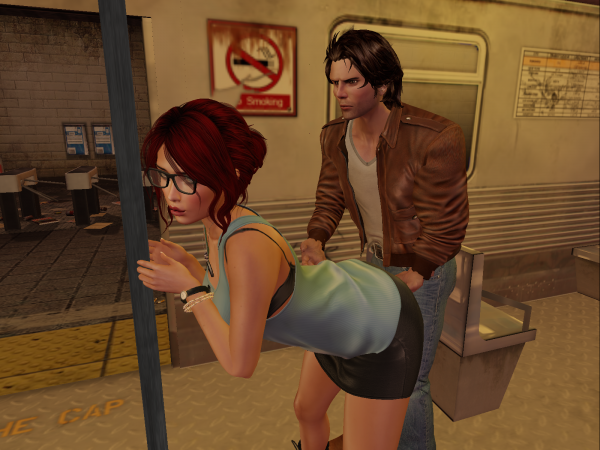 I grabbed the stanchion firmly and bent over. He shoved his foot against my left ankle and spread my legs apart. I heard the tinkle of his belt buckle unfastening, then his zipper. Seconds later the head of his cock was pressed against my labia, seeking its target – it was warm and hard. I grabbed his erect member from behind and directed him straight into my vagina. He pushed in all the way and there we were, fucking in the tube. Just the thought of the situation we were in made me crazy, I had to stifle a passionate moan to avoid alerting the other passengers. 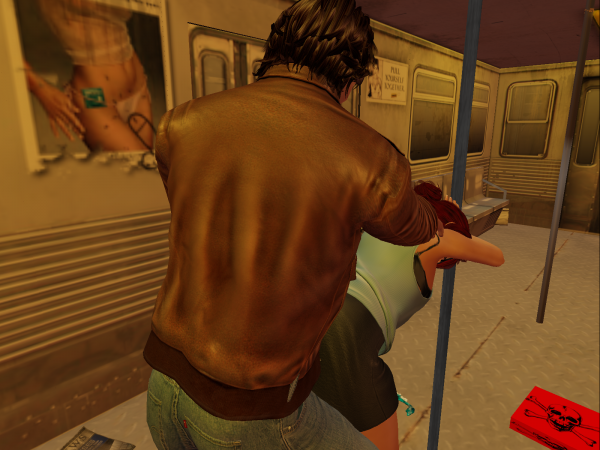 -“Can I have my panties back, please?” I asked, gesturing towards my thighs.
-“Hmm no, a gift is a gift” he said, chuckling. 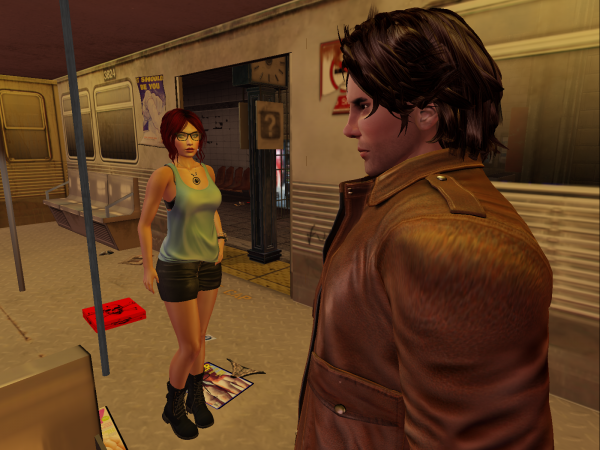 I looked at him aghast when I saw he wasn’t joking. I had to clean myself up with a paper tissue he handed me.

-“We will take a shower at home to fix that,” he said, watching me. “Now come, I will call us a taxi.” He grabbed my hand and led me out of the tube station.

I spent the whole journey worrying about someone noticing my dripping condition – to my relief everything went well. We reached our block without any problem and well … we spent a very hot night in the family flat. I knew I would never forget that night. I am probably such an addicted exhibitionist because of it.

I hope you liked this little story. As usual I am eager to read your comments and reactions. Anything as long as it remains constructive.

Credit to Dave who fixed all my English mistakes.

2 responses to “The intern – Chapter 2: A night out in the rough area”