Ambre and I did not meet up over the weekend, we both needed time to digest all the recent events, and I knew Ambre needed some time for herself to process things… So I did not contact her, and she did not call either. I was not really worried, maybe just a little sad… maybe I should have called her too, was she expecting it? 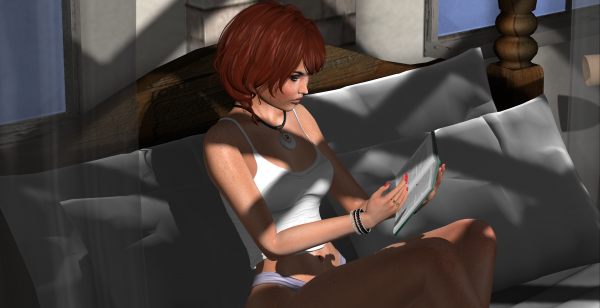 When I arrived Monday morning, I saw Ambre’s vest on the back of her chair so I knew she already arrived. I logged in and started to work hoping to be able to catch up with her around a coffee soon. Unfortunately I did not see her the whole morning. She eventually arrived in her cubicle a bit before noon. I could immediately see that something was wrong. She had that worried face and she did not even try to say hello.
-“Is everything ok?” I asked
-“Yes, yes it’s ok” she replied curtly.
-“Ok ok, good then” I said a bit surprised by her tone.
-“We better get to work, we have a lot to do” she said sitting at her desk. 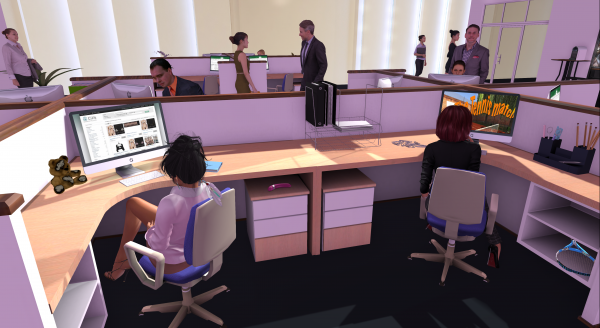 I thought for myself that I did not really wait for her. She was really acting strange, I did not worry first as I thought we would be able to talk about it later or when the day would be over. She disappeared a few times for long period of times and I imagined she was probably having her period which could explain the mood and the long breaks but for some reason I felt it was something different. She finally went in the conference room with her laptop and spent the rest of the day working on something from there. Strangest thing among all was that Larry was frequently checking on her. What was going on? Was Larry torturing her with some of their HR training … after the events of Friday he might have found a way to avenge himself. I shook my head, poor Ambre. It was starting to be very late, Larry did not seem to be around and the office was nearly empty. I decided to see if she was ok as I planned to return home soon. I pushed the door of the conference room and entered. Ambre was sitting on the other side of the table. She raised her head from her screen and shook her head with a frown on her face. 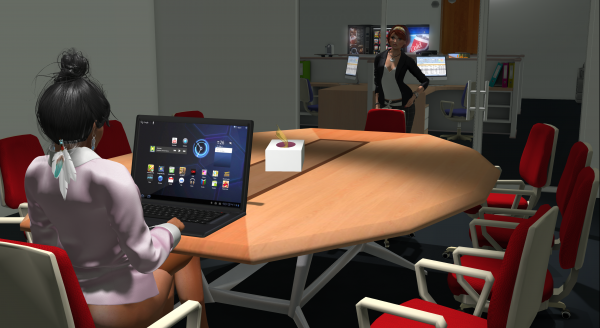 -“Not now Catherine, I’m busy. Send me the status of the day by email before leaving. Have a good evening” she said without letting me time to say a thing.

I felt my throat tighten and my eyes filled with tears. Why was she suddenly so hard and bossy? Why does she call me Catherine, it’s so formal. She did not call me like that since my first day at the office.
-“Ambre is everything ok?” I managed to ask with a croaked voice trying to take back the control of my emotion.
-“I said not now Catherine. Good evening.” She returned her gaze to her screen ending the conversation.
-“Good evening.” I replied leaving the conference room and quietly closing the door behind me. 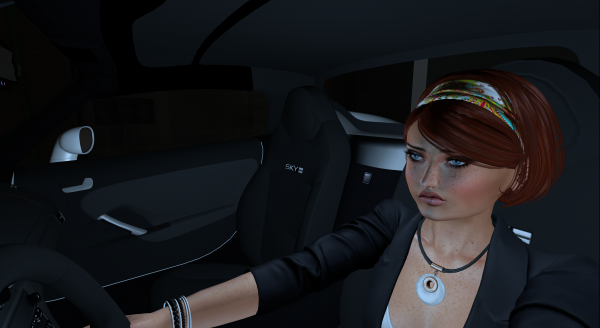 On my way home, I started to imagine the worst scenarios: she did not love me anymore or I did something to her without realizing it … what could it be? Those questions kept my mind busy during a good part of the night. I woke up the next morning wondering if all this has been a nightmare but I soon realized this was not. Ambre was still cold and distant with me when I arrived, barely replying to my “good morning”. I desperately tried to make her talk but did not manage much. She was moreover dressed in a way I never saw her at work before. She used to be quite conservative but today it was … well it was showing a lot of skin, it was an outfit I had seen on her in private, but here at work it was bold. However it seemed to make the men of the office quite happy and me very jealous. Larry was back to his flirty tactics and Ambre responded positively. What was happening?

Suddenly a dark thought came in my mind and started to haunt me: what if Ambre was trying to put some distance between us to save her position, what if she was putting her job before our relationship. What happened on Friday evening had the immediate effect to make our affair public. Nobody openly talked to me about it but I was pretty sure people were talking in our back. Despite what everybody might think, those relations are still not very well accepted. So perhaps Ambre was trying to get back on Larry’s good side. Which meant … she was dumping me … was it this? Sadness started to fill me up at a very quick pace. I made the same big mistake to engage with a colleague and I was about to pay the same price. Why was I so stupid? But maybe I was wrong too, maybe it was something different and all will start over again. Oh god I was lost. I returned back home with a heavy heart and dark thoughts which did not quit me the whole night. Drugs helped me to find sleep and relief for a few hours. 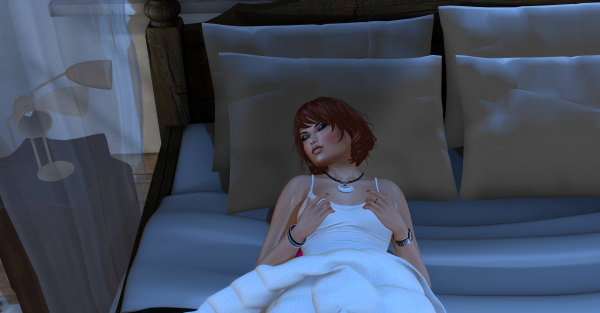 The days went by, the next day alike the previous one. I was driven crazy and sick by Ambre’s behavior. She and Larry seemed to be the best friends in the world now. She did not answer my calls, my messages and my emails. I tried everything to have a conversation, she ignored me. I was in hell, suffering, could she not see it? The last day of the week finally arrived, one week in hell. I left work late after having wait for Ambre in the hope that I could talk to her but it never happened. Halfway in my commute I realized that I let my keys at work and furious against myself I turned back. The office was empty and my keys were in plain sight on the top of my desk. I sighed, I was really distracted these days. I grabbed them and made my way to the bathrooms.

I was about to push the door of the ladies when I heard her. Ambre, it was Ambre moaning on the other side of that door. There was no doubt possible I knew pretty well how she sounded like in those moments. Very cautiously I put my ear against the wood of the door. She was not alone, I could hear a male voice, I was unable to hear what he was saying but I am not sure I actually wanted to know. My worst fear came true, my world collapsed in seconds. 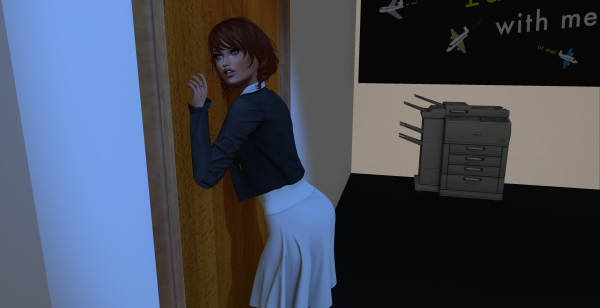 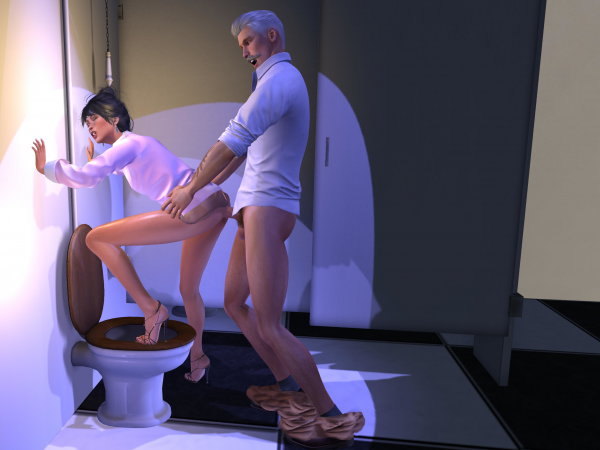 I should have left, and make my way home, that would have been the sensible thing to do, but no, I stayed. I hid under a desk and wait for them to … to finish. I was in shock, my hands shaking and feeling nauseous but I had to see, I had to confirm it was Ambre, that our story was over. Moreover I needed to know who stole her from me, even if I was already pretty sure of who it was. They finally went silent, a few minutes later, the door opened. I cautiously stuck my head out to see who it was: Ambre! I was right. She quickly walked to her desk fetched her things and made her way to the exit. One minute later, the door opened again… it was the instant of truth. I stuck my head out again and could see him. If my stare could kill, Larry would surely have died in that instant. With the assurance of a satisfied man, he slowly walked to the exit, whistling a stupid song. 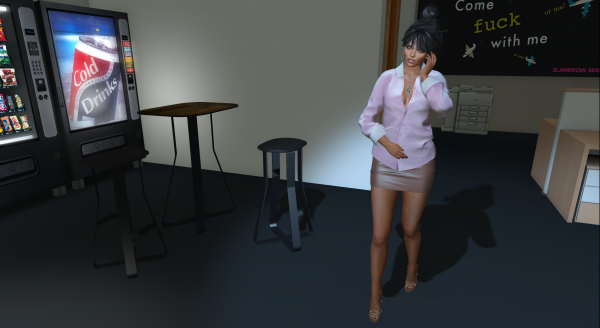 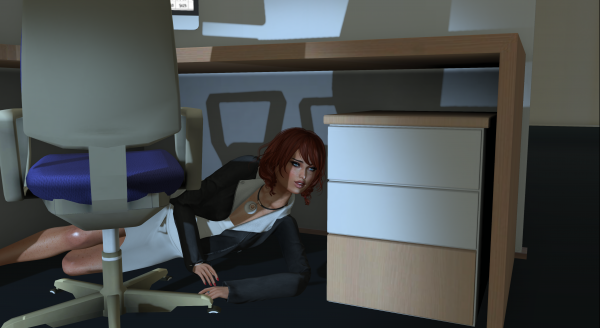 I wait for ten minutes and sneaked out of under the desk. I made sure they were both gone and finally left the office and the building. I returned home though I could not remember how, my mind was elsewhere, my heart was destroyed and it would take months to fix it, was it even possible? I did not leave my flat the whole week-end, mourning my lost love, crying a lot, watching stupid series, crying a lot, reading a crime novel and … crying a lot. I came to the conclusion that if there was something to hate and blame for this disaster, it was myself, my dumb self who got caught in another stupid drama. I was not in a particular hurry to return to the office and took my Monday off, pretending to be sick… was I actually pretending? I probably was for real. I did not know how but I knew I will have that conversation with Ambre and tell her that she did not need to hide from me anymore, I knew, I knew all. Or so I thought. 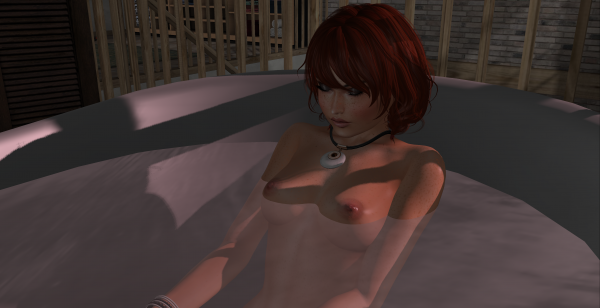 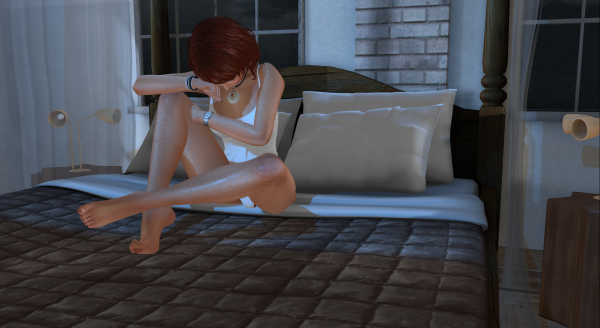 One response to “Mischief at work – Chapter 2: Betrayal”