The Mysterium Masked Mansion – Three is the charm

Sometimes, on boring and rainy week-end days, I sit on my comfy sofa and look at my photos albums, an audio headset on my head playing inspiring tunes. I have many albums and I actually like to kill time looking at those pictures, each of them reminding me a different story of the past. Maybe unlike more formal people, I have my secret albums … the ones I will never dare to share with my friends or family … but with you my dear readers that is a different story!

It was actually some time ago: the mansion was at the time still the only place of the sim. There is now a lot of different options available to the visitors: a swinger club, an hotel, a beach … And at the time they had setup that changing room I liked so much. This is probably the reason I am telling you the story today, this changing room had an atmosphere. The anticipation of what was about to happen after I would have passed the door was very vivid, very exciting. It is so sad they decided to remove it … I guess the need to reduce the prims killed it, I do not see any other good reason … maybe one day I will ask Uri Jefferson (the owner of the sim) the actual reason.

Anyway, that is not what I wanted to tell you, so let’s get down to business: I arrived at the mansion quite early, I mean before the busy times, or maybe after, anyway I was definitely alone. I entered the changing room and smiled … I was there again and I felt this arousing anticipation sensation again … I liked it so much. I took my time to enjoy the tiny but comfy room and did what was expected of me there: dress appropriately for the mansion. The dress code was quite strict: ladies were to wear black panties and a mask and nothing else. Most of us wore as well heels and stockings which were actually tolerated, welcomed even. Men were to wear a black tie or a formal costume. One day they should organize a reversed party where we would wear the formal dresses and the men the black thongs … I am quite sure it would have a lot of success. However it was not the case that night.

Once dressed, actually undressed, I sat at the dressing table and worked on my make-up. I knew most of it would be hidden behind the mask but I still wanted to look perfect. I even painted my nipples: being topless and masked made them all the more important don’t you think?

I then sat on the sofa, listening to the noises of the mansion: fainted footsteps, wooden floor creaking, doors opened and closed … it seemed to me maybe people were starting to arrive. I smiled to myself, action was about to start … maybe on the other side of the wall, in the gentlemen’s changing room, a few men were preparing themselves. I shivered in anticipation, a warm wave went through my navel.

Suddenly the door opened, a woman entered and smiled to me when she noticed my presence.

-“Hi!” she said nodding at me. “It seems pretty calm today”
-“Hi, yes it is … I think people are starting to arrive” I replied.

Just at this moment we heard loud laughter coming from the other side of the wall … men!

-“Hmm yes it seems we have company” she said winking at me.

She moved to one of the dressing table, putting her bag on the floor at the side of the seat and started to undress. We kindly chatted while she was getting herself ready. We never exchanged any name, that was one of the main rule of the mansion: anonymity. We stuck strictly to it. Finally she was ready. 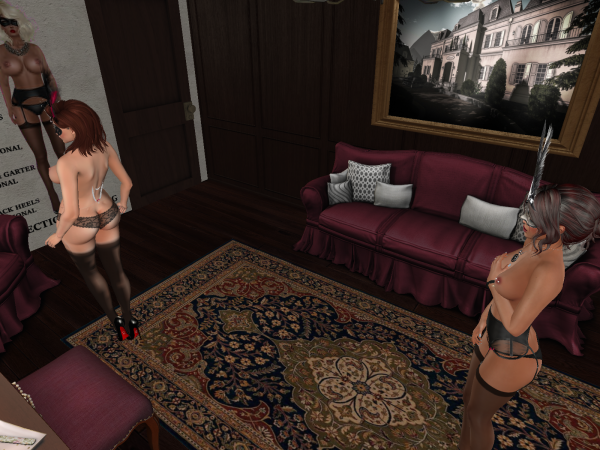 -“Should we go find those gentlemen?” she asked with a bright smile putting on her mask.
-“Definitely!” I replied putting mine on.

She led the way and opened the door leading to the main hall, I followed, closing the door behind me and we moved further in the maze of luxury rooms of the mansion. We entered in one of the main salon and I was approached by a man with a golden mask. My new friend smiled and continued her way winking at me, to wish me luck I guess.

The man was very elegantly dressed, I liked the low timbre of his voice, his stature and his direct stare. He acted, as most men of the mansion, as if we were discussing at a posh reception, as if I wore an elegant gown… of course I caught him a few times looking at my naked breasts, but it was all the more enjoyable. He was a gentleman really, complimenting me on my choice of lingerie and appreciating my figure and my painted nipples. It was as if he was commenting on my dress … it was not rough, it was elegant, well said and amazingly erotic. Unfortunately the man had to leave.

-“I hope to see that superb mask again soon” he said before leaving with a bright smile. I was delighted and blew him a kiss as he was departing. 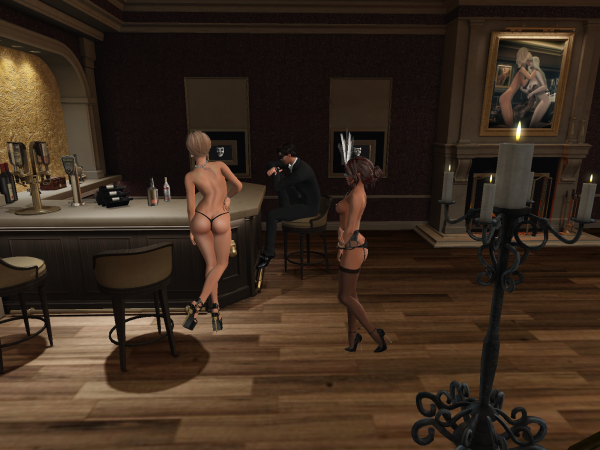 I then roamed the mansion’s corridors and salons, the place was not empty but far from crowded. I passed a couple chatting at the bar, further two women in a dark corner were engaged in a passionate hug. I finally entered one of the main salon, a room I particularly enjoyed for the devices it contained: a few bondage wooden frames  and various cages … of my little experience at the mansion, I have never seen anybody tied or caged but the simple thought of the possibility gave me warm tickles down there. 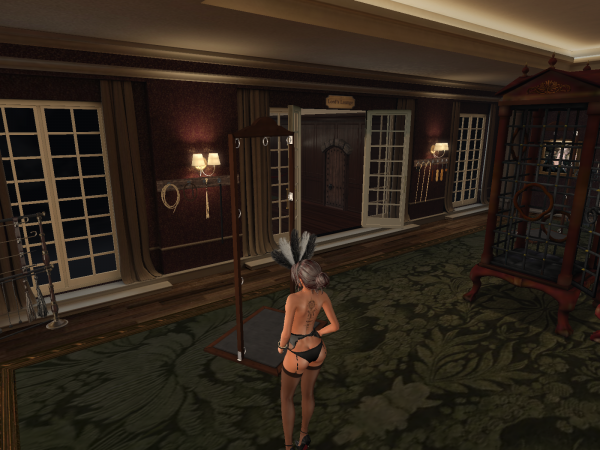 Minutes later I saw my change room friend. She was comfy in an elegant sofa and waved at me when she saw I was alone.

-“Where is your charming prince?” she jokingly asked.
-“He had to leave unfortunately” I said shrugging.
-“There’s plenty more fish in the sea, no worries dear.” She winked at me and I winked back at her.

I lay down on a nearby sofa and we talked of our past experiences in the mansion. She had the same feeling than me about the fact people were really different here … smart and classy and this why we both liked the place. We were in the middle of our conversation, and another gentleman entered. He politely nodded to me and crouched by my friend side … he started to whisper things in her ear and it made her giggle … a flirty whispering conversation started between those two and I was about to leave them some privacy when he finally helped her on her feet and taking her hand, he led her elsewhere. Just before she left, she turned her face to me and waved. She had definitely the expression of someone who was about to have a fun time. I sighed … I wished it would be my turn.

I put my chin over my hands and let my mind wander in lusty fantasies. I was starting to get inspired when the thick silence of the room was broken by a woman moaning in the distance. I wondered if it was my friend and smiled to myself.
-“Someone is having fun it seems” said a male voice behind me. 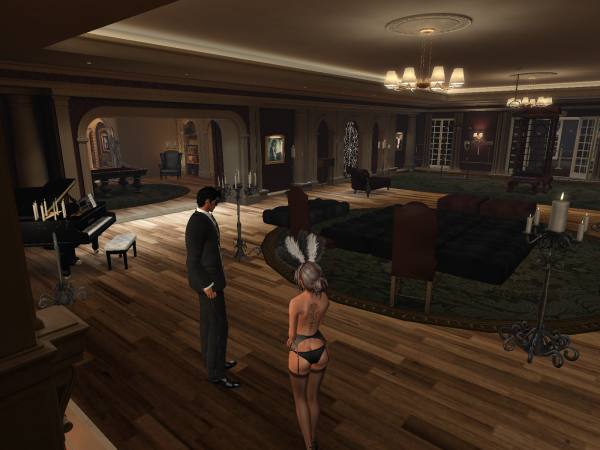 I did not hear him arriving and smiled to him.
-“It seems so indeed” I said.
-“Would you like to dance charming red head?”
-“I … I would like that very much!” I said.

He took my hand, helped me to stand and led me to the swimming pool room … it was deserted but the two of us. The music was nice, romantic and not too loud, we were able to communicate without shouting. Dancing with him was really enjoyable, being topless adding to the fun. I shivered at his warm hand on my bare back, I smiled at his unintentional touching of my breasts, my skin was covered in goose bumps, my nipples were erected … I was showing all signs of my arousal. Judging by his bulge, I knew he was attracted as well.

After the fifth song, my legs went sore, dancing in high heels is not easy and is definitely strenuous. We paused and he looked at me with concern.
-“Are you ok lovely lady?” he asked me with a charming smile.
-“I … I am. Thank you.”
-“Should we stop?”

I stared at him and applied my palm on his crotch.
-“I think we should.” I said.

He took my hand and led the way to the nearby sofa. He sat and grabbed both my hands to pull me to him. I was facing him, my knees on the sofa, he had my boobs right in front of his face. He took his time to watch them, then he raised his stare to my face.
-“Do you like them?” I asked
-“Oh definitely young lady.” He chuckled.
-“Touch them!” I told him feeling more and more naughty. 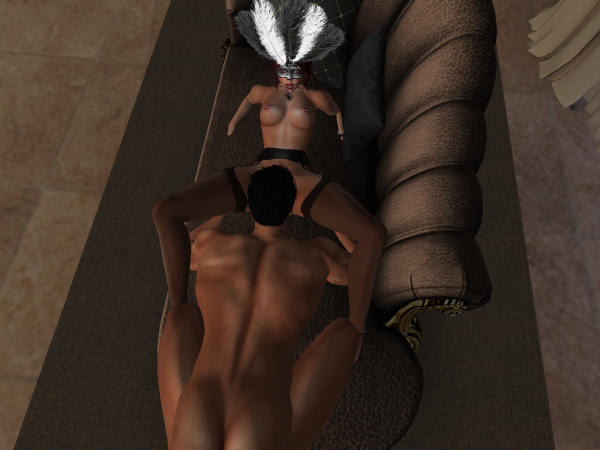 He flipped me on my stomach and set himself over me. He directed his enormous penis between the fold of my labia slowly pushed in. I looked in front of me aghast. It was really an amazing feeling. He pushed all the way in and paused.
-“Feeling it?” He chuckled
-“God yes.” I said

Finally he started to move in and to actually fuck me. It was amazing, I felt his full weight on me, it was not very comfortable but I liked it very much. I never thought I would come again but I did. When he felt me climaxing again he pounded me even harder and came at his turn. I stayed still for one minute, eyes closed to recover from this incredible experience. 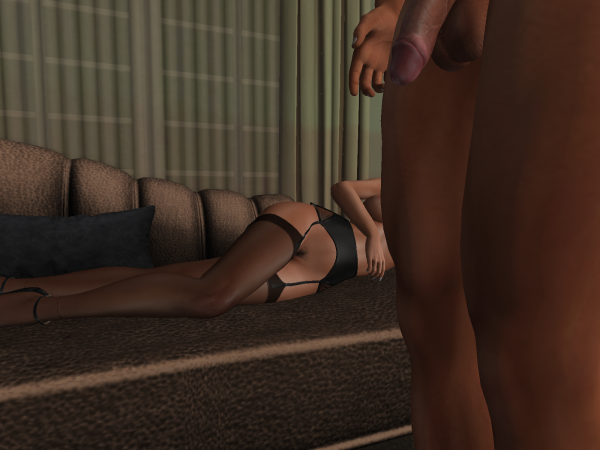 He stood and dressed back. He planted a kiss on my cheek, ready to leave:
-“Thank you young lady. I hope to see you soon again.”
-“I .. I cannot wait” I replied with a croaked voice. 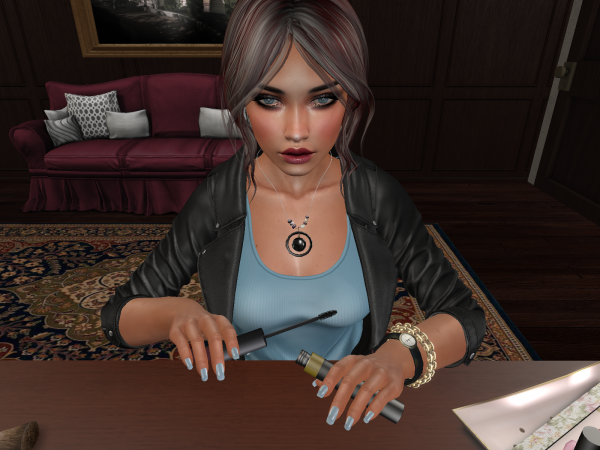 He chuckled and left finally letting me alone … and kinda messy. I put my panties back on and made my way to the toilets and finally to the changing room. I took time to fix my appearance and left the mansion, goose bumps still all over my skin. This is such a place … such a place.