I tested for you – The Maui Swingers Resort

This time I have tested for you a place that looks ideal to spend some time during the summer: Maui Swingers Resort. Well, as long as you have a swinger spirit, because this is what this place is about as the name states it. Of all sexy men of Second Life, you probably know the famous Larry Vinaver (if you want to know more about Larry, feel free to read his interview, he is quite a character). This is because Larry published a lot of pictures of the place that I decided I wanted to give it a go.

I had to face a first problem: the place is not public. You have to be invited by a member who sponsors you. From there, you can hopefully expect an invitation to an interview, when a senior member will assess your “compatibility” with the place. As far as I was concerned, Larry kindly accepted to be my sponsor and wrote a kind message to the admins. A few days later, I was invited for the interview by Alicia Flanagan, one of the persons in charge of assessing new people. Alicia asked if I would accept to get interviewed alongside another potential member and of course I said yes… the more we are the funniest it is as I use to say. I would not reveal his identity, as we did not actually discuss if he would be ok with it… You never know maybe the man has a girlfriend.

Alicia explained us in length the spirit of the place: Maui is not a club! Well it is actually, but before everything this is the private estate of Bandor and Dani Tyrell, the real owners of the place. They are of course swingers and promote this way of life on their estate. Having said that, you can imagine that they want to know who comes over to their place. Would not you do the same? Well, the place probably grew super fast because from my last check there was at least 2,000 members, which is quite amazing! Yes, this is a successful project and my guess is that this pre-interview and selection of the members has something to do with this.

Speaking about what is required:
– A sexy human avatar (mesh absolutely required, no beginners or free parts), well yes you are required to be hot!
– You must be at least one month old
– No means No! I like a lot this rule I have to say.
– All the rest of the rules are actually encouraging you to show off, flirt with your fellow members with respect, and let what must happen if you are so inclined… Simple and efficient.

So, after a relatively short interview, I was good to go and admitted to the sim. I think being introduced by Larry helped a lot in that matter. Alicia brought me and my fellow new member to the sim where she publicly announced we were new! This is when I saw the community of Maui in action: never I received such a warm welcome on a place I just arrived. That was absolutely amazing, my IMs were like a Christmas Tree, I did know how to deal with the numerous messages. Wow, a very first good impression.

Actually when you start at Maui, you are not yet a full member. You have to show the community you are worth to belong to the place. So I started, as everybody before me as a “guest”. What is cool is that everybody knows that you are new. That makes them more careful, they want to know you, and well the overall experience is better. I have heard a few say that a guest is a synonym of “fresh meat” but I never felt they were acting that way. It was more friendly. In order to progress into the community ranks, you need to get some reviews: if you succeed to get 4 positive reviews, then you become a full member, get the “swinger” title and you are entitled to ask the VIP group which allows to participate to some more private parties. 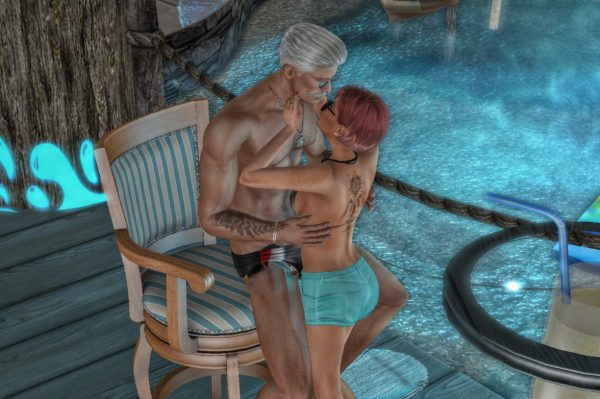 You can imagine that as soon as I was admitted I contacted Larry who came to welcome me in person. We had a long chat that afternoon and of course we flirted a little until he had to go, letting me to my discoveries of this new sim and its inhabitants. Most of the members of Maui are gathered at the beach club. This is where people meet and chat and when you feel something special with someone, you are often invited to move over to the beach (which is splendid) or the other areas of the gigantic sim. Of course, if you are bold enough you stay at the beach club and indulge in all sort of “fun”, this is allowed and encouraged … that’s a swinger place after all, you are not obliged to hide to have your fun.

So I spent an afternoon at Maui and I had a lot of fun … yes by fun I mean also sex … not only but sex is, as you know well now, a part of the fun things I like to do. A few hours later, my dear friend Larry was back. I was discussing with another old friend on the beach: Chase Stone (you can also read his interview if you want to know more of him). Of course I invited Larry to come over. Larry was stunned to discover I already got two reviews … in such a short time. I giggled and well I should have felt embarrassed but I was pretty proud instead.

This is when Larry and Chase started to have fun and were chatting together as if I was not here… was I really worth Maui? Should they give me the warm welcome package? At the beginning I did not know if they were kidding and making fun of me or if they were serious. I realized they were actually intending to do what they were talking about when Chase asked this:
-“Do you think you can cope with the both of us Cathy?”

I looked at him aghast. Larry was having his playful face too.
-“You bet I can!” I replied.

Seconds later, the sexy speedos of my two cute friends were at their feet and my bikini mysteriously disappeared, stolen my four very skilled hands. I was finding myself naked in the middle of two of the sexiest men of Second Life. I blinked, was it a fantasy dream? I realized soon it was not and that I had to keep to my promise to deal with the two of them … demanding guys but oh so sexy, oh so well hung! I felt like a goddess of sex surrounded by those two males, experts in the art of sex.

It all ended in powerful orgasms and cocks fireworks !! Gosh those two men were like sailors who came ashore after months at sea … never I had balls that full.

Well, I will not tell you more, because there is no point. If you want to get the full experience, you have to come here at Maui. And if you tell me when you arrive, I will be very pleased to give you the warmest welcome you ever had. I hope to see you soon there my dear readers … I met some of you already (big kiss Kevin!)

6 responses to “I tested for you – The Maui Swingers Resort”