Wanna have a fun night? Pick a black club

It is commonly admitted that white women are attracted by black men. It is not a generality of course, everybody is different and has the right to be, but in that matter I stand with the crowd: I admire the black men. What could be the reason? Nowadays, we tend to find an explanation for everything, so why not trying to unveil the truth about this irrepressible attraction?

I am not a psychologist nor a sexologist, I can only speak for myself and a little on the behalf of the women with whom I dared to talk about it. The first reason I see is quite obvious: the skin color. It is not because it is black actually, it is just because it is different from mine. Maybe I am more adventurous than the average, but experimenting something new or different has always an appeal on me. Then, there is the build: black’s musculature is more impressive, prominent muscles and an irresistible round ass are definitely a turn-on as far as I am concerned. Finally there is the legend, yes you know what I mean of course. They are known to be well hung, and from my little experience, it is true.

No surprise then, that there are a few clubs dedicated to this hot fantasy, the black clubs they call them in SecondLife. I am not sure they exist in the real life, I suspect they do, but I am glad they do in the virtual world… and this is to one of these clubs I was heading that night.

I wore a tight and short black dress and high heels. My makeup was showy but elegant. The competition was usually very hard in these places and so I knew I had better to “shine”. I did a last check in front of the mirror and smiled, satisfied with what I saw … it was time to seduce! I ordered a taxi and arrived half an hour later in front of the club.
-“Have a good evening young lady!” said the taxi driver with a wink as I was paying him.

I ignored his allusion and made my way inside the club. It was still pretty early, on purpose actually as I have never been a big fan of crowded places. I went on a tour and checked the different rooms. I felt the glances of the people on me as I was touring … the heavy stares of the men and the suspicious ones of the women. I decided to go the bathroom to check on my make-up. I was about to push the door of the ladies when it swung open … A very seductive black man, followed by a dishevelled giggling girl, passed me. I had no doubt on the activity which took place here just when I arrived. I smiled to myself and fixed my makeup, at least I knew what could be expected of the place. 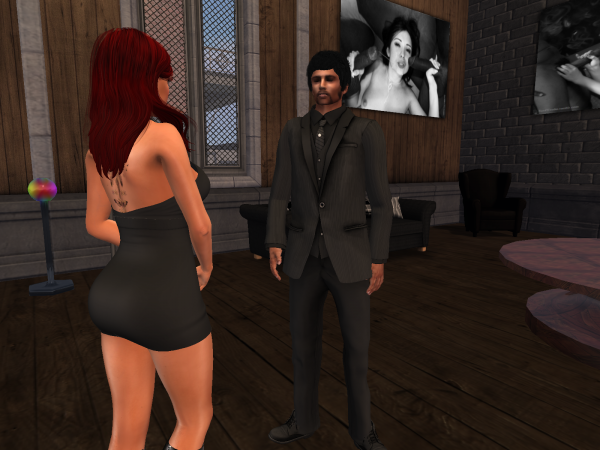 I was on my way to one of the rooms where I spotted earlier a little crowd and potential “prospects”, when I felt a touch on my shoulder. I turned around to face a tall and elegant black.
-“Hey sweetie! How are you?” he said with an amused smile.
-“Hello! Good, very good actually” I replied in a joyful tone. I briefly checked on him and well … he was my type. It did not take long I thought.
-“First time here? I never saw you before … I would remember.” he said flattering me.
-“Ahem … yes, I am Catherine by the way”
-“Driss” he replied.

He smiled and checked on me, slowly, without any sort of shame. I arched an eyebrow a bit surprised and amused by his rough behavior. His stare finally came back to meet mine.
-“A cutie with style, I like that!” he finally said appreciatively. “As you are new here, let me give you some advice.”

I nodded and smiled seductively.
-“I am all ears”

He chuckled.
-“Ok, you’re by far overdressed” he simply said.
-“Am I?” I asked with an amused tone … it was actually starting to be interesting.

Just at this moment a girl who probably just arrived in the club entered in the room we were in, and passed us walking in the direction of the bar. I looked at her aghast and she looked back at me with a smile. She was wearing a completely transparent dress with only a little black thong underneath.
-“See?” the man said with an amused smile. He stepped forward and looked at my daring cleavage. “You’re showing some skin … but what we are used to see is this!” Without any warning he put aside both sides of the top of my dress, putting my boobs on display. I gasped and covered myself laughing more in shock than really amused. “No bra? It’s a good start” he said. “Come on, arms aside, I am sure your breasts are splendid. I tilted my head and half smiled, slowly letting my arms going down along my torso.
-“Like what you see?” I said after a few seconds of him drooling. 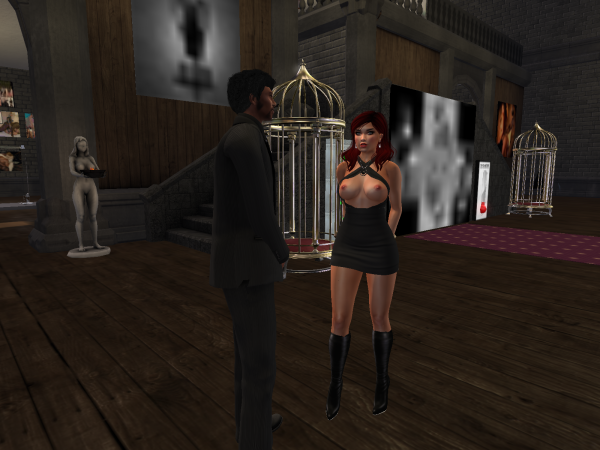 He stared back at me and smiled. He stepped forward again and taking me again by surprise he hiked up the hem of my skirt, flashing my bare bottom to the room. I heard cat-whistling behind me and applause but I did not dare to look back.
-“And no panties either!” he commented. “You’re a surprising young lady.”
-“Well I did not come completely unprepared” I replied with a smirk. “I know why I am here and what I want.” 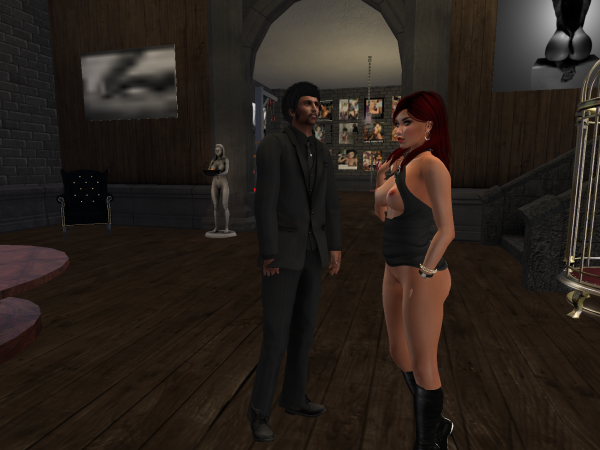 He chuckled.
-“I see!” he said. “He grabbed my hand and led me to one corner of the room, the corner at the opposite of where the bar is actually. There was a comfy armchair in which he sat. He looked up at me, I was still standing in front of him. “You made me … very ….tensed” he said touching his crotch with his right hand. “I am sure you could do something about it, couldn’t you?” he asked with a smirk and spreading his thigh open. 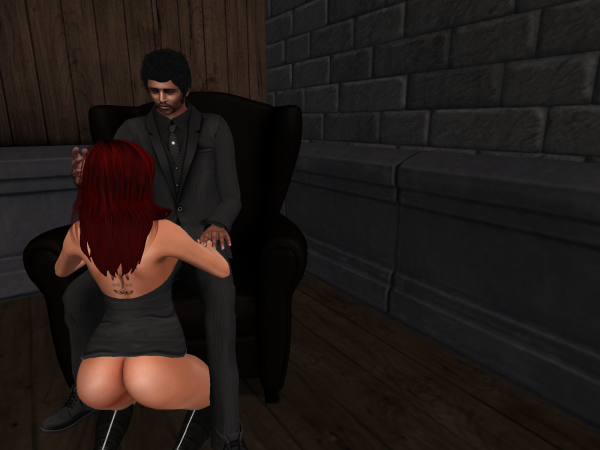 -“Let’s see what I can do!” I replied, kneeling between his feet. He chuckled as some of his friends, probably, cat-whistled again. I opened the zipper of his pants and with agility made his already hard cock out.
-“Like what you see?” he said mocking my earlier question. 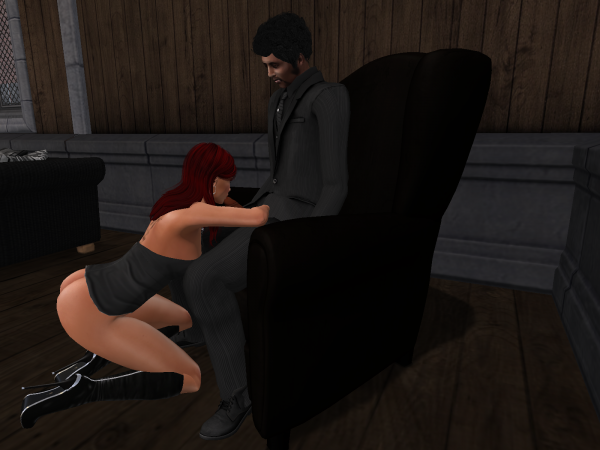 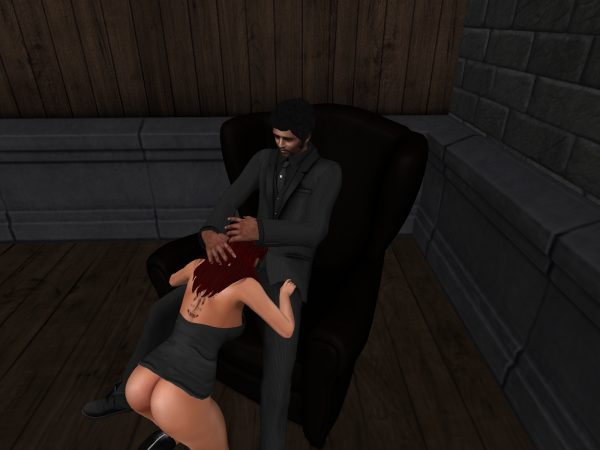 He made me on all fours and gently moved my knees apart. I was probably quite a show for him at this stage. I felt his hand going between my legs, a finger following the slit until it made its way in. I gasped, he chuckled.
-“I think you are going to enjoy this!” Soon after I felt the warm and firm head of his cock pushing in and I could not prevent a brief moan. 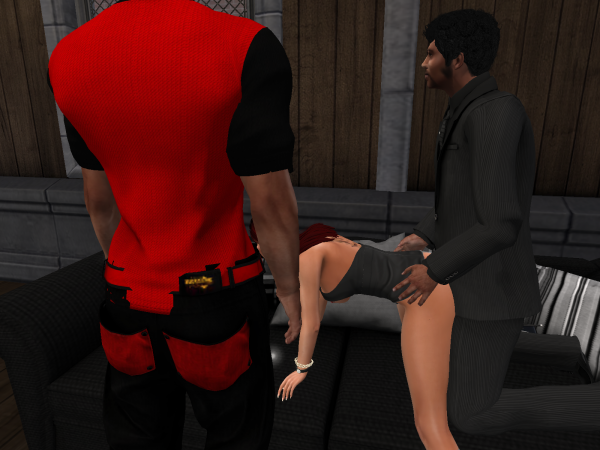 I was so much in it that I did not notice a guy standing next to us. Both men shook hands and started to chat. I was amazed, they were chatting to each others while one of them was fucking me, slowly at that moment but still, I felt his large cock going back and forth. They seemed friends, or acquaintances at least from what they said.
-“Wanna share this one with me?” Driss finally asked him. “I am sure she won’t complain, will you sweety?” he asked me with a strong slap on my ass.

I moaned and looked back at him with a mocked frown.
-“I would certainly … enjoy your friend too” I said finally smiling.

They both laughed and his friend positioned himself in front of me. He flew open his zipper and presented me his cock to suck which I eagerly take in. 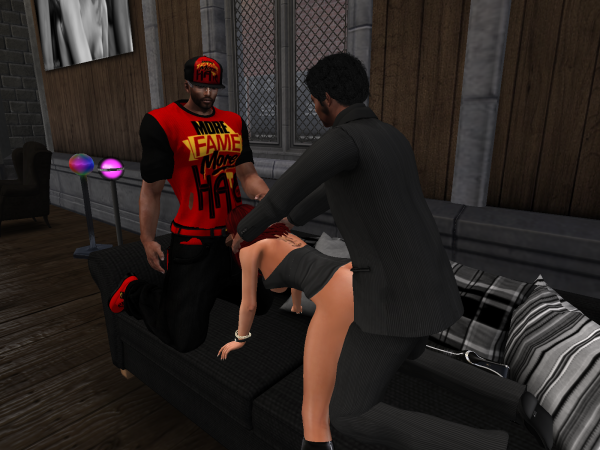 -“Isn’t she a good sucker?” Driss said. The other guy only replied with a satisfied groan. I got another severe slap on the bum and Driss started to pound me more heavily and I started to feel strongly aroused.

The club started to fill in, more and more people were arriving. The scene we were showing did not seem to shock them particularly, and actually I was able to spot two other couples in action in the nearby corners, a bit less exposed than us however.

I was now seriously pounded, having some difficulties to suck my second partner properly. I suddenly reach climax and bit my lower lip to avoid screaming in ecstasy. Driss’ friend took the opportunity to undress fully and when I re-opened my eyes I was able to admire his nice build … his muscles and his fully erected cock in front of me. 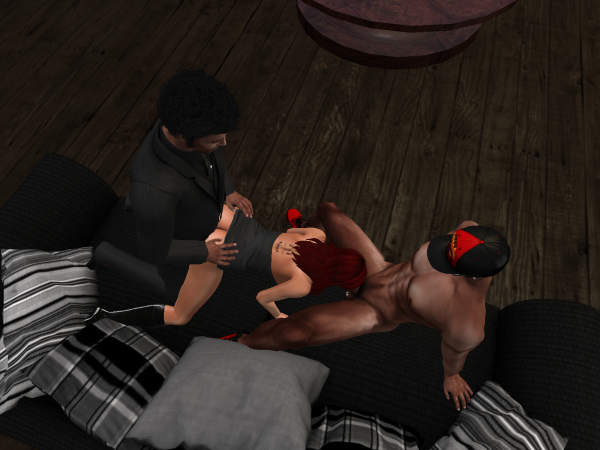 He sat naked and I took him back in my mouth, this time giving him the proper attention. He then slid below me, and I did not understand how they managed but soon after I felt in my vagina the two cocks of my lovers. I was having one of the most intense sex in my life. One of the two men, reached his climax and triggered the other … and I had soon two vibrating cocks and moaning men surrounding me, such a unique feeling. 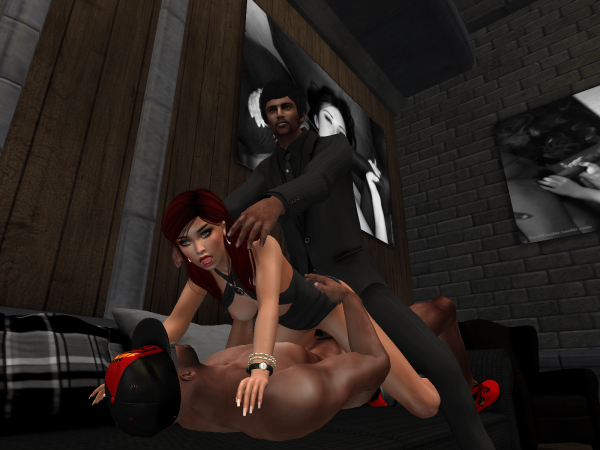 Driss friend finally stood and dressed back. He planted a kiss on my cheek.
-“Thank you!” he said simply with a smile and he left to the bar.

I sat on the sofa, and started to re-adjust my dress. Driss looked at me, arched eyebrows and shook his head.
-“Ho no no no. We are not done yet! Let me ten minutes to recover.”

Having said that he exposed me again and took me in his arms, caressing my breast and the inner of my thighs. His friend came back, carrying two glasses. He gave me one and the other to Driss … and he left us saying he had another hottie to meet. I shook my head falsely shocked.
-“It’s always like this here?” I asked.
-“Always!” he said with a smile. “I hope you enjoy yourself sweetie.”
-“I do actually!” I chuckled. 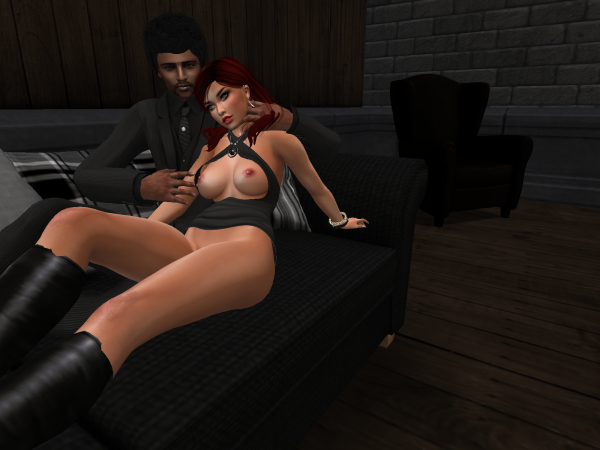 Once I finished my glass, he helped me laying on my back. He eased himself in my mouth and I helped him regain some vigour, which did not last very long. After some time it was more, him, mouth fucking me … something I had never experienced at this level before, and that I found truly arousing. 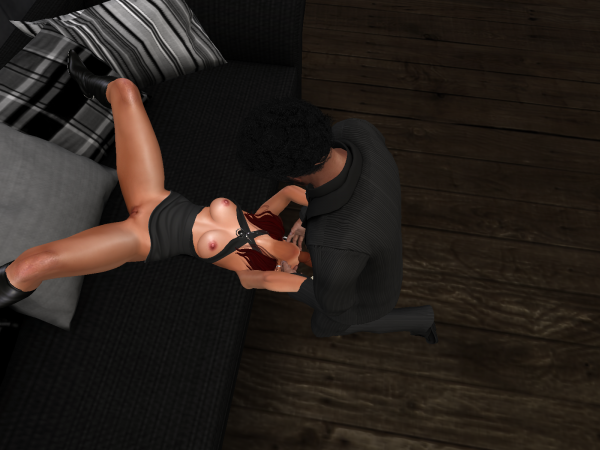 We had another intense sex session until we both reach our intimate pleasure. 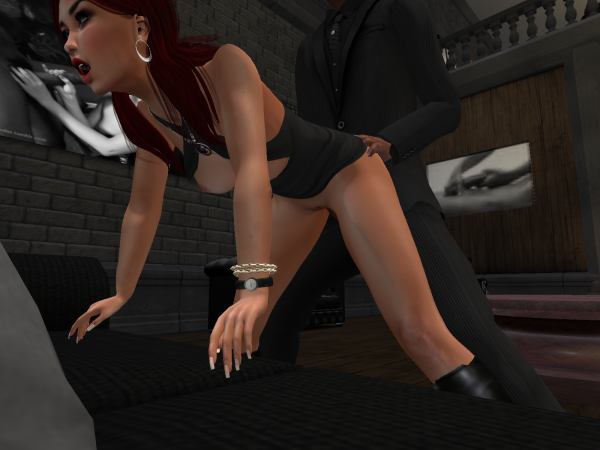 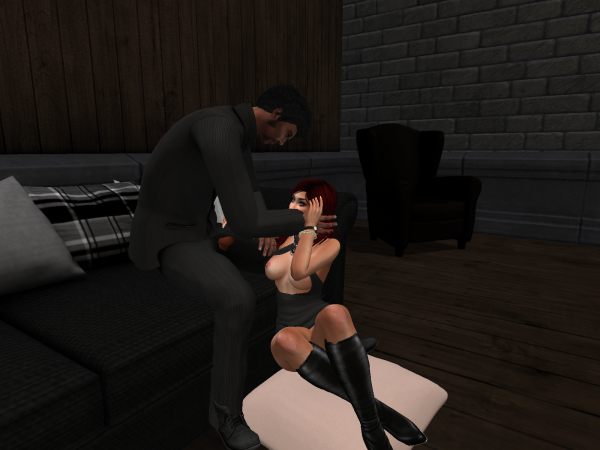 Once we had recovered, he offered me a drink at the bar and introduced me to a few of his friends, all men. We chit chat for some time and I was starting to get a bit too drunk so I told them so I was about to go. Driss tried to make me stay but he understood my decision was taken. He accompanied me up to the door of the club and handed me a pen:
-“Write your number here!” he said giving me the inside of his arm. I smiled and wrote my number and draw a little heart. He smiled.

He hiked up my dress to the waist. I gasped as I saw the amused and interested look of the people around us as I stood bottomless in front of them. I felt the pen drawing characters on my butt. He put the dress back in place and gave me a firm spank.
-“Call me soon” he said with a wave.

I left the club and took a taxi back home. This is only when I came back home that I could read what he wrote on my bum.
It read “Call me soon slut!” followed by his number.

I was soon asleep, maybe replaying the scene in my naughty dreams.