Snuff fantasy in SecondLife: one step too far?

What is snuff exactly?

According to Wikipedia: A snuff film, or snuff movie, is “a movie in a purported genre of movies in which a person is actually murdered or commits suicide”.
In SecondLife, those films might exist, however, this is not only a cinematographic experience that snuff lovers are looking for. Snuff activities in SecondLife seem to evolve around role play scenes in which typically we have an executioner and a victim. The outcome of this encounter is quite obvious.

However you can find some similar practices, like the usage of restraints and various crosses, the whipping and all this lot of punishments. In snuff this is more extreme though.

What are snuff lovers looking for?
The way I felt it, before investigating more in details, is that snuff lovers were in for sensations. Actually it can be different from one person to another and there are different trends: noose lovers, cannibals, torture, and many others.

A first experience
I started my investigation in a location nearby the office of SLA Media. To be very honest, it turned me off. The place was at the same time crowded and desert: it was full of corpses. I mean there were actual avatars, but they were roleplaying, if we can say that, a dead person … Nobody to talk to in a museum of the atrocities is not something that is easy to handle even in a virtual world. 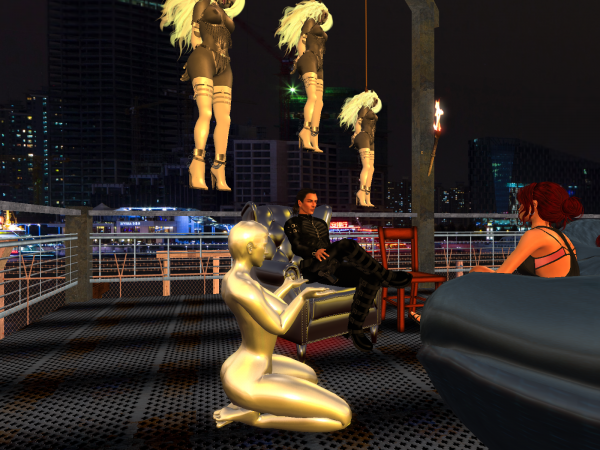 Once the emotion has passed, I needed to understand a bit more of this “phenomenon” and I started to research places treating of “snuff”. This is how I found “Gharlane’s correctional facility”, the property of Gharlane Cheviot, a must-see place in that kind of business. You could expect, of that kind of man, a brutal personality. Surprisingly, Gharlane is quite the opposite in fact. He has manners and is very keen to expose his vision of the things. He saw me in the main hall of the facility. To reach him I had to cross a short bridge, on my left and on my right were hung girls: the last victims of the sim. He was sitting in a comfy armchair just under gallows, and was displaying a contented smile. He gestured me towards a chair facing him, I set myself in and we started to discuss. I was not at ease at the beginning, this kind of environment is so unsettling, so brutal … and it has been hard not to think I could be the next victim. His warm personality and charm, yes I can say that, put me more and more at ease and I was finally able to ask my questions more freely, not feeling fear anymore.

“I created Gharlanes Correctional Facility because of my own fetish for nooses, not for dead, even if that is possible here. Bondage, abuse and noose play are my fetishes and so I created this place for two purposes: first, to play from time to time with a girl, that shares my desires. Second, to get to know people with similar desires, maybe also for real. However I have no strict rules on my sim, so everybody can play whatever is possible here: a love hanging, juridical punishment after severe torture and long term imprisonment … Whatever you want and whatever the story behind the roleplay is.”

“That is not that easy to answer. I try. It is a fact, that more females feel the addiction to be a submissive girl. I assume it is a consequence of evolution. Women are as tough and strong as man, but over the centuries they have been oppressed in more or less subtle ways. Now we live in a time where that begins to change and I think, that a lot of women appreciate that – and also miss a bit the times they have been out of responsibilities. So they look for the one who they can trust and to this man they get the braveness to become weak. Moreover the submissive part is pretty much often the strongest part, because it needs a lot of self-confidence and self-consciousness to allow anybody else to control yourself. The submissive makes the rules and the limits – not the dom. That is how it works in rl – and so it is here,  more or less.”

Now I wanted to understand more in details the kind of “treatment” we can get in this kind of sim, and in this one in particular. The interesting part is why people do enjoy this fantasy as you could imagine how unpleasant this would be to endure that in real.

“I have a lot of torture devices for whippings, abuse, public disgrace, public abuse and so on. Also I have a lot of cells to store the slaves or inmates and finally – as you already realized – I have a lot of execution devices. My favourites are gallows, garrote and cross. There also is burning at the stake and beheading and shooting. To be honest I have no clue, why the much people are addicted to death play. I only have an idea about myself. For me it´s not the death. Even if I could I never would to kill anybody. But if I have a girl, that shares my desire it causes a real tension and excitement, if I slowly undress her, use hell of ropes to bind her. If I put the noose around her throat which – for me – is highly erotic. If I start to strangle her slowly (and carefully), to lick her and finally take her, while she is half hanged and I feel her arousal and her reaction – that´s great. The air reduction intesifies her sensations. The trust is more sexy, than anything else.”

I did not get a general explanation here but more his personal feeling. I more and more think there is no real general explanation and that it is all about personal experience and fantasy. That means, I will have to interview a lot of people to attempt to get the full picture. But what about Linden in all that, are they aware, do they tolerate this kind of things, here is what Gharlane has to say about it.

“Linden knows of course. Actually it´s only simply a sexual technique. Moreover there are more sims that deal with BDSM also in extreme ways: rude rape areas and so on. There are a lot of people who like to be taken against there will – that´s not my personal style, I prefer to act consensual. Even if it is a consent too to go on such a sim to get raped. But for those who have one of these fetishes, SL is a way to live it – especially if people do not dare to live it in real live – or cannot. Maybe there are exceptions – because of abuse of the capabilities of RLV. Usually it is always is consensual – in various ways. In SL it is impossible to really rape or enslave as in the real world – because everybody simply can log off. However there are some ways to get maximum control- but a master or dom never can force his “victim” to stay online. There always is one danger: some people begin to take this as the first life – not the second and loose contact to the real world. But only a few hopefully.”

So he admitted a danger exists actually and fragile people can be involved more than they would like to, or more than they should. However as Gharlane said, due to the fact we can log off anytime, the game is by design consensual, so … is it a step too far or just an extreme game between adults?

Snuff lovers seem to be of very different kind. It is not one world but a variety of different extreme games between adults who we expect are conscious of what they do and know their limits very well. I definitely think that it might have some psychological impact, but this is the case with BDSM already. Snuff is going further and definitely it will put off a lot of people. I was definitely surprised by Gharlane personality, kind and polite, still managing a very violent sim. I do not think we can understand it without getting involved into it, it is too far from normal life or even normal fantasies. Gharlane actually suggested that I could witness a game, or even participate in it. I did not take any decision yet, but he also gave a list of numerous sims to visit, so I think I am going to visit more and make an opinion.

Time to debate. What you guys think about it? I would really like to get your opinion and that we build a true debate about extreme games in SL. Do you think it is going too far? Do you think Linden should step-in? On the contrary, do you think it is freedom and it is better people play those games virtually rather than in real life?
Looking eagerly for your thoughts.

13 responses to “Snuff fantasy in SecondLife: one step too far?”