I am not sure if you remember, but when I did the see-through pantyhose dare, I got arrested … I pushed my luck a bit too far!  I did the dare at Castle Rock, a sim that evolves mainly around its penitentiary: the town around is just a playground to do mischief which actually leads to your arrest. That is exactly what happened to me … well to be honest I was actually looking for an experience in a Second Life version of “Orange is the new black”.

-“Raise your hands! Don’t move! You’re under arrest Miss!” said the female voice behind me.

My clothes and hair were dripping wet after my fall in the water. I was shaking because I was very cold but also because I was panic-stricken. I raised my hands above my head and risked a look back. A lady officer was pointing a gun at me. She approached slowly with suspicion. She grabbed both my wrists and placed my hands behind my back, I was petrified with fear. 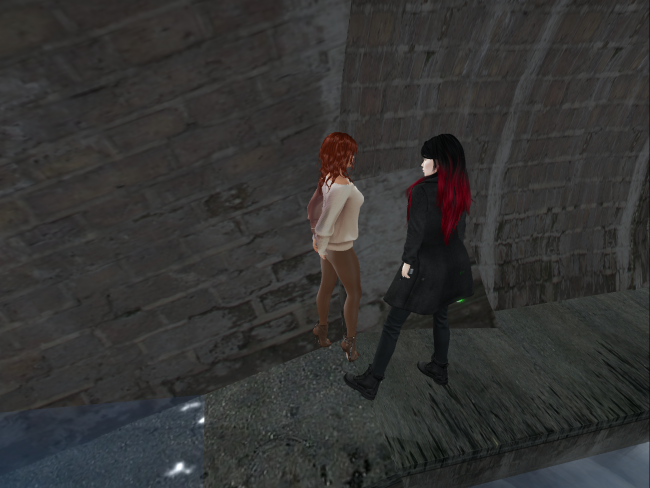 -“Don’t you dare move!” she said quite aggressively while securing my hands in cold steel handcuffs. She finally holstered back her gun and grabbed me by my shoulders to make me face her. “All right, I am going to charge you with trespassing in a restricted area, and … exhibitionism” she added staring straight at my exposed crotch … with my hands behind my back, I could not rescue my modesty by pulling down the hem of my jumper.

-“I …” I tried to protest my innocence but she cut me off.

I was terrified and slowly nodded.

-“Good!” she said looking satisfied. “Let’s go and find you a nice little cell while you wait for your trial” she added.

She pushed me hard in the back and ordered me to walk in front of her. I was walking slowly, fearing to fall again in the water, and with the cuffs on, this could be fatal. We eventually arrived near at a locked metal door on the side of the tunnel, one I passed earlier without noticing it. The officer grabbed an impressive bunch of keys from her belt and opened the door. She pushed me through, followed me in, and locked the door behind her. We were now in a sort of parallel tunnel, but this one was clean and dry. We took multiple turns as she opened more secured doors on the way, I was completely lost in which directions we were headed but I guessed we were walking towards the prison.

I was finally proved right when we arrived in a large room with a big sign on the door reading “Castle Rock Department of Corrections”. I was now really worried about my fate. I knew that I deserved a punishment, but the offences were minor … surely a call to my attorney would solve the issue and I would go out with a severe fine … not too severe I hoped. 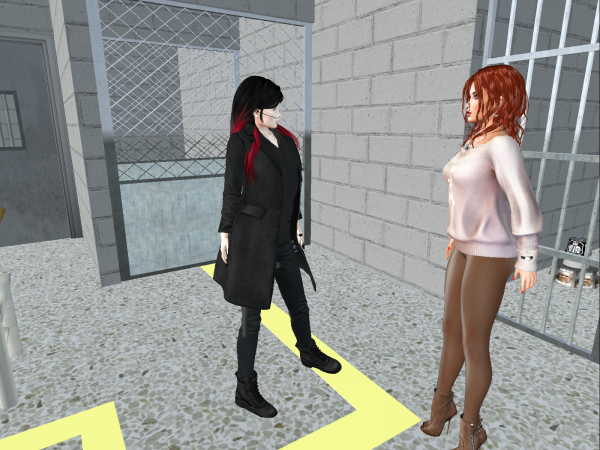 The officer looked at me with a hostile stare.

-“All right! We are going to proceed with your admission. Strip off these damp clothes please, I will provide you with dry ones, more appropriate for your stay with us.” she chuckled.

As I was a bit too slow for her liking, she started to yell at me, which added to my discomfort and fear. 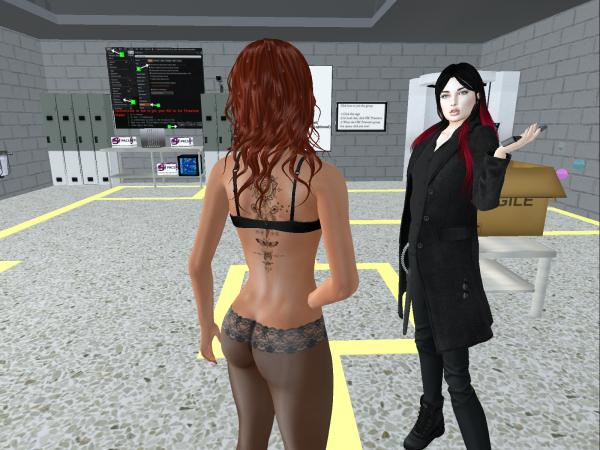 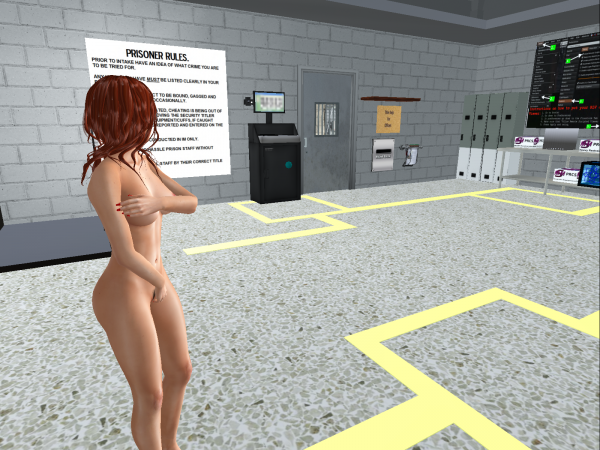 -“Quick! I don’t have all day.”  I finished stripping naked and she brought a box. “Put your clothes in!” I dropped all my belongings, including jewelry, into the large box and looked at them wondering when I would get to fetch them. The prison seemed pretty strict and severe, things could turn quite bad in this kind of place. “Good!” she finally said. “Now move to the wall there!” she ordered.

She followed me and made me face her. She put on latex gloves and I knew instantly “a cavity search” was in store for me”. In what mess did I put myself into?

-“Open your mouth wide Bitch! And no biting or you will regret it!” she said while switching on a flashlight and directing it in my mouth. She took her time to inspect every corner of my mouth. Finally satisfied she stared at me with a devilish look. “Ok, turn around, hands on the wall where the marks are, feet on the marks as well, and stick that butt in the air darling! The easier the access for me, the best for you. Understood?” 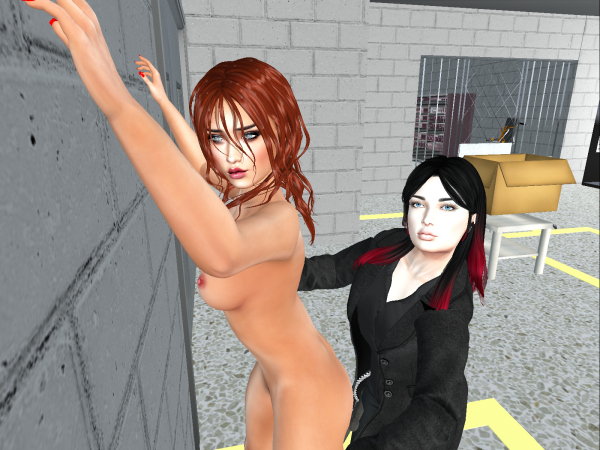 I nodded and took the shameful position. I felt so humiliated at that moment, she was treating me like the worst kind of criminal. She crouched behind me and mercilessly invaded my “cavities”, she had the kindness to use some lube, but still it was pretty painful. I could not prevent myself from gasping which definitely seemed to annoy her, she was such a brute! She removed the gloves and threw them in a bin along the wall.

-“It seems you’re not hiding anything.” she said. She then grabbed a small white pot from the nearby table and handed it to me. “Pee into this now, we need to conduct a few tests. I hope you did not use any drugs recently.” She chuckled and pointed at the chamber pot in the corner. “Crouch over it and don’t you dare to pee on the clean floor.” I took the little white pee pot, crouched over the chamber pot and concentrated. 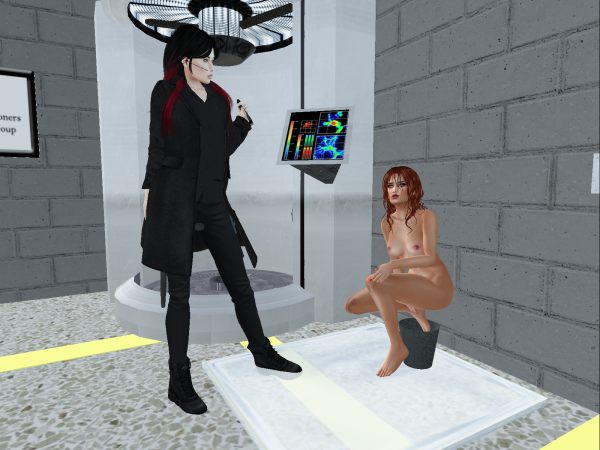 The officer was looking at me, arms crossed on her chest.

-“I can’t do it if you look at me” I said plaintively.

-“Better to hurry girl! Or things will go a lot worse for you” she said with an angry look.

I closed my eyes and finally succeeded without making a mess. I raised up and handed it over to her. She put a cap on it and let it on the table

-“Good girl! Now time for a shower. Get into the booth! Quick!” she ordered.

I stepped into the booth and she came in after me, securing both my ankles and wrists to strange ties. Satisfied she went out and closed the doors and finally went to a control console. I never saw such an “advanced” shower before. She pressed a few buttons and the ties tightened and pulled on my limbs until I was in a very uncomfortable cross position. 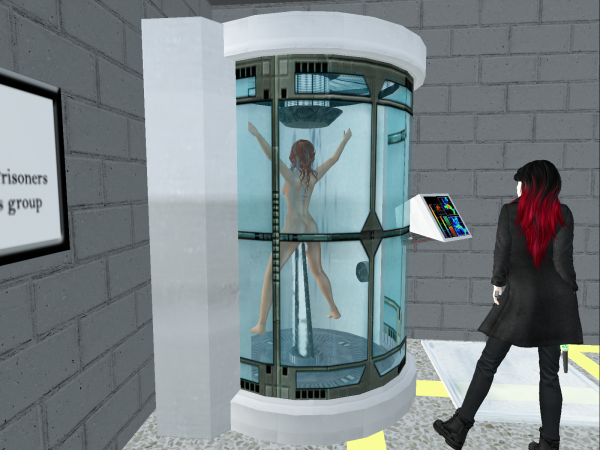 -“Don’t panic dear! You are about to have a very good wash.” she said with a sadistic smile. Now that she said that I was indeed in a total panic. She pressed again a few buttons and some high-pressure hoses went into action. The pressure was nearly unbearable and some of the hoses were directly directed to my orifices to allow a “perfect” cleansing, not my words, hers! I yelled and protested, I am not sure if it caused her to stop, or if, on the contrary it made her prolong the torture, but she eventually switched it off and came to untie me. I was in shock, all my body shivering.

-“Yes!! Now you are a clean girl!” she said mocking me. She then led me to a table where some boxes were piled up. She opened a few of them and grabbed a uniform, some undies and slippers for me. “This should be your size!” she said. “Do not lose anything, we will not replace them … and do your laundry regularly. Understood?” 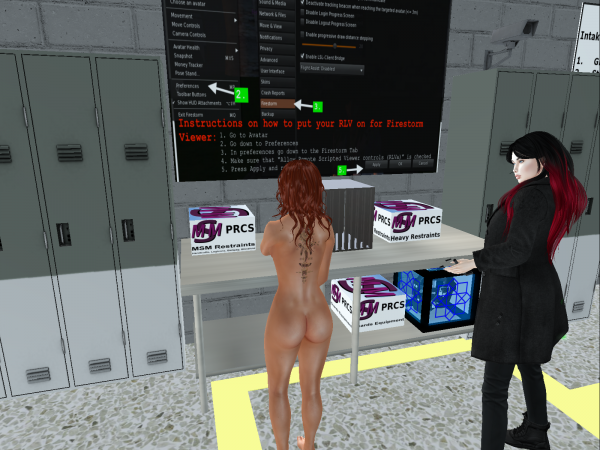 -“Yes … yes” I stammered. She smiled with satisfaction.

We finally went to the machine that took my fingerprints. Then she made me pose for the admission photograph. I felt so ashamed, so humiliated… How did I let myself falling so low. I had been really crazy and stupid, and the prison seemed so harsh. 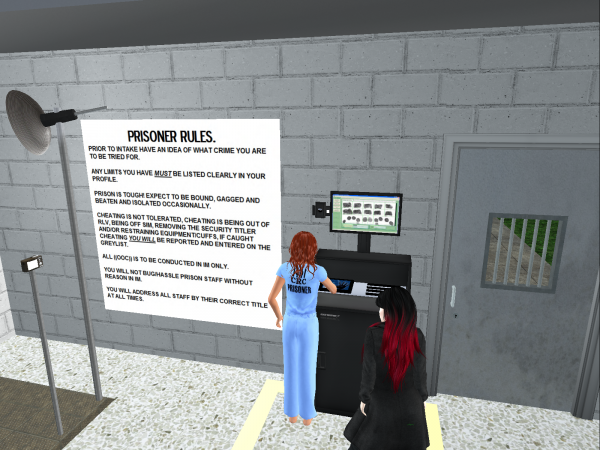 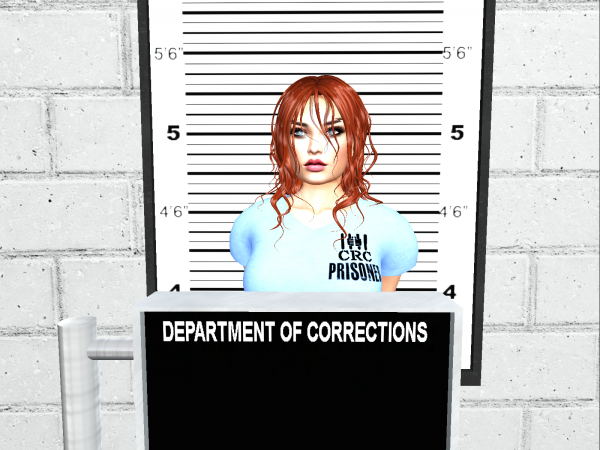 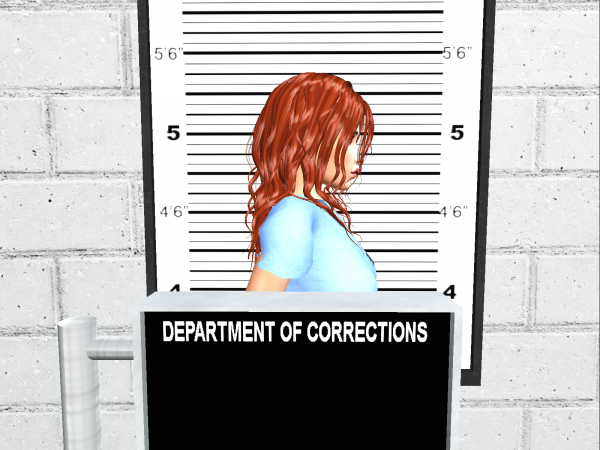 Once the procedure was finally completed, she handcuffed me and led me to the main building where the cells were. It was very impressive, the cells were on three levels. Everything was depressing about that building: the bars, the grey cement, the stressful echo of the inmates yelling. I hated the place the second I walked in. I was assigned a cell and was informed that I had a cell mate … the girl was out when I was led there so I had not the opportunity to meet her. I hoped she was not a murderer or a violent person, I would not be able to sleep one second if that was the case … and eventually I would die of exhaustion. 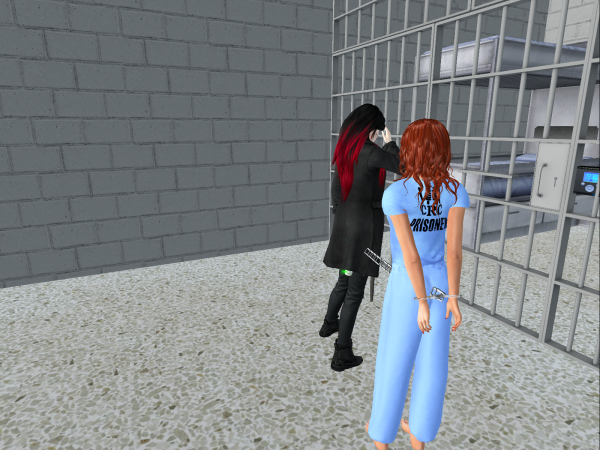 -“Your trial will occur in three days.” the officer told me in a cold voice.

-“Three days? I will not … I will not survive here.” I said desperately feeling tears wetting my eyes.

-“You will have to princess!” she chuckled.

-“Please I want to talk to my attorney now, these are my rights.” I told her trying to reassure myself that he would be able to get me out before nighttime.

-“Nah it’s too late now dear. No phone calls allowed at this time … you can call your attorney tomorrow.” she said authoritatively.

-“There is no but … challenge me again and I’ll put you in confinement” she threatened.

I gulped and remained silent … She was definitely no one to mess with apparently. She finally took off the handcuffs and grabbed my arm.

-“Time for you to see your mates!” she said leading me to the main courtyard where a few girls were gathered.

I was aghast when I saw a full row of pillories … those barbarians were using them to punish the inmates, where on earth am I? I wondered. She pulled me towards one of the pillories, where a girl was restrained. She approached the girl and slapped her face, for no reason but sadistic pleasure. 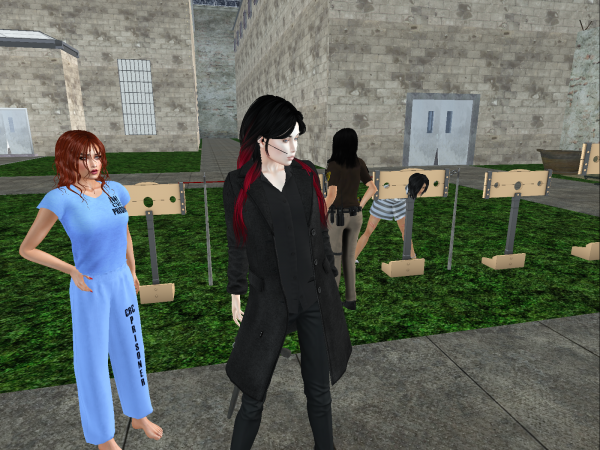 -“Meet your cellmate Catherine!” said the officer. “I hope you will behave better than her … I am afraid otherwise you will be in the same predicament.”

I looked on, terrified, at the poor inmate who seemed to suffer from her very uncomfortable position. I gulped, feeling so bad, so low in mood. I guessed this was the effect the guards were expecting … subjugate the inmates and you have peace.

The talkie of the officer crackled … she walked away and snapped orders that I could not hear … at least it made her leave. I looked on in pity at the poor girl in her pillory. She looked up at me.

-“I am … I am thirsty” she said in a tired and rasping voice.

-“In the canteen … on your right in the main building” she said in the same terrified voice. 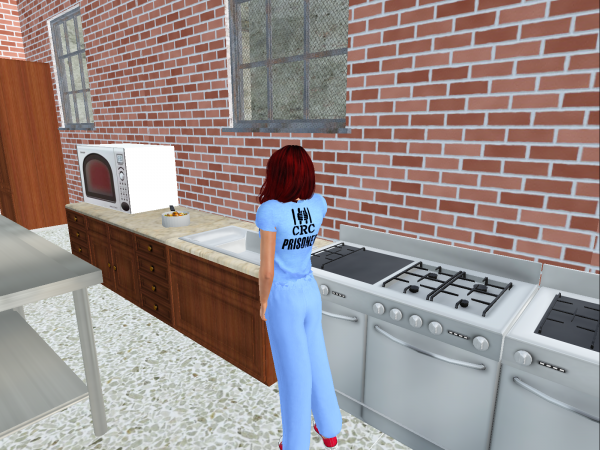 I ran and found the deserted canteen. I looked in the cupboards and finally found the glasses. As quickly as I could manage I returned to the pillory and let her drink. I never saw such a look of gratitude.

-“Thank you very much” she finally managed to say. “I am Jenny!”

-“Take the glass back to the kitchen … they will use any excuse to punish you” she advised. “Go to the cell and keep a low profile.” She paused then said “just the advice of an experienced inmate.” Her voice was more clear now.

I nodded and did as I was told. I finally entered into my cell and laid down on my bed. I did not sleep for hours, thinking about how stupid I had been … and I cried a lot too, one of the worst night of my life. 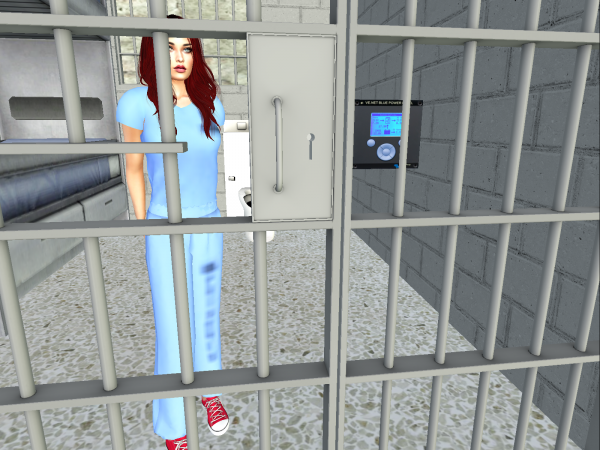 TO BE CONTINUED in chapter 2.