So it happened! Despite the very short notice, the party encountered a frank success which was a bit unexpected to be honest. I thought it would only be me, Silky and Mia, but to my surprise it was a bit more crowded than that. We were not millions though, our parties do not encounter such a success yet, but I said “yet”, so maybe one day we will smile thinking of our single dozen gatherings.

The party started as usual: Silky, Mia and I arriving roughly 10 minutes before the party launch for the last minutes settings. I think Silky had the best outfit for our theme “neon”, which was only an excuse to wear 80’s style clothes and listen to new wave hits. After a little chat, we warmed up (actually loaded our dances HUD) and finally Silky released her music, the party was on. I quickly transferred the VIP invite to my friends as they can reach our secret location … Finally the party was on and I was once again surprised by the overall joy and friendliness floating around me: I was all smile. I definitely adore those moments we share with people all over the world in SecondLife: Mankind can be good sometimes!

About the sim, it is just impossible to describe, the best words I could find is “sci-fi void” … you know what, the best is for you to check by yourself, this is simply amazing: Torley’s sim. Bon voyage!! Keep in mind that we were only occupying a single corner of the sim, there is much more to see. I have never seen something like that before honestly.

People arrived and when Silky’s estimated we were enough in, she winked at me … I knew what it meant, the daring part was about to start and I have been chosen to trigger it … not that I am complaining, actually it was exciting to be the first starting to peel clothes!

It did not take time for the happy crowd to follow and clothes were thrown away at every corners, I was just exhilarated, laughing like crazy or drunk. Once again we were crashing a fantastic sim, deserted by the inhabitants of Secondlife, but giving it back a life … those sims deserve to be enjoyed and this is exactly what we were doing. In the buff, this is right, but to me, it adds to the fun.

Once all clothes, or nearly all of them were spread on the floor, it was time for me to become the little pyromaniac of the party (as Silky likes to call me). I opened my little box and tried, using my old stuff and the help of Blue (the lady in red), to put literally the sim on fire … everybody then started to fetch their own stuff, and the dark room was now filled with rainbow balls and effects … I felt it was kinda artistic, though it made things a bit laggy.

All good things have an end … it was pretty late for me, as for many of the party goers but I did not see the time passing. Thanks to all we dared to come to this once again crazy gathering, this flashing mob as I use to say! A big thank you to Silky, who organized everything, the place, the music, the flyers and the overall communication around the event! You have been fantastic dear. By the way, if you want to read her report, follow the link: Silky’s report. 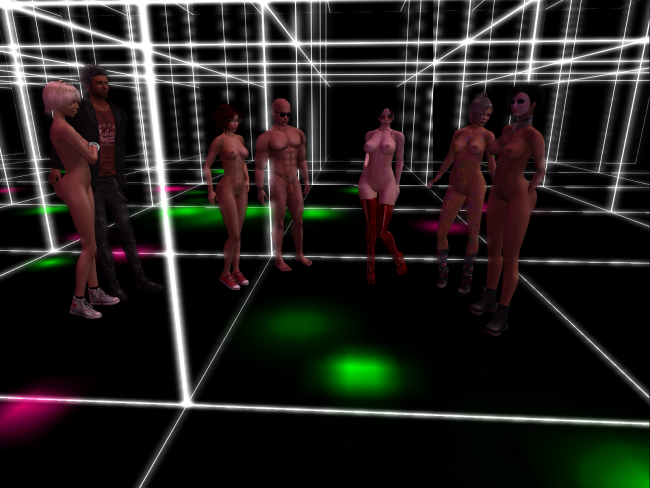 Bye bye all and I hope to see you very soon!!