Another story of my whoring adventures, a silent encounter

That night, some time ago, I got hired by a new customer. I did not know then, I was in for a little surprise. Actually I like it, getting surprised, so I am not going to complain about it, it is what makes my job interesting.

The address I was given, was in one of the wealthiest area of the town. This is the kind of place I would never be able to afford for myself. At least, I would enjoy it tonight. I arrived at the doorstep of a luxurious apartment building and pressed the bell of the number 24. I heard the typical noise of an intercom being picked up.

-“Hi! I am Catherine, you booked my … my services tonight” I said in a joyful tone to try to hide my apprehensiveness.

No answer came. The person on the other end simply hung up. A few seconds later the front door of the building was unlocked and I was finally able to enter in the main hall. I figured out that flat 24 was probably on the second floor and called the elevator. I was a bit nervous but I tried to reason myself while the lift was taking me to the second floor: I took all the usual precautions I thought. One of my colleague was aware of where I was, and I was supposed to call her in maximum two hours.

I was finally in front of the door of the flat 24 and pressed the bell. The door opened and I faced a very tall guy with long dark hair. He did not smile or had any facial expression when he saw me. Honestly, he was quite impressive, the perfect illustration of the villain of whatever action movie. He was an American Indian type, elegantly dressed, shining shoes, definitely I was able to see he took great care of himself.

He gestured me in and closed the door behind me, letting me standing in a very large room while he went to a chest of drawers nearby, from which he fetched  a wad of banknotes that he handed to me still without a word. 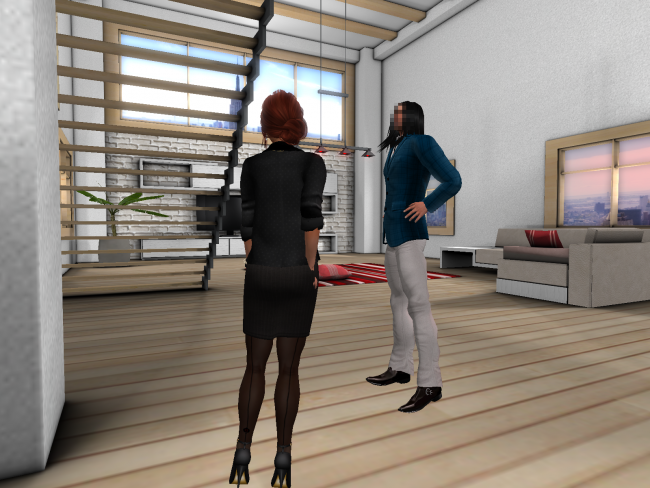 -“Thank you!” I said counting the notes before putting them in my handbag.

Still no answer: he stood in front of me and took his time looking me up and down. He scrutinised me very slowly, very accurately, I could nearly feel the touch of his stare on my skin. I felt quite uncomfortable. I probably passed the test since he started then to walk in circle around me, just like a shark would do around a sinking ship. It felt very strange and I think I was even more ill at ease because of his consistent silence.

Finally he took my hand and led me to the large sofa. He made me sit while he went to fetch a tray on which were two glasses and a very expensive bottle of champagne. He poured the wine into my glass, then in his and he finally sat besides me as we clinked the crystal glasses with elegance. Still no words. I was unable to say either he was actually dumb or if it was part of his game … maybe he was shy to let people hear his voice, who knows? We took our time to drink two glasses during which he continued to detail me. Judging from his pants, he seemed to enjoy it. 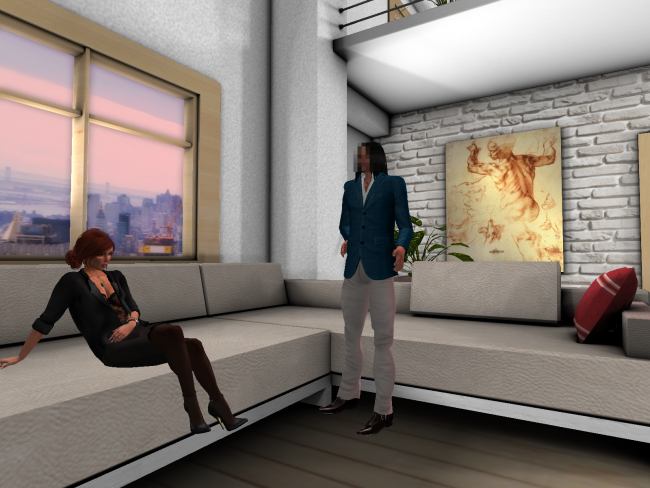 He finally put his glass on the tray, stood and helped me to stand as well. Probably it was time for us to go into more serious “business”. He led the way to the mezzanine floor where he had his bedroom. Here again he spent long minutes observing me standing in front of him, as if he was looking for inspiration. I kept smiling all the time, I was in fact quite intrigued by the manners of the guy. Silence was still the rule in the bedroom apparently so I continued to comply with it.

He finally made a move and approached to help me out of my vest. He stepped back and I understood he wanted me to continue while he watched. Everything was more subtle in silence, you have to rely on signs or gestures. It was quite interesting actually. I was more in my area of expertise and I started to strip with as much seduction as possible and for the first time since I met the guy, I could see the beginning of a smile on his face. I was probably doing well. 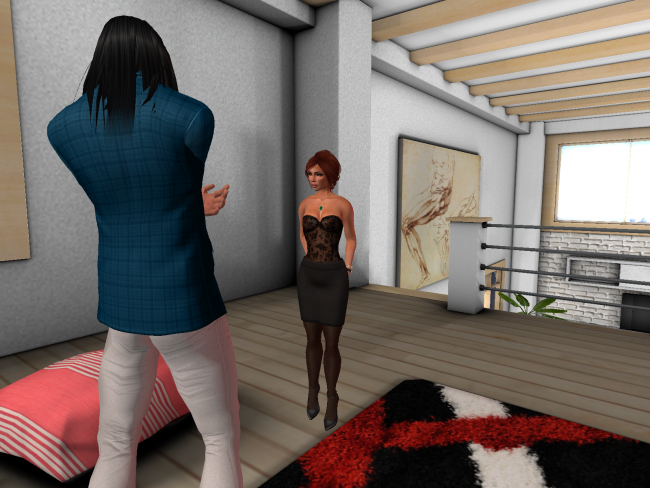 I was finally in my fine lingerie and spin to let him admire it. I love this kit, I have always felt confident and sexy in it. He pointed at my panties and shook his head at the same time … so I gently got rid of it with a seductive smile which seemed to please him again: it was not a frank smile but it was starting to look like it. He made a twirl with his finger and I understood he wanted to see my back, I moved accordingly turning back my head to look at him over my shoulder. He was staring right at my buttocks and seemed hypnotised. I could not prevent a giggle. 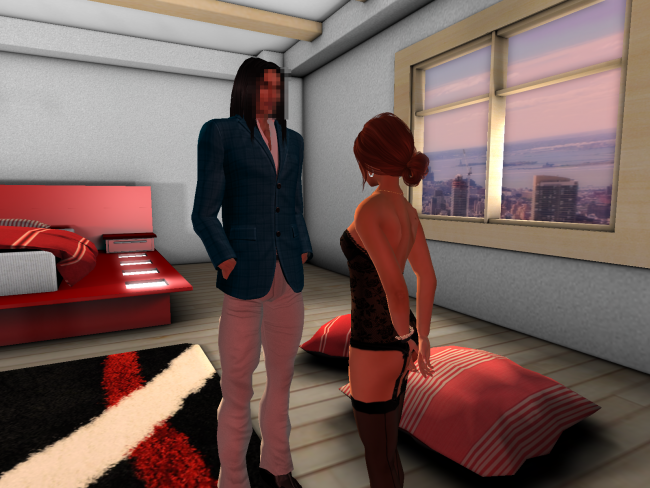 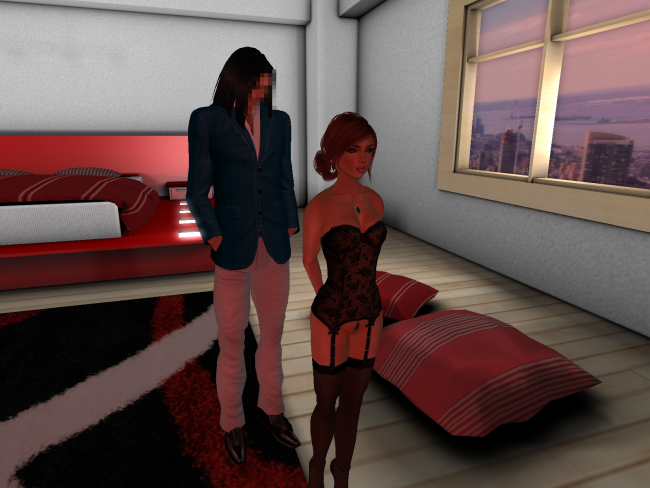 -“Do you like what you see?” I asked breaking the sacred silence.

He narrowed his eyes and put his finger on his lips “Shhhhhhh!”. He approached with the discretion and the agility of a cat and put his large and warm palm on my butt. The feeling was absolutely amazing. I could not resist to face him and I slowly move my lips towards his until we make contact in a passionate kiss. Meanwhile I let my hand covering his crotch and I really liked what I felt there … impressive is the word.

Breaking our embrace I sat on his bed inviting him to join me by tapping the mattress. He shook his head and took my hand to lead me to a strange apparel … it did not take me much time to understand what it was and I suddenly understood why he was so obsessed with my bottom: it was a spanking bench.

-“Ho, well! There’s an extra for these kind of things you know?” I said. “It’s not really part of the standard service.”

He looked at me defiantly and fetched another wad of banknotes from the inner pocket of his vest. He dropped it at my feet and stared at me still without an expression. It is very frustrating not to be able to read someone’s face. I slowly nodded, afraid and excited at the same time. He went and grabbed a box from under his bed. He got from it some shackles that he set on ankles and wrists and he then secured me on the spanking bench. 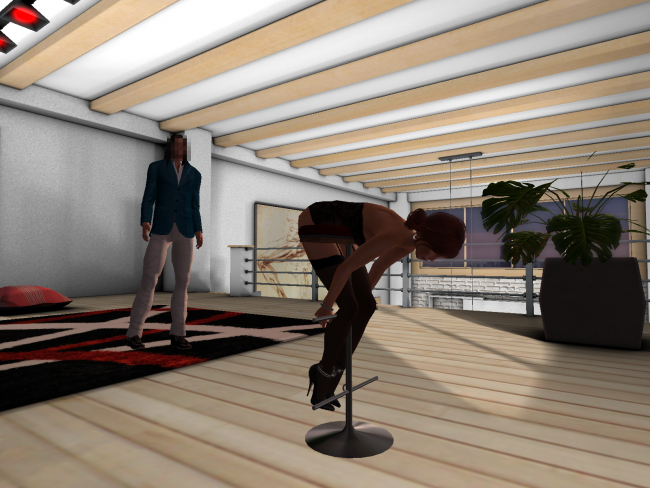 I cannot say I have not been spanked before, this is something men tend to appreciate, and to be honest me as well, it can be very enjoyable when done properly. However the least I can say about a spanking bench is that it is not particularly a comfortable thing. When I was finally set, he stayed behind me. I was not able to see what he was doing but I would bet he was contemplating my bottom again. After a few long minutes I felt his warm palm on my left buttock. He was gently caressing it, in a slow and circle motion. I did not know what to expect really, but I soon learnt about my fate. I received a very firm and powerful spank which instantly made me teary-eyed. Soon another spank of the same power hit me and another one. Soon my skin was on fire and a particular heavy one and let out a cry.

-“Shhhhhhhhhhh!”  I heard. I was very worried actually, the man was not pulling his slaps.

He finally broke off. I sighed. I could feel my heart beat in my buttocks nearly. At the same time I was seriously aroused, hard to admit but it is the truth. I was very happy to hear him unbuckle his pants, I wanted him hard. I felt with a real pleasure his hand exploring my privates and soon his hand was replaced by something very large, warm and hard. I gasped as he made his way in me and soon he was pumping hard … his heavy balls slapping which definitely tend to make me absolutely crazy. I was in ecstasy and came loudly and noisily but this time he did not hush, he was too busy jerking off on my back.

I heard him dress back and then he detached me. He handed me a towel and my clothes … it was apparently high time for me to leave. He patiently wait for me, sat on his bed, that I was ready to leave. Once done he accompanied me to the door and we shook hands, this is when he spoke for the first time in one hour.

-“Thank you Catherine! I definitely enjoyed your tender ass under my hand” he said.

I was so surprised he could actually speak I did not find my words before he slapped the door shut. He definitely played it very well, I was certain he was dumb. I exited the building with a sore bottom but significantly richer.

My dear readers, I think this story is maybe a little extreme compared to the standard, but still I enjoyed writing it. It is now your time to let me know, if you dare, what is your feeling. Would you have liked to be in my position? Maybe it happened to you already? Maybe you are a serial-spanker and do this regularly? Don’t be shy and let the little community of the readers what you think of giving a spank or receiving it. Personally my choice is done: I definitely like receiving one.

13 responses to “Another story of my whoring adventures, a silent encounter”