Silky pushed herself past me into the first cabin, a sigh of relief coming from her stall:
– “God this last Ice Tea was a bad idea.”

I laughed as I entered the next stall and locked the door behind me.
– “And the beer before does not help either”
– “I think we will be in Bay in about two more hours.”
– “Two hours?” I sighed. “Why this travel seems always longer on the back leg?”
– “Well I guess its because you would rather stay there and cause more mischief like a few days ago.” Silky said half to herself half to me.
– “Aww come on, you caused mischief, not me!!” I said laughing. “Can I have a pee now?”

Since she said nothing I imagined she was doing one of her incredibly bad Cathy impersonations. I heard the familiar sounds of her mobile being operated:
– “Do you have any plans for tonight? Shall I book a table at the Stray Cats?”
– “The Stray Cats? Well that sounds like a plan!”
– “Ok, we have a table!”

Suddenly I jumped when something tickled my arm:
– “Hey … uhm. Could it be, that we took the wrong door?” she said. I looked down my arm and saw Silky’s finger poking through the wall.
-“What the fuck is that?” I said giggling. “Is it … is it what I think it is?”

Silky giggled as well:
– “Judging from the comments around my side of the hole I would say yes. Want to try it?”

I laughed like crazy and knelt facing the wall to detail the little hole in the partition wall. No doubt possible, it was indeed a “glory hole”. I playfully licked Silky’s finger which was still wiggling through it.
– “Try it? Like this you mean?”

I heard her giggling on the other side, as she rigidly pointed her finger upward clearing her throat she said with a low voice:
– “Now look what kind of a cock sucking friend we have here.” Silky tried to suppress a bursting laughter before continuing “Suck my cock you slut. Milk every last drop from it!”

I was chuckling on my side. I listened carefully and I could hear a person walking, probably waiting for one of us to leave our cabin. That was exciting thinking there might be someone. I looked at the small hole and could still listen the stifled laugh of Silky. I lifted my skirt, exposing my bare bottom to the hole and started to slowly dance expecting that Silky will burst in laugh!
Obviously I didn’t fail in my display, as a crumbled note flew over into my stall which read “you crazy little fucker. STOP IT! You will so suffer for this.”

I grabbed a pen in my purse and wrote back “You are not obliged to watch the show, you little perv!” I slid the note back under the wall and resumed my exotic dance with a large smile across my face.

An upright middle finger through the glory hole was her answer, which had me at the brink of laughter again. The man outside the stalls obviously grew impatient and rattled at Silky’s door, which she answered with an annoyed grunting. With a loud banging on Silky’s door and a hefty curse he left the restroom finally. Once the restroom door fell into the lock, Silky came out of the stall heading to the washing basin.
– “Now that was a close one. Next time pay closer attention where we are heading.”

I joined her at the basin and smiled at her washing my hands.
-“Gosh, I thought I would burst into laugh. Interesting experience though! And by the way, you can pay attention too, not my fault!”. I gave her a little nudge passing behind her to go the hand dryer machine.

As i brushed past her, I noticed a finger slip under my skirt quickly running over my labia, her mouth close to my ear, she said in the same voice as earlier.
– “You haven’t finished your work cock sucker.” she burst into laughter and quickly made it for the exit. “Come on, I want to get to Bay City before the rush hour starts. I know you might be keen to do some mooning in a traffic jam, but I would love to avoid standing in the heat.”

I ran after her laughing.
– “You’re right, let’s go! Last at the car has a dare!” and I dashed on the parking lot to the car, all giggling and trying to keep my too short skirt in place.

Two hours later, finally safely arrived at Stray Cats for a deserved dinner , Silky left the table to go to the ladies (this time she checked before entering). I understood she played with her phone again when I received this “charming” text and outrageous picture from my dear cousin Ann. 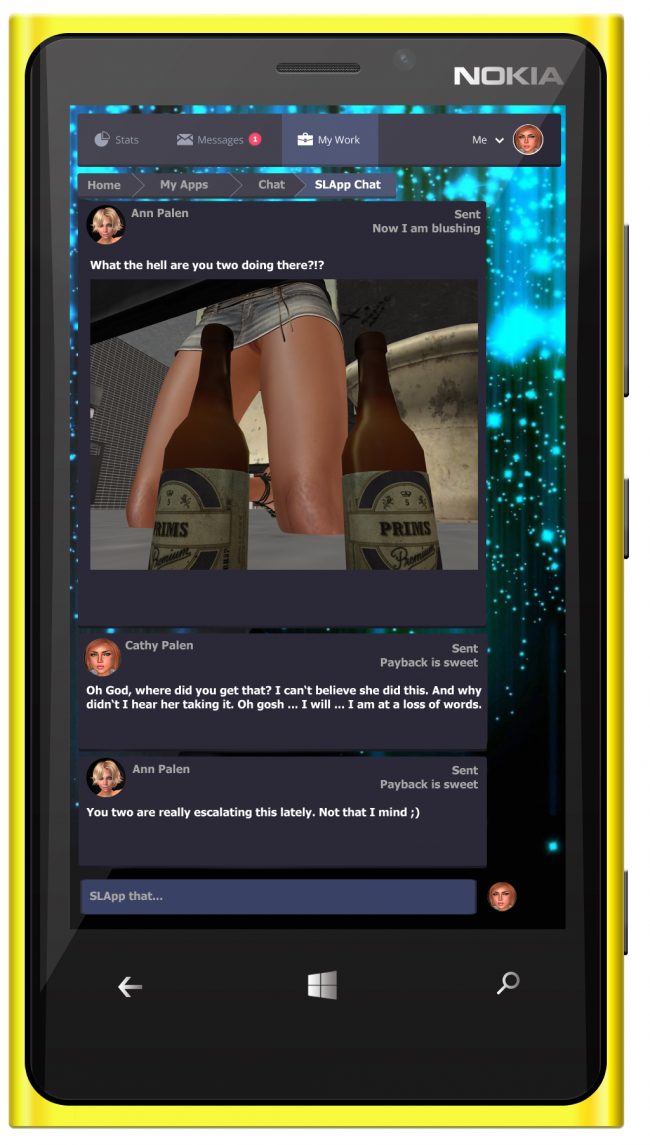 Navigate through the postcards