Walking the streets is (sometimes) full of surprises

Walking the streets is an activity that leads to a lot of encounters, and I do not mean only sexual ones here, I mean we meet people, lot of them. Most of these men, a few women too, are fueled by the same desire and have the same behaviors towards the girls who sell themselves for tender and intimate moments. However a few of the customers are out of standard and can surprise even the most experienced whore. Their expectations or behavior are different, this is one in one hundred, but it actually happens with a certain regularity, like if there is a sort of scientific explanation behind it. Who knows, maybe there is one.

The last occurrence for me was a very polite man. I can say from the way he was talking that he is a man of education. We had a long talk together in the streets, something most of the girls here do not like because it takes their time and opportunities to hook a client in the mean time. Personally, I think this is part of the business, and sometimes people need to talk and we have to listen to them, to their stories, their injuries and their weaknesses, this is what we should all do. Actually I think I am a natural into this and I very willingly do this. In this particular case, the man was interesting and I was curious. His language level was very good and I enjoyed every minutes of our conversation. It was some sort of game between the whore and her client to be: he, revealing himself, letting it all go and me listening and careful, but still trying to hook him. He was so skilled dodging my poor attempts to seduce him, he definitely won.

Maybe he felt pity for me when he finally invited me to his place for a dance. He insisted and paid me in full. I did not know exactly what to expect, did he finally surrendered to my charms, was it pity, would we dance? I did not know where to stand and he surprised me fully when he paid me in full and the only thing we actually did was just … dancing and chatting. He was flirty, charming, he offered me some outfits, including a latex one which I understood was one of his fantasy, but that was all. I asked him a few times if he was in for more “serious” business and each time he declined, he was just fine spending time with me and dance in his home. It was a refreshing moment from my point of view: a calm moment with a smart person and well, I just liked being with him. I do not know if he will come again, but I expect he will. 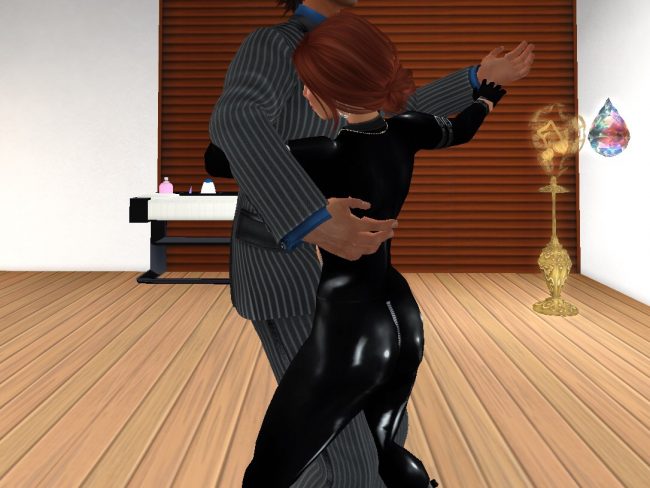 I am quite sure that those among you who play these little whoring games in SecondLife have experienced this at least one time. If you are not too shy, maybe you will yourselves share it?