NIP Dare #15: Roller-skates and nothing else

Context: You will select a town with some traffic and you will skate through the city center. Every 10 minutes you will drop one item of clothing until you end up skating with nothing else than the skates. Beware of the police patrol!

Clothing: An outfit to go roller-skating that you will regularly strip.

Information for my readers:

This dare brought me to a sim I went already: Castle Rock (see Oops I am naked and Oops I am naked again (Unscheduled dare) ). The reason of this choice is that there are active police patrols and consequently a risk of getting arrested … such a thrill!

So here I was again ready to do some mischief and expose myself to the peaceful citizens of a small town: yes I know I am a very bad girl! That’s me. I just cannot resist it. For the outfit, I did not select something very original: a tank top, hot-pants and a bikini underneath. 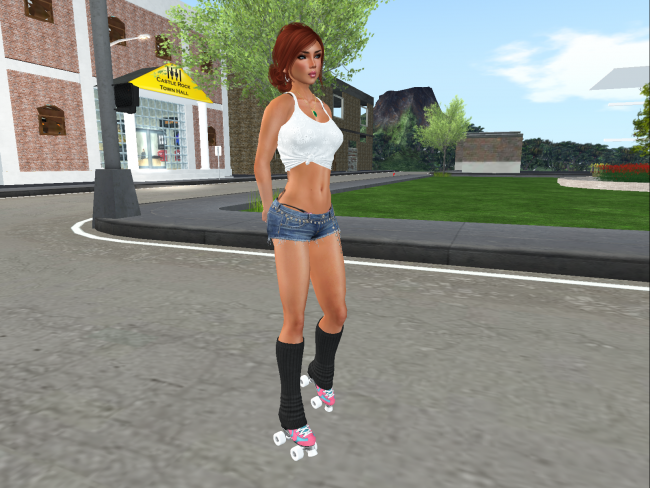 So I started warming-up and skated the area to scout where the people were and what were the best spots to avoid getting caught. I like the risks of course, but the main goal is to avoid getting arrested no? You want me to get arrested, awww that is not sweet of you at all! So definitely the penitentiary and all the streets near it were too avoid, it was very crowded at the time of the dare … the residential area and the road alongside the beach seemed clear, so this were I decided I would flash.

It took me some time to decide myself to give it a go and well at the same time I got all sweaty, definitely a good incentive to start peeling some layers … and this how I got rid of my tank top. I was still decent actually, this was not the first time I skated in a bikini top and I think this is allowed in most countries, so I was not too worried. However I knew I triggered the timer: every ten minutes I would have to remove something. I actually setup an alarm on my watch to be reminded of it. 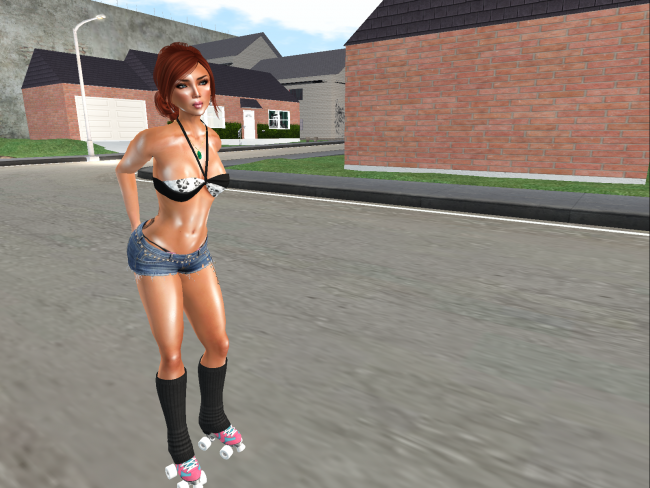 And of course the ten minutes passed, a lot quicker than what I thought. I was in the suburbs of the town, only small houses around and I hoped most of them were at work at that time. I quickly checked behind me: the streets was completely desert … and off the hot-pants. I throw them in a nearby bush, trying to memorize its location to get it back later. So now what? Skating in bikini is a very Florida way isn’t it? I could be lectured by the police but the risk was not high … depending on the cop actually. I was starting to really enjoy it, the caress of the air on my skin plus the added risk. I do not need to draw a picture, you see what I mean right?

I even sneaked into the little church which was luckily empty when I passed it. It reminded me of one of my first dare (see NIP Dare #2 (Scandal in the monastery) ). The fresh air made me good and I was able to make my way out and reach the next corner where the bank is … when my watch alarm rang again. “Oooooops!” Things were going to get pretty serious now. I was now with a terrible dilemma: top or bottom? That was the question. Well I did not think too much and preferred to loose the comfort of the bra rather than exposing my bottom. Actually in 10 minutes I knew that I would have to! I am crazy definitely, but I like this too much to cancel. And off the bra …

I resumed my crazy skating going further in the suburb area. This where I spotted a police car … it looked a big dangerous but I decided I had to do a picture with the police car in the background, and I did. I fled very quickly and returned to the previous corner, passed the bank (which was empty too), and arrived at the main place of the town where a tower monument is erected for whatever reason. And guess what … that watch of mine, it rang again! And yes I did it, I slipped the panties down my legs and managed, without falling to remove it completely: here I was in all my glory ! I shivered and felt incredibly good! 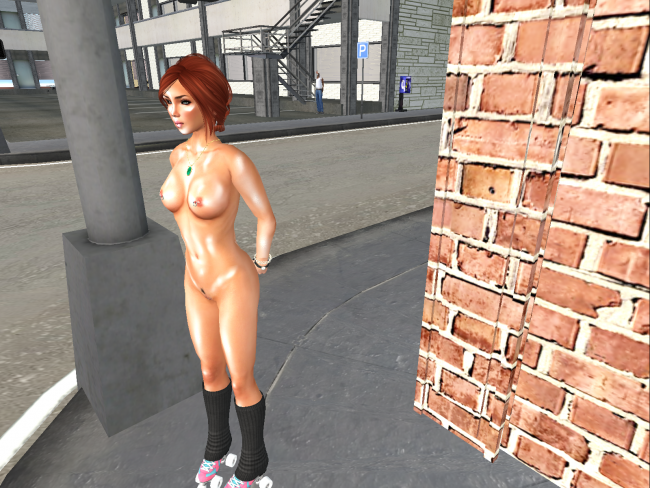 I jumped when I heard someone whistling. I checked behind me and I saw the old guy who was staring at me. I smiled at him and waved and then I dashed, crossing the street to reach the middle of the place. It was so exciting. At any moment I could get arrested but I was no more conscious of the risks, I was so overwhelmed by the feeling, by the emotion, let’s say the word: by the arousal … Yes I was, very much indeed! I flashed all the corners of the place, passing in front of the shops, not checking whether or not there were clerk or people in them … I finished the dare by entering the monument itself where the fresh air (again) made me come back to my senses.

A bit more nervous I sneaked out of the monument and followed the path I came from to collect all my clothes back … until I got dressed decently again. I nervously giggled for some time when I put my shirt back on! Such a thrill again! The police is not very efficient in this town definitely. 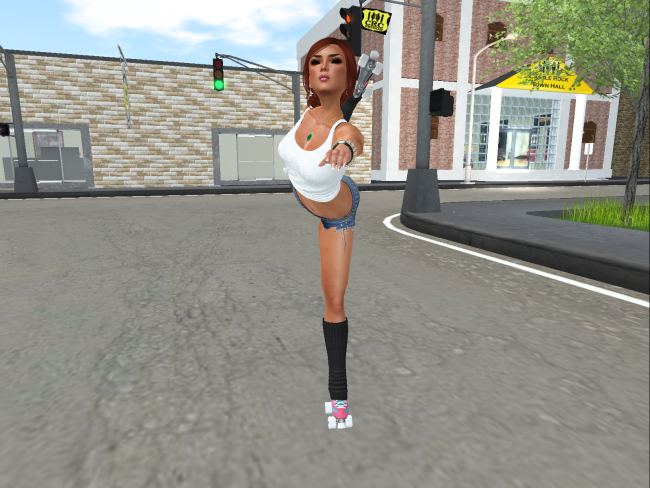 Big thanks to my anonymous reader for this very amusing and original dare. The same reader submitted the dare #14 as well which is, I think, a very good one too. I do not do it for now because I have some further plans to do it. You will know more when I am ready.

I am waiting for your comments, bad or good, as usual!