It is some time now that I want to tell you that crazy story … As most of you probably know, I work at Street Whores sim. The name says it all, you would have guessed what the purpose of this place is. I never had any problems with my co-workers until that day.

Actually I was contacted by my very good friend and reader of this blog: Aaron. Aaron is also my most regular customer … so that day he called to hire me. I was not hitting the streets at that moment, so I quickly changed into something more revealing, and agreed to meet him at my usual “workplace”. He arrived before me, I admit I can spend some time changing!

As I would have expected, all my colleagues tried to hook him, this is the game of the streets, you have to seduce faster than the competition if you want to earn money in this jungle. This time was no exception, what I regret is that, most of them, are doing the flirting in “IM” instead of “Local Chat” (despite the rules stating against it) … I can only imagine how disturbing it can be for our customers when they arrive … having many IMs reaching them at the same time from the different whores present. It must feel like a shipwreck victim on a raft, circled by sharks. No surprise that many times our customers flee * sighs *. 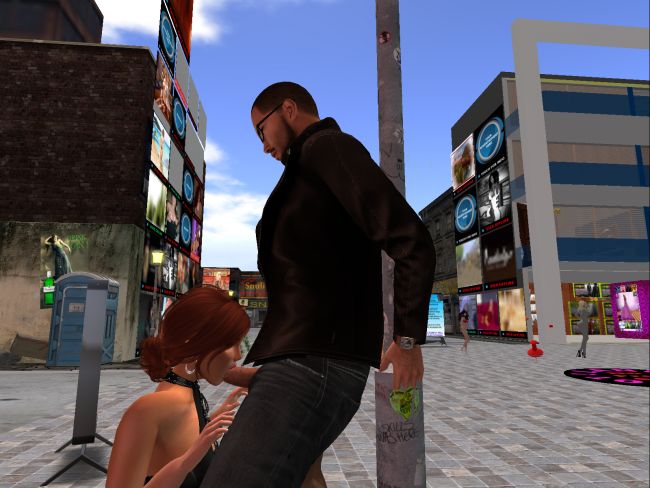 My co-workers started to make nasty comments, one of them even camped just besides me and tried to push me. Aaron started to become nervous and argued that there was no rule against us doing this directly in the streets. The girls complained about the fact it was not good for business … Really?

Well, I decided to dodge the fight and we moved to the end of the streets with Aaron where we could resume our activities in the open air as we intended to do.

After Aaron left, I returned to the main place where all the girls are, but they were very grumpy and did not want to talk to me anymore. Isn’t it crazy?

Thanks to Aaron, I had a lot of fun anyway, and I hope he did too.

0 responses to “The grumpy whores”