Wild night at the theater

Mario and I had a date that night. It was quite a long time I had not seen him, last time was at his private club with Javo. I was actually quite excited to spend the evening with him, each time is such an adventure. Mario is definitely the perfect representation of the bad guy, but well, this is what is making him interesting and exciting.

He came to fetch me at my place, riding a very impressive bike. I would have never dared to ride something like this, but with Mario it was ok, I am somewhat becoming different, unleashing the bad girl sleeping within me. Our plan was to go for a quick dinner together and then to the theater, we did not decide about the movie itself. Then I guessed we would find a private place to … well you guessed it, didn’t you? 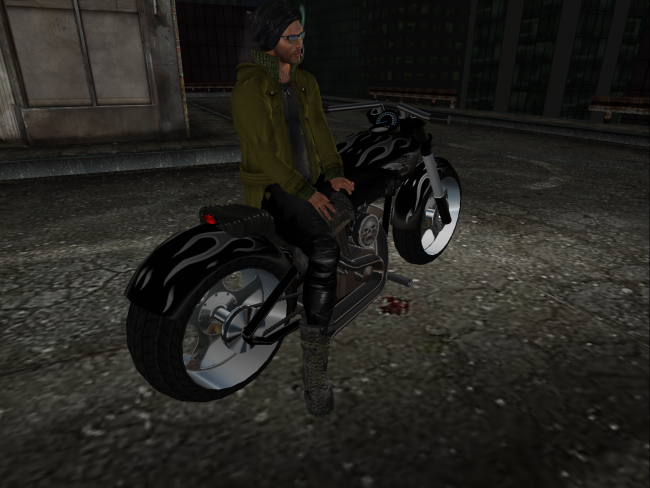 We stopped at a little pizzeria which Mario seemed to know very well. The waitress called him by his first name when he arrived. He was apparently a regular. We ordered and were quickly served. We chatted a lot, telling each others what happened in our respective lives. I took some news from Javo: he has been jailed for some time according to Mario, so it answered one of the question I had about the evening: Javo would not be joining us. After all it was maybe what it looked like, a romantic date.Mario paid the bill and we went back to his impressive bike and rode up to the theater. One of the good things about this kind of vehicles is that you are very quickly parked. 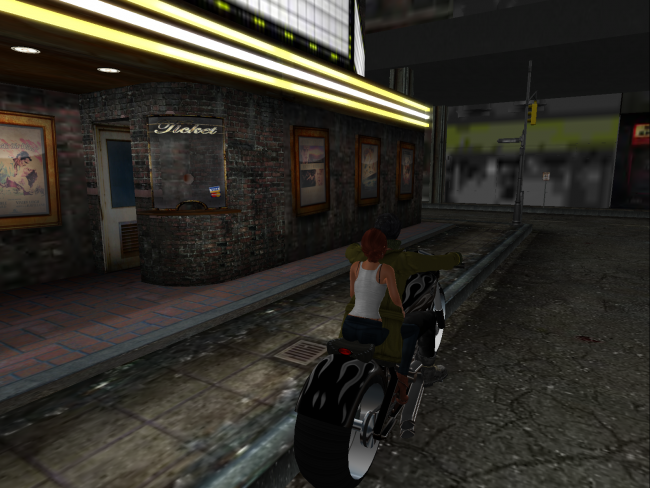 In no time we were queuing at the till and we were soon in. We sat in a quiet corner, patiently waiting for the movie to start. To my surprise we were the only clients … it is usually a bad sign about the quality of what was about to be projected. I had no time to give it further thoughts, the lights switched off and the movie finally started. 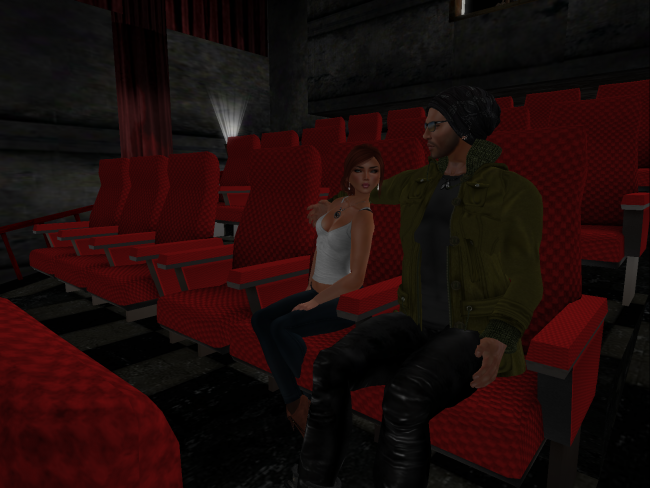 Mario very quickly passed his arms around my neck and soon I could feel his warm hand under my tank top. I frowned and made him remove his hand, he chuckled. He fetched out a small transparent bag from his pocket, I quickly guessed what was the white powder in it. Mario displayed a wide smile.

-“A few of this should help you to relax babe!” he said.

At this moment, a guy entered and passed us. I had just enough time to take Mario’s hand in mine and to close it hiding the little bag into his palm. We looked at each others and giggled, it was close! The guy sat a few rows behind us and did not seem to have noticed anything. We both sighed in relief.

Mario then opened the little bag and spread a line of coke on the back of his hand, I nervously checked on the guy behind, happily he seemed to be focused on the movie. Mario took advantage of a noisy scene to snort the line and then closing his eyes he laid on the back of his armchair. He seemed to enjoy it, he bent over me and whispered in my ears:

-“I had to find a new provider after Javo’s arrest, but definitely this stuff is very good. Want some babe?”

I grinned and nodded to him, but he took me by surprise when he unbuckled his belt and slid down his pants and boxer mid-thigh. He rolled up his shirt and spread a line of coke between his navel and the base of his long erected penis. That was incredibly risky!

-“Help yourself!” he said looking at me with a large smile. 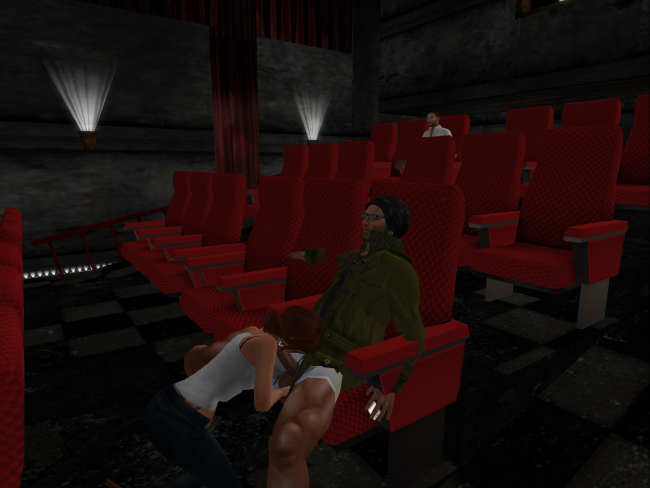 I quickly checked behind and, reassured, I dropped on my knee and snorted the coke all along. I closed my eyes and started to feel the drug pushing into my body. I stared at Mario who smiled at me. He pointed at his erected penis and I knew what he expected of me. It was definitely very daring to do it here, but I was now in the mood, and I knew the more the time would pass, the less I would care about my environment. The drug would get on me and I could already feel that. 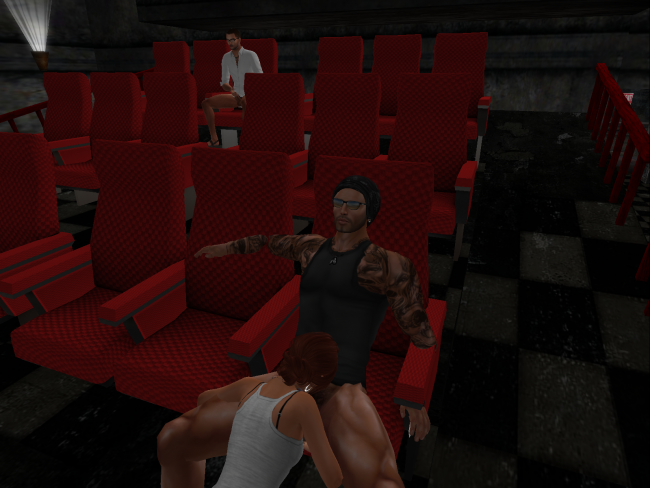 I started to lick him avidly, the tickling between my legs was becoming more and more present, yes I was aroused to do this, even more knowing a man was sitting a few rows behind us. At any moment we could be caught in the act. The drug was un-inhibiting me and Mario was probably like me, even him who is usually more relaxed than me about those things.

I peeled from my tank top, which pleased the man very much judging by his face. I whispered in Mario’s ear to tell him that we were watched. Mario grinned and whispered back “Is it arousing you little bitch?”. I giggled and slowly nodded in answer to this. “Let’s give him a proper show then!” he said flipping me on his lap. I was now sat my back against his torso. He was groping my breasts, and he unbuttoned my jeans, I could feel his large palm invading, sliding down, inside my panties.  I was in heaven, the coke helping a lot in the process.

-“If you want him to join us, wave him here Cat! I am more than happy to share. Up to you bitch!”

I looked aghast at Mario. What I was living was incredibly wild, but it could be even more … all it needed was a sign from me, and I was sure the man would run to us. I hesitated a few seconds, but the best moment, which sent strong shivers in my whole body, was when I wiggled my finger inviting him to come with us. He did not wait long and did not took the precaution to dress back and sat butt naked next to us. Mario welcomed the man with a wicked smile, then he pulled hard on my jeans and stripped me naked from the waist down. Kneeling between my legs, he plunged his tongue in my slit and I could not prevent a loud moan. It made our new neighbor to chuckle. I stared at him, I could clearly see he was aroused like hell … actually his erected dick was speaking for him.

Mario pushed me between the two of them, and bending, he drew a coke line on our new friend tummy this time. The man looked at me wondering if I would dare snorting from him…. but I dared, and a few seconds later I was sucking him, while Mario was taking care of me with his fingers. I was definitely high, and the guys ensured, by making me snorting a few lines, I stayed that way. I was feeling I was in a permanent orgasm, it was incredible.

I do not remember all, I was rather lucid … but I clearly remember that at one point another man arrived and sat with us and shortly after, Mario carried me in his strong arms to the projection room … Then he needled me, I do not remember what he told me he injected into my system, but I lost consciousness, and the rest I could not remember, but it was a pleasant, my body never lies about these things, I had a fucking good time!

I waked up the next morning in my bedroom alone, wondering if I had a naughty dream and that was all. A picture laid on my bedside table, figuring myself with Mario and some strangers I do not know, having very wild sex. On the back of the picture, Mario wrote:

“Thanks bitch, fuck you soon!”

No doubt, it really happened.

This is the first time I had a naughty roleplay with so many participants. So I would like to thank very deeply, the participants of this very wild party, in order of appearance: Mario, Aaron, Ash and Mister X. You have all been absolutely fantastic !! I definitely hope you enjoyed it as much as I did.

I wonder who would dare to comment this post, this is not a reading for the shy ones … but please dare to tell me what you thought, like or dislike. If you do not want to see this kind of posts ever, let me know. If you want more of these, let me know too!

Thanks for your help and support!

5 responses to “Wild night at the theater”