Girls’ night out in men’s club

The other day, Alma and I were in the mood for some adventures, and she come up with the idea to visit a place which sounds pretty adventurous precisely, and could serve very well our purpose. The place is called “The gentleman’s retreat”. It might sound like it is a retirement home for some rich and well brought up men, enjoying the end of their life in a privileged setting, so let me warn you: this is definitely not the case.

So what it is exactly? It is one of the misogynistic place of SecondLife, where men rule and women obey. It is all about the difference in gender, and the fantasy, men have, that they should rule because they have a little something between their legs. Is it the truth, I do not believe so, but it is definitely, from my perspective, very exciting. I admit I have a thing for powerful and strong men, and if they are well hung, it is definitely a good bonus I am ready to take. Moreover I was in for some mischief, so provoking those men, in their environment, was definitely going to be good.

Alma went there first to scout the place. She told me the place has a dress code for ladies. Of course! What else to expect from such premises. It is actually rather simple, we must show some skin to these lovely gentlemen. Their preference goes for lingerie set, but swimsuits, short skirts and dresses, or hot pants can go as well. So we figured out with Alma what to wear and we gathered at the entry door of the mansion. 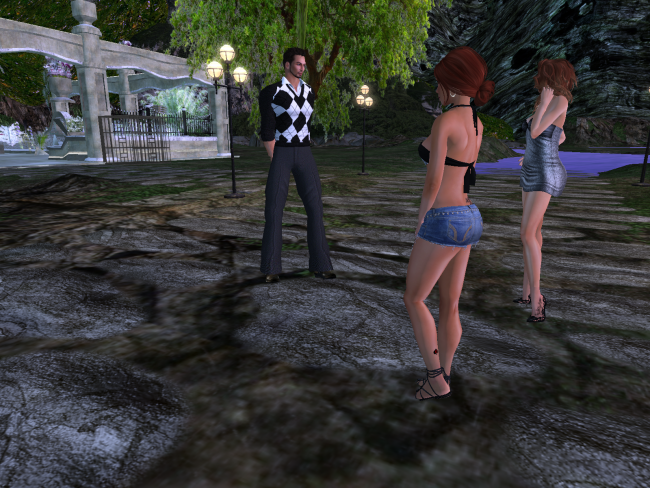 The first person we met was actually one of these gentlemen … he welcomed us with those very introductory words : “Nice to see you here cunts” … followed a few seconds later by “I have to run for now, but I will see you later”. Well, this was actually very rude, but this is what this place about, so who I am to complain about it right? It made me smile actually, men are always in a hurry, either to fuck you, or to leave. He was a clear illustration of his gender. Well I am kidding guys, do not take my words to seriously, but I actually like to provoke you a little.

So he went and we entered into the building. A quite fine house actually, decorated with taste, with nice furniture everywhere. However this is when I started to get disappointed: the place was occupied by women everywhere … not a single powerful man to play with, only ladies, who like me and Alma were looking for the same thing: I felt horribly predictable and conventional … in a way.

Not turning a hair, Alma and I decided to visit and meet the autochthons who appear to be quite speechless. We finally resolved to jump in the hot tub set in the middle of one of the large halls of the mansion. To my surprise, Alma stripped naked! Actually she is the bold one, not me. I giggled and plunged myself into the warm water … how relaxing and strange. Being in a stranger house, enjoying a bath in an open room where everybody can arrive. Such craziness can only happen in SecondLife. I and Alma chit chatted a big part of the night … we only have been “disturbed” one time by a man … who fell in the tub … and worst of all for such a place: he apologized and fled.

So I had a really pleasant night actually, but unless we have been here at a particular wrong time, the place is not what it claims to be, it is safe to go there, adventurers move along ! Thanks Alma for spending the night with, it would have been quite boring without you.

0 responses to “Girls’ night out in men’s club”