Return to the mas

Yes I have written the mas … if you are not familiar with the South of France, you might not know what a mas is: it is actually a typical farmhouse you can find mainly in Provence. You have to pronounce it like the second syllabus of grand ma: “Ma”. Yessss, your french is improving, congratulations!!!

I have been there one time with Pere Vert (look at this post). He is one very original avatar of SecondLife, well in his mindset at least, because concerning his appearance, he is probably one of the laziest one. However he has put a lot of work on his village around the mas, and on the mas itself of course. If you did not get a chance to visit it yet, have a look, you will find yourself in the middle of a typical very small village of France. In the middle of winter it is a good feeling, the sun is there! (taxi: Le Lawangwen).

When I arrived, he was wearing the same strange cap and the same smile as well. He did the effort to dress in jeans this time, well, yes he is a nudist, at least around his own pool. His first remark was “You’re wearing far too much clothes Cath!”. Typical Pere Vert. I knew where he wanted to lead this meeting, actually he did not make it a secret from the beginning, and to be honest the bulge in his pants was speaking for him.

I definitely wanted to have some fun, it was a long time I did not have a nice sex nearby a pool. I was rewarded with cat whistles when I peeled from my jumper, shirt and skirt. 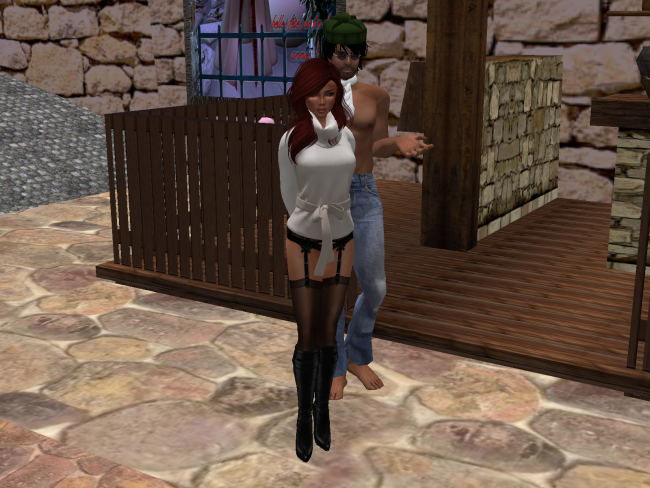 Pere Vert seemed to appreciate my lingerie set. He took my hand and led me behind the railing besides the little bar.

-“Now my dear Cath, just bend over and admire the view over the fields, I will do the rest” he said.

I bent and looked back with a large smile. He was stripping from his jeans and a few seconds late I felt him, all of him, and we had a great time together.

0 responses to “Return to the mas”