I was hitting the streets the other day, trying to make some cash to finance my very expensive future new mesh look. As usual I was wandering at “Street Whores”, a very famous place for this kind of business. It was pretty crowded that night, but unfortunately I did not hook any prospect. My fellow colleagues and competitors were definitely better than me. This activity is made of a lot of waiting, and very few actions, I know it very well now. I was killing the time, playing with the settings of the blog and discussing by IM with some of my friends. 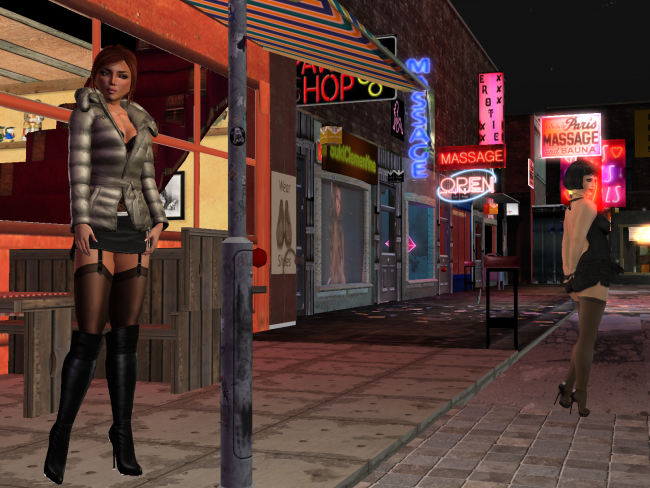 It was getting pretty late, and I was about to quit, when Mario called me. Do you remember him? If not, you can read the adventures we had together already: Bring the danger everywhere and the nude in public dare in cuba. Mario invited me to his place, of course I had no doubt on his intentions, I gladly accepted his invitation, I was definitely in the mood. 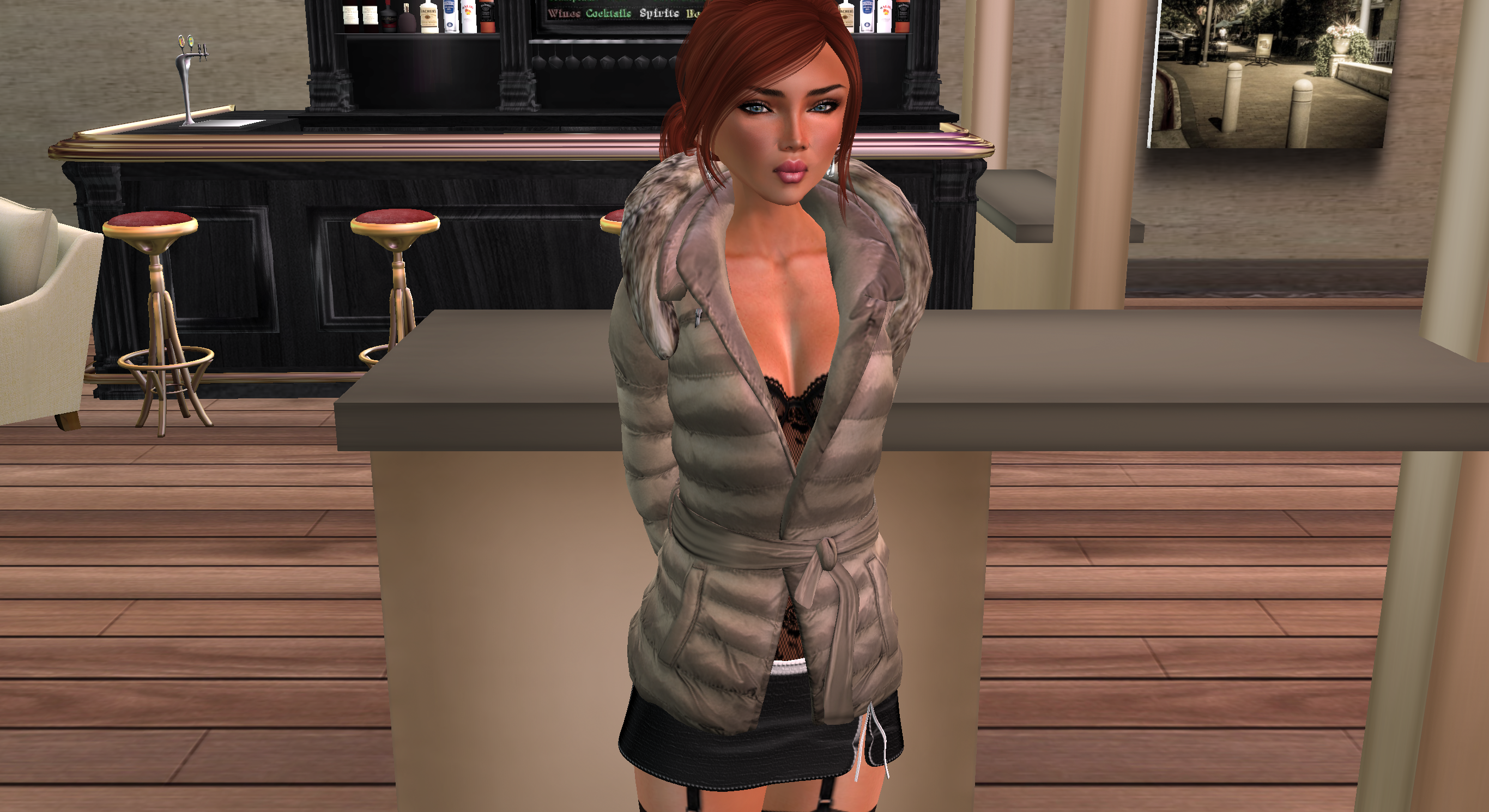 He was comfortably sat on his sofa when I arrived and he invited me to join him. I was a bit tired, standing for long periods when hooking is a real pain for the feet and the back, particularly with heels … those who never wore heels cannot understand.  We took our time to catch up, we discussed a long time, me laying on the sofa, my head on his laps, it was very relaxing and comforting after the long night out.

We moved to the bar, a bar very similar to the one Caroline had installed in the mansion during last summer, and we shared a glass of champagne, maybe two actually, I cannot remember precisely. 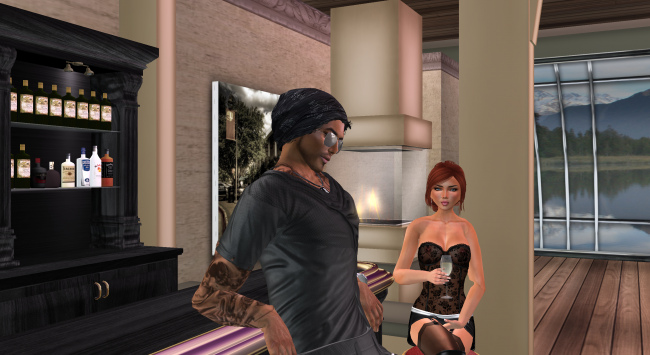 This is when he fetched out of his inside pocket a little plastic bag containing white powder, I knew too well where it would lead us:

-“Come on Catherine, this is the best quality, you cannot miss this.”

I smiled and nodded and he led me to the coffee table in the middle of the living room on which he “prepared” a line for me.  I knelt and snorted it, then a second one. Mario did the same. It did not take long before I started to feel the exhilarating effects of the drug (well at least I had to role play its effects, but it was kinda fun). 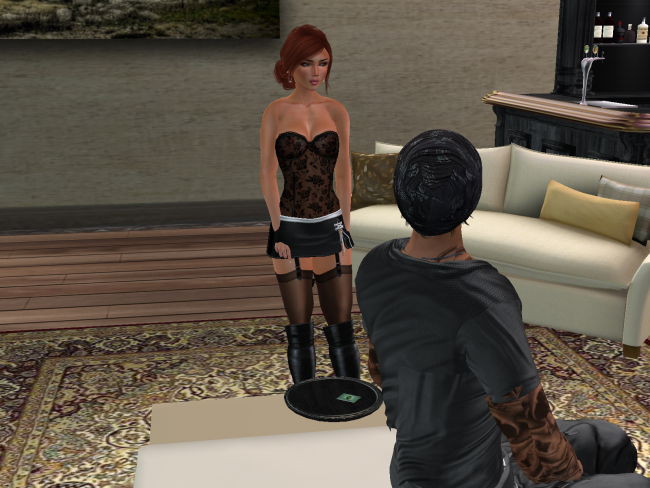 We talked and laughed a lot, enjoying a very special evening … then the door bell rang and he went to open the door to a splendid black man. Not sure I mentioned already that I have something for black men, and not only because of their manhood reputation 🙂 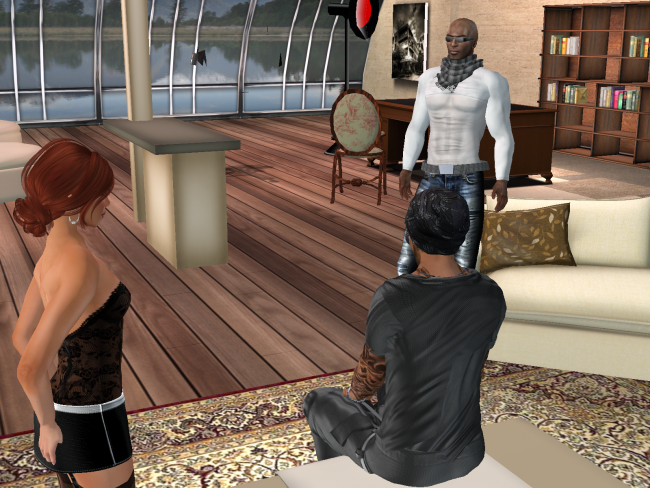 Javo was his name, and I learnt he was actually the candyman of Mario … and he was definitely so handsome, well built, with a killer smile. I cannot remember if I did anything special to make it known that he was my taste of men, but the evening turned more sensual very soon.

We danced the three of us, I had Mario and Javo dancing very near of me, their hands were touching me, and I acted very flirty, brushing my bottom on them, hugging them tightly, I was definitely in a naughty mood and they did not seem to complain. I realized giggling that they succeeded in stealing my skirt, I still do not know how they managed it, but it is one more proof that I was not in control at all anymore. I was proudly dancing in my sexy undies with those two sexy men around me … ho yes you know exactly what I had in mind then, and believe me, they thought the same.

And of course, when all parties agree it happens, then … it happened. They took me upstairs to the bedroom and we had a very very wild party all together … From here the pictures will speak better than any word.

We parted two hours later, but we resolved to make it again … As Javo said “we are making a good team!” and I cannot agree more.