NIP Dare #9: The striptease of the cuban singer

UPDATED WITH PICTURES AND STORY

Context: You will come at the Buena Vista Social Club dressed as a cuban dancer. We will arrange to have an audience, among which we will select a few to play the music band. You will dance on-stage and at each song change, you will remove on item of clothing until there is nothing more to remove. What will happen next is up to you.
Location: Buena Vista Social Club
Clothing: A cuban dancer costume (salsa).
Information for my readers:

When I interviewed Kod, he proposed that I could have a few of my “Nude in Public” dares on his sim. This is what happened, a first dare and maybe others to come in the near future.

The day was coming to an end, and I knew it meant my little dare was about to happen. For a change I arrived very early, I wanted to be absolutely ready. We took some time with Kod to adjust and prepare the event … The more the time passed, the more I was stressed. It might sound stupid or odd, but nevertheless this is how I felt then.

Around 11 PM, the guests started to arrive, and as usual they gathered on the little place in front of the cantina (the little bar of the street). The people of Cuba, or at least the ones coming to the sim, are very enjoyable and playful people. It did not take a long time before they started to dance, speaking loudly, laughing.

I was at this moment too nervous to take part and so I isolated myself into the club itself, trying to focus on the event to come. I nervously looked at my watch every minutes, and still the time passed so quickly.

11:30 PM, this moment arrived finally. Kod invited the crowd to join him in the club. Kod entered the club, where I was anxiously waiting, and directly went on the little stage, behind the mic. The crowd followed quite rapidly and soon we were all gathered in front of Kod.
-“Excuse me, we are about to begin.” he said with a strong voice. “First of all, thanks to everybody who came today!”

The crowd applauded, chanting the name of Kod. I forgot to mention the people there, quite unexpectedly, were exclusively females. So to say the least, Kod was surrounded by his groupies.

-“Thank you, thank you” said Kod. “So tonight, we will have, as I promised, a cuban concert. I will be your pianist and Cathy …” * he invited me to join on stage * “… Cathy will sing for you. So please big applauses for Cathy!”

The crowd did not need to be asked twice and cheered loudly. It was quite intimidating actually, but Kod seemed to deal with that perfectly. Personally I was shaking from head to toe.

Kod continued:
-“Well this concert will be a bit special, Cathy and I have prepared a little surprise. I do not know if you remember, but during my interview last week I proposed Cathy to perform some her “Nude in Public” dares here, in our little Cuba… and of course, she accepted. So Cathy will sing for us, and strip one item of clothing after each song. So please, round of applause to cheer her up.” Kod clasps in his hands, immediately followed by the crowd of girls. It was amazing, at the same time terrifying and exciting. Not sure you can imagine if you never tried something like that. Kod let the mic and sat at the piano.

In the crowd, I was able to spot some known faces: Sarah, Val, Alma, Hangie and Lizz. It was a bit reassuring. And Kod was by my side at the piano. I stood behind the mic and gave a look to Kod who nodded to me, he was ready and played the first notes of “Hastra Siempre Comandante“, an hymn to the Che. I started to sing, unsure about my voice, but all was ok and my voice filled the little room of the club. I saw the girls smiling and applauding … and as it always happened here, they started to dance in a splendid improvised choreography. I was moved, it was a magic moment.

The song eventually came to an end. I bowed, and Kod and I received an amazing ovation. I loved every seconds of that. I winked to Kod and he winked back, playing this time “Quizas, Quizas, Quizas“. I started to sing while committing to my dare, a very easy part actually: while singing I removed my gloves and threw them on top of the piano. Once done I was able to focus on my vocal performance, because this one was really not easy, but once again I could manage. We got again a big cheering from the crowd of girls in front of us. 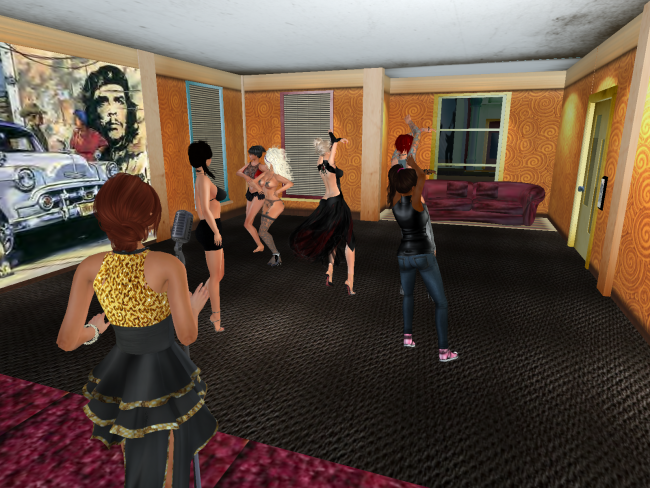 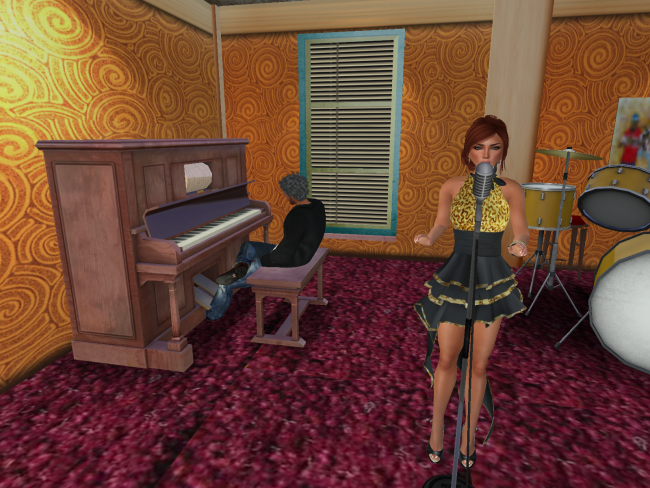 I walked to Kod and presented my back to him, facing the crowd with a big smile. I waved to them to get even more cheering while Kod was unzipping the back of my dress. I let it drop on the floor and got some whistling and noisy cheerings. The atmosphere was absolutely crazy. I moved back behind the mic and Kod resumed to play: a nice song from Hugh Laurie “The weed’s smoker dream“(I have always been in love with Doctor House). There I was, standing in front of the crowd, in a chic bustier and tiny panties, I felt so daring and also so proud of myself. And I sang again, knowing all too well that my lingerie will have to go shortly. I confess I got very aroused then. 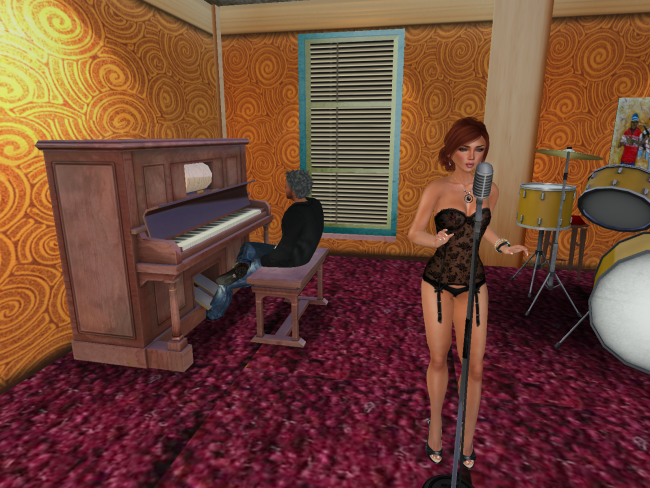 The assistance expressed once again its satisfaction at the end of the performance, but this time Kod did not let them time to pause and carried on playing an Adele tune “Someone like you” … I had just time to join him by the piano, as we planned to do on that particular song. 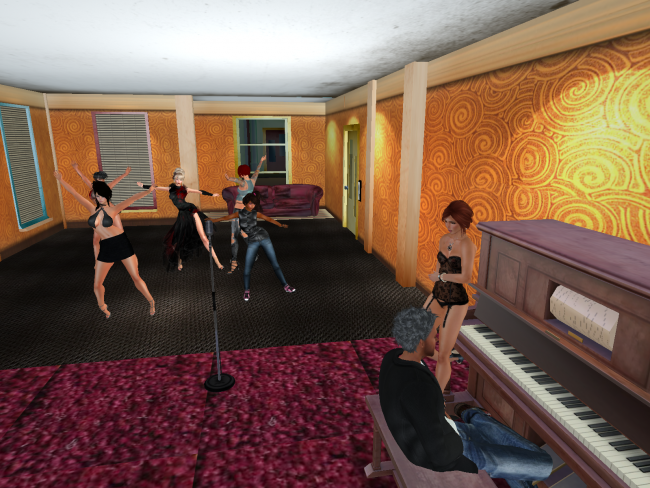 The thing is that I had to start singing without having removed anything … my bustier being a bit complicated to remove, I had no other option than my panties … so did I. I managed to make them pass my hips. There I was, exposing my pussy to Kod mainly. So exciting. The girls were more and more crazy, I could not believe it. Kod was smiling to me while playing until the last note of the song. We got a thunder of applause and I am not sure it was only for the musical performance. Still, it was enjoyable to get that.

Kod came by my side and bowed with me. He then helped me out of my bustier and came back to the piano, leaving me facing the girls fully nude, exception of my heels which I decided to keep. I felt all their gaze on my skin as it was a caress, I had goose bumps … 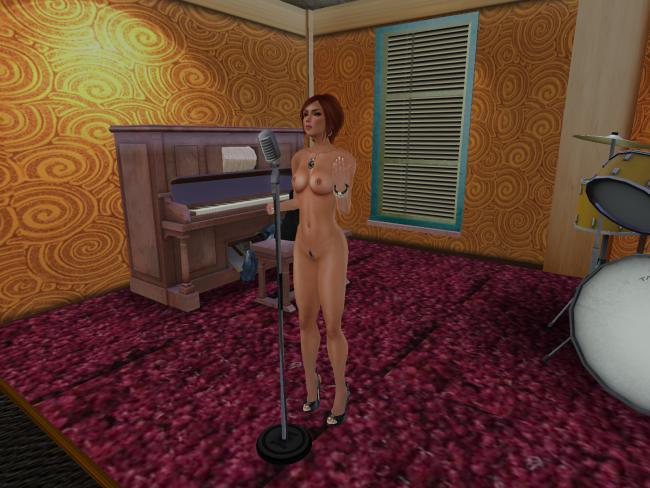 Then I heard the first notes of Donna Summer very well known track. I danced and sang at the same time, completely exhilirated. Kod played very well and the girls danced again like crazy.

I was so excited then, my body was on fire … and I stepped down from the stage and danced with the girls around me. It was all cheering and dances. Kod was now alone at the drums and put on some cuban music concert stream. 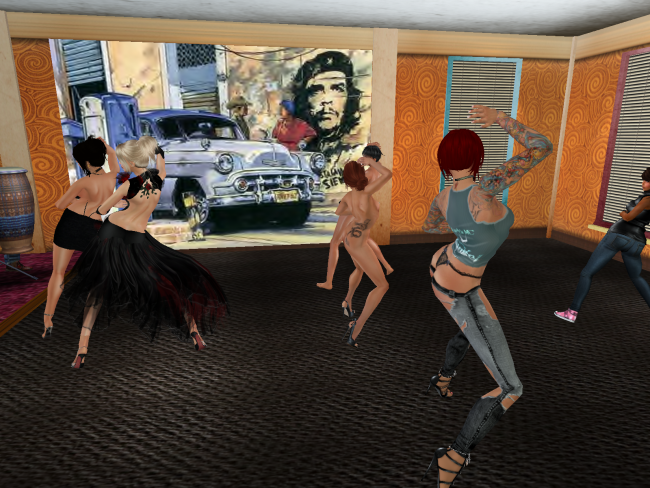 I danced and danced and at one time I just said:
-“Come on girl, who is with me? I dare you to strip naked and dance with me … it feels sooo goooood!”

And the party became out of control. I was expecting a few of them would … but they all did. Well exception of Sarah who kept modest, well at least until I cheered her a little to do so. And soon it was a full room of naked ladies dancing around. I am quite sure Kod appreciated the nice show we were. He let his vest and shirt go at one point but he kept his jeans on … I think he wanted to hide we turned him on. 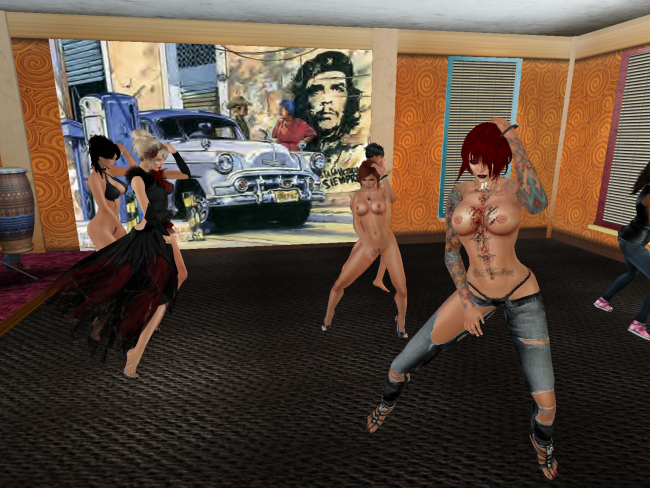 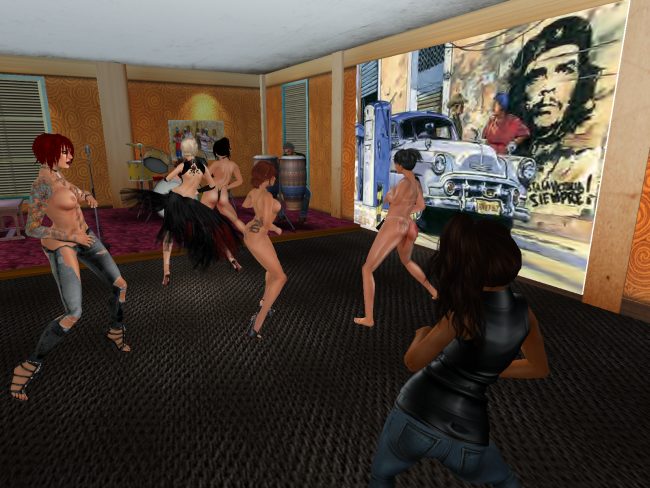 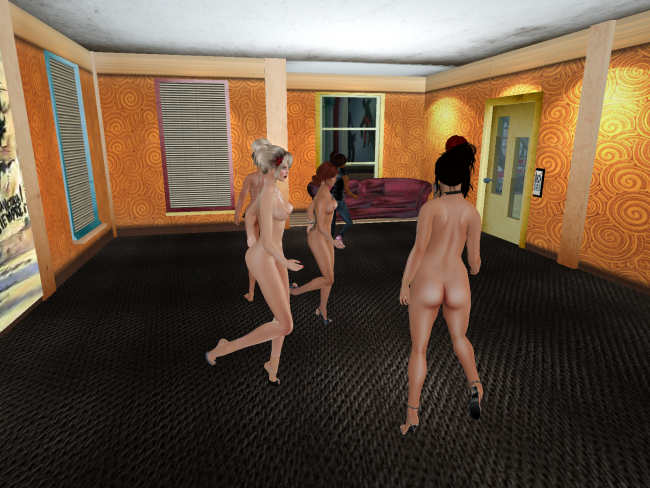 Finally we got some men joining, they are never here when you need them those ones. We warmly welcomed Mario (Mario is actually the man with whom I had an interesting adventure) and Nageur. Kod and I had a plan initially that we were not able to put in place due to the unisex nature of the party … but the arrival of males finally allowed it. 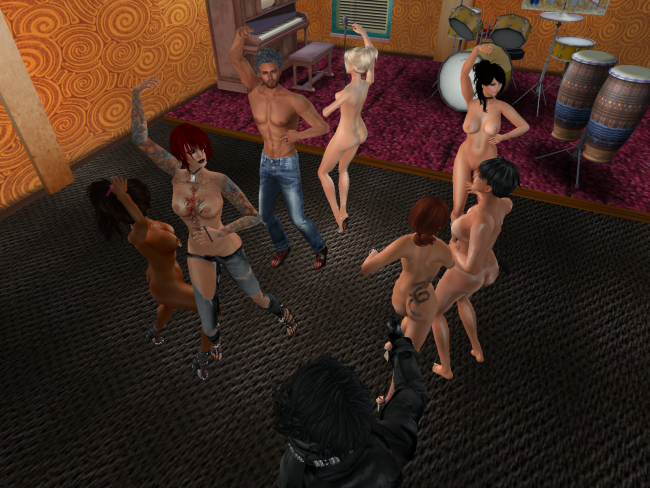 Kod brought a little stool and set it up in the middle of the dance floor.

-“And now … Cathy will perform a lap dance for one of the male of the assistance” he announced at the mic.
-“Kod! Kod! Kod!” the crowd chanted
-“No, no, no, not always the same ones” he said with a wide smile

As none of the two shy ones wanted to give it a go, I decided to pick the “happy” one myself. I danced and moved towards Mario. I took his hands and had a short dance before leading him to the stool on which I made him to sit. He seemed a bit tensed, worried but was smiling, so I guess he was happy with his fate. 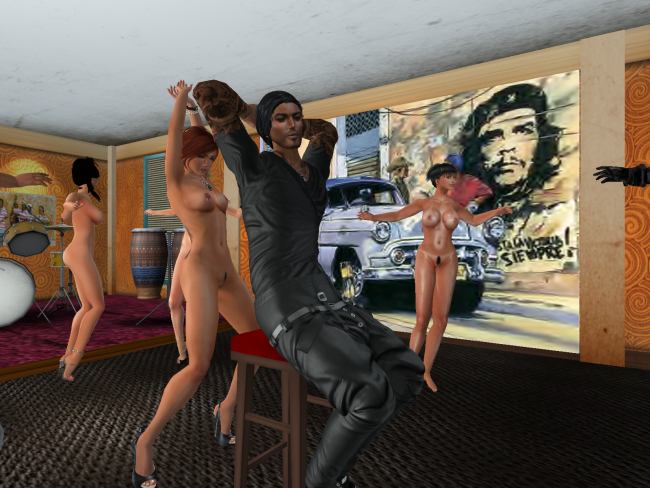 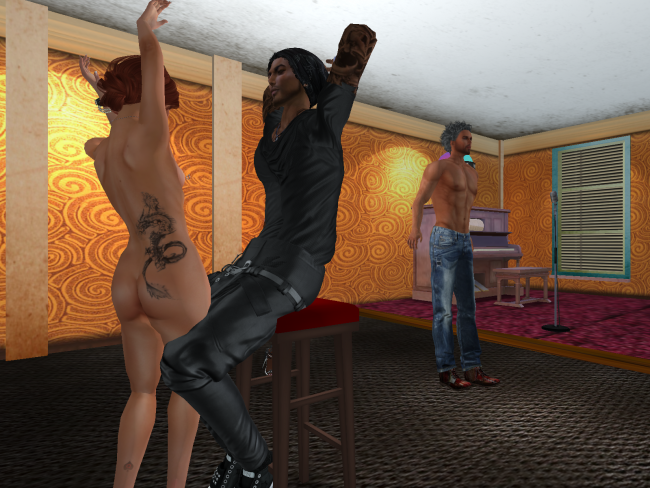 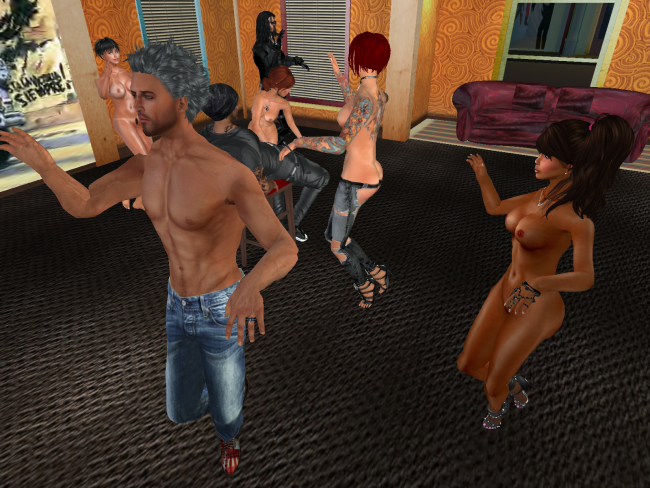 I was so wild that I gave him probably the hottest “private” dance I ever did in my life. Pressing myself against him, brushing my bits on him, it was definitely very very hot. I almost came in the process, and I had to end it before it actually happened. 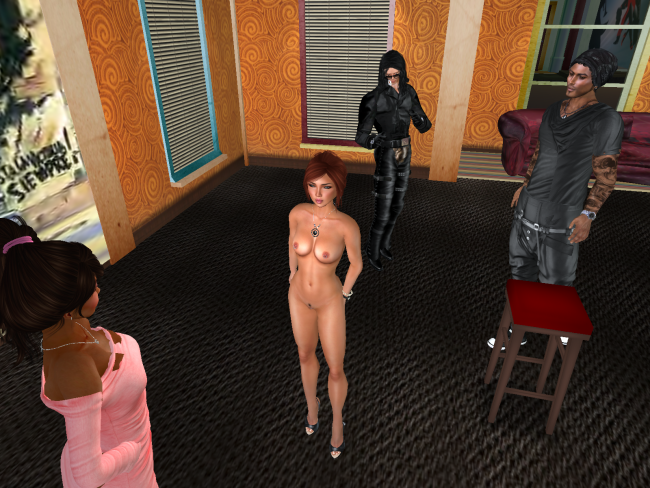 It was becoming late and the guys left one by one. We remained once again only myself and Kod and Sarah. We discussed late after the party and Kod had to left eventually.

I enjoyed this late talk, I made another good friend in the person of Sarah. Maybe you will hear of that very good friend another time soon, we agreed on something, but this story if for another day.

3 responses to “NIP Dare #9: The striptease of the cuban singer”