It was a few days after I interviewed Kod, my first interview ever. He actually called me, saying he was hosting a completely improvised party outside of the Buena Vista Social Club.

When I arrived, people were actually outside, dancing in the streets, the general atmosphere was funny and playful. Kod welcomed me with his usual demeanour and invited me to dance. He is such a fine salsa dancer now, but he admitted he took some private lessons with Sarah. Sarah and Valsmith were there as well, dancing next to us. Well I have definitely a lot to learn in salsa, I was by far the worst dancer around.

I invited a few of my friends to join, there were Thierry, Alma and Mark. We were now quite a crowd, dancing like crazy, laughing and chatting … well to make it short, we were making a lot of noise and I guessed, the neighbours probably had hard times to sleep then. We did not care at all, at least I.

Things started to become crazy when one of lady there, I think she is called Jenny but I am not sure … I had already drink a bit too much at that time … well that Jenny decided it was too hot and launched a topless party. And seconds later, she was there, dancing with Thierry, displaying her assets to him and to the crowd … and it started to spread among the female dancers.

I cheered the man into complying with this new fashion … I did not had to demand for long, they were more than happy to do so. And soon I was dancing with a torso-bared Kod … Thierry followed and I had more hard times convincing Valsmith but he finally did it: I was not disappointed at what I saw … such a sexy torso. The man is a boxer, and the sport definitely makes some very sexy torsos to look at.

Some of the girls resisted the solicitations to go topless as well, mainly Alma, myself and Sarah … actually Sarah gave it a short go, she is not that shy this one actually. 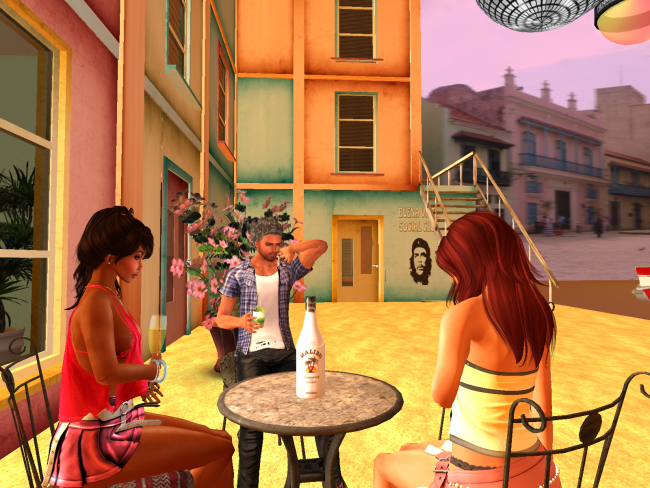 I had a lot of fun. The time passed quickly and the people left one by one. At the end, it was only Sarah, Kod and myself. We took a little break around a table, enjoying the warm temperature of Cuba’s nights. I finally decided to go to bed and I swiftly fell asleep … exhausted by such a nice and fun dancing party. For a change, I was wearing more clothes than the others.

3 responses to “A sexy cuban party”