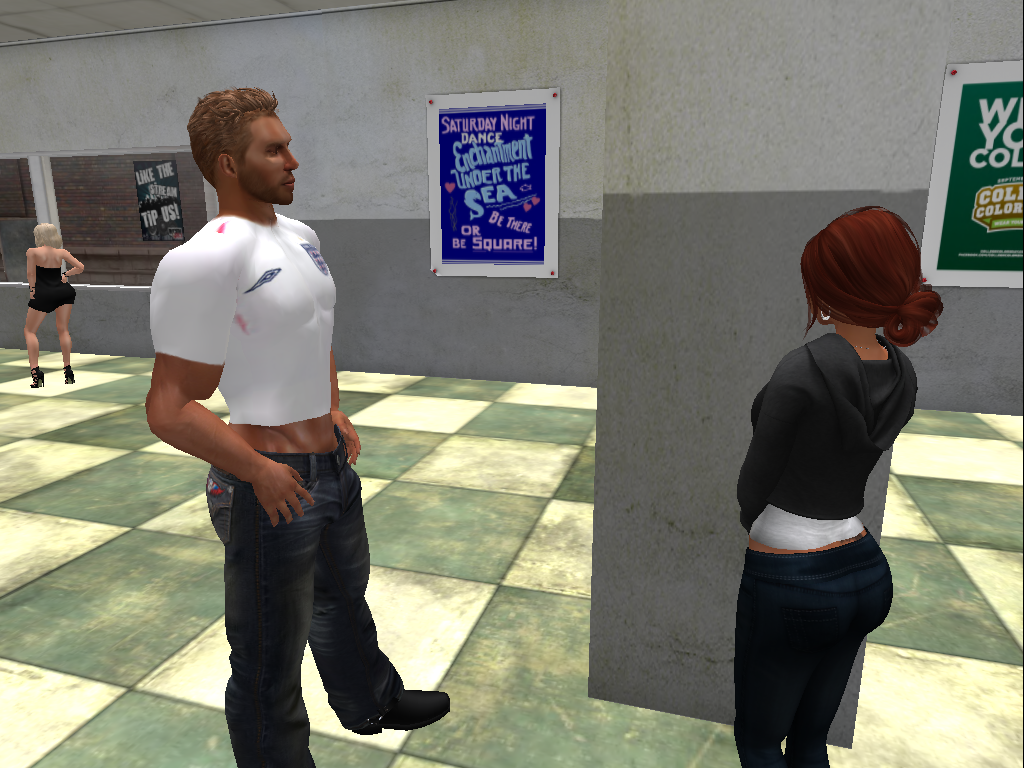 I decided this time to go back to the college. Yes you know this place with teachers and fellow-students. So I put on an adapted outfit and selected a place to check what is actually happening in an adult college in SecondLife. It can be rather unexpected as you will see.

I entered in the hall, it was quite desert when I arrived, but on Saturdays what could you expect … nobody goes to school obviously. Well I was about to make a tour of the building when I heard an argument outside … apparently a student was complaining about her poor marks to a teacher. I was curious so I approached the exit door and listened to the conversation.

-“I am always given low marks ! That’s completely unfair and demotivating.” she complained.

They were both in the middle of the college-yard, apparently not caring much about the fact that anybody could catch every words of that they were saying. The student was this kind of blonde bitch I was never able to bear … proud of herself, looking pretty and looking for nothing else than fame in the college…. working to get good marks is a pure non-sense for them, they just deserve good marks, that’s all.  I did not know her and still I considered her as the enemy. Immediately I build my character for the role-play: I was the shy and bossy student who spent night at learning and exercising … and this lazy blondie was now trying to get her marks changed. This is actually unfair, don’t you think?

I looked more in details at her, how she dressed … a fashionable elegant black dress, heels … who would wear that in the day, it is an outfit to go out or … to seduce. I now knew what she was after and the strategy she put in place to reach her goal. I watched the teacher wondering if he will fall in such a basic trap, surely he will not I thought. He wore an elegant suit and a tie, I listened more carefully at what he was saying and I learnt that he was actually the headteacher. What he was telling her was quite re-assuring, he defended the values of the hard work and told her she should work to expect better marks and so on and so on. “Good !” I thought to myself, he sounds like a reasonable and smart teacher.

-“All right, come to my office, we will resume this discussion there” he finally said in an exasperated tone.

Oops, time for me to move as they came my way. I was able to retreat quickly within the hall, un-noticed I suppose, as they passed by me without a stare at me. I bumped into a fellow-student with whom I had a distracted talk while I kept an eye on the headmaster and the blondie. Happily my fellow student friend was in a hurry and left … the hall was clear and I tip-toed up to the closed door of the office in which both of them vanished. I pressed my hear against the door.

The conversation was muffled and it was quite hard to grab what they were actually saying. I was able to catch a few words. At one point I was able to hear something like that:
-“Maybe I …… about your marks ……. Come this side of the desk ….. What do you think?” I heard him say

I heard her clasps her hands but I did not get her answer. It was very frustrating  not being able to understand so … I decided to be bolder and I very slowly turned the knob of the door and pushed it slightly open, just a crack. And there the words came to me clearly now. I grabbed my phone from my back pocket and started the voice recorder … if there is a fraud, I will get it on record and put those two in jails.

-“You see Abigail, it will just take me to click this button to validate these new marks and validate your semester … barely, but at least it will be validated.” he said. I was stunned, there was the fraud on record … those two will get in great trouble if it is proven that some exam marks were fixed. “But you know Abigail, there is nothing for me in doing this … unless …”
-“Unless Sir?” asked Abigail in her exasperating flirty tone.
-“Unless you …. you are nice to me, you see what I mean ? Why don’t you sit on my lap Abigail?” I heard him say. This was actually becoming more and more interesting, are they about to engage in this kind of activity right in his office … that would not be cautious I thought. I had definitely to get the ultimate evidence with a picture … I switched my phone to camera mode and silently slid it through the crack of the door. I was now able to see them on the screen of my phone, she was actually sitting on his lap … I took two pictures and I smiled widely. Those two are doomed.

It seemed the headmaster became more and more into her. “Remove that dress will you ?” he said and soon after the little black dress was on the floor, letting Abigail stark naked … definitely a naughty one I thought. I continued to take pictures of this amazing interview.

-“I will increase your mark in ‘general behaviour’ ” he said his hand between her legs. “No undies is a really good behaviour Abigail. From now on, you will come to my office every morning to let me check you are following this new rule for you.”

Abigail seemed to enjoy her fate and was moaning under his caresses.
-“Now let’s see how you mark in sport and biology” he said pushing her on his desk and zipping open his pants.

I had just the time to take a picture when a large hand covered my mouth and nose and I am dragged from the door without any opportunity to resist. I was so captivated by what was happening in the headmaster office that I did not hear my aggressor arriving behind me.

He whispered in my ear:
-“We have a little nosy mice here who needs a good punishment for spying the headmaster private business, haven’t we?”

I shook my head and tried to get rid of his catch but he was definitely very strong. I learnt later he was the coach of the basketball team … he was actually a giant. I tried to argue with him but all I was able to achieve is mumbling,

-“Now nosy mice, I am going to remove my hand … you do not make any noise or I will let know the headmaster what you just did. Did I make myself clear?” I slowly nodded and he released his grip. “Good, what is your name little mice?”
-“Catherine” I replied in a croaked voice.
-“You have been very naughty Catherine, you know that ?” he asked stealing my phone I was still holding tight in my hand. He browsed the content and looked at me again “Very naughty mice”. He finally threw the phone to the floor and crushed it under his foot. “Sorry Catherine, I just cannot let any evidences go through.”

I looked in despair at my destroyed phone … all the evidences are gone now.
-“Now you will follow me Catherine, no fuss, no noise or I will make sure you are fired of the college and nobody wants that, want you Catherine?” I shook my head. “Ok this way” he told me pointing to the stairs descending into the basement.

When I arrived downstairs, I saw a room at the end of the corridor with a sign on the door “Detention Room”. I was heading to it when he called me back.

-“No, no Catherine … not the detention room. I did not say I will keep you in for some work, I told you I will punish you … and there is a different room for that.” He grabbed some keys from his pocket and opened a door who led to the boiler room. He made me enter and closed the door behind us. Then we walked through two other doors, each time he closed the door.
-“Where are we going?” I finally asked becoming more and more worried.
-“We are there Catherine” he said while we entered the last room … a very large and round room.

He pushed me to the middle of this strange space which looked very medieval in a way. I realized I was standing on top of a very large cage embedded into the floor. We were probably in a very ancient part of the building. From the ceiling were descending chains which were ended by leather cuffs.

-“Give me your wrists” he ordered. As I complied with the order, he attached my wrists into the cuffs and tightens them. Then he worked a winch which made the chains to pull my arms to the ceiling. He stopped when my elbows reached the height of my forefront.
-“What … what are you going to do?” I asked shaking with fear.
-“I will have some fun with you” he replied very calmly. “If you behave well and I am satisfied with you, I will release you. If not, well I will put you in this cage below … until I am satisfied. Is that clear Catherine ?”

I gulped and nodded “Very clear” I answered in a croaked voice. And this is basically what happened:

Finally satisfied he threw my clothes to my face.
-“Get dressed now Catherine. I will see you tomorrow morning 7:30AM sharp for the basketball training. You are now a member of the cheerleaders squad.”
-“S … sorry?” I asked him.
-“You heard me! As long as you do not talk of this, your little spying story won’t go to the headteacher. Having you in the team will allow me to keep an eye on you … with benefits.” he added smirking.

He finally let me dress and led the way outdoor. He abandoned me in the corridor waving.
-“See you tomorrow Catherine, otherwise …” and he vanished.

This is how this chapter finishes. I longly hesitated before publishing this strange story that I improvised totally during a roleplay with other fellow-players. If you can read it today it is because I finally decided I wanted to show it to you. I am not sure I will write a sequel or not, it will really depend on if you liked it or not. So please let me know.

3 thoughts on “The little nosy mice – Curiosity kills the cat”