I will try to make you more familiar with a game I have discovered some time ago: BARE. This is an in-world card game during which you will fight against your opponent and attempt to knock him or her unconscious and tear his or her clothes in the process … so better not be too shy if you plan to give it a try.

So the first thing you have to do is to get the HUD that will allow you to play. It is usually available in the arenas where you can play the game, and the good thing about this is that it is free. You will find a list of the most known arena on jasx website: bare.jasx.org or you can go in world here: secondlife://Ryder%20Beach/176/161/2501

Then, you will have to do throughout the configuration of what they call the armor. It is not as complex as it looks like, the goal is simply to define the outfit you will wear during the battles and what will be removed (or kept) when a part of the armor is destroyed. There are actually five parts in an armor: head, hands, feet, torso and groin. For each of these parts, you have to define what are the clothes and attachments you want to wear when the armor part is worn, and what you wear when the armor part will be removed by your opponent. For instance you can decide that you wear a shirt as the torso, and when it is removed, you want your little titties to be attached in replacement of the shirt (just a suggestion).

Once you have done that, you have to learn the rules, but once again it is very simple. Each player will attack at his turn and will be given five cards to do so. As you have certainly guessed, the cards represent the pieces of the armor you will hit: head, hands, feet, torso and groin. On each of the card there is also a little circle in one corner representing the card you are allowed to play after this one. For instance a card representing a foot with a head in its corner means you can sequence your attack with a hit on feet then a hit in the head. Off course it means that you have a head card in your hand.

The goal is off course to build the longest sequence of cards from your hand to make as much damage as possible to your opponent. Each card played does more damage than the previous one: the first card played will inflict 4 points of damage to the armor part you hit, the second one will inflict 5, the third will do 6, then 7, and finally 8 for the 5th card played in sequence. So in total you can inflict 30 points of damage to various parts of the armor … or to only one part of the armor if all the cards played represent the same part. Each armor part can sustain 30 points of damage, when the limit is reached, the armor part is destroyed and you are stripped of it. You will win an extra turn to play each time you destroy an armor part of your opponent, so it is one of the key of the game as playing more turns than your opponent gives you a real advantage.

When one of your body part is bare (no armour to protect it), each hit on this area will start to do damage on your body. And as for the armour, depending on the rank of the hit in the sequence of cards the damage will be different. The first card will do 10 points of damage, then the second 11, then 12, then 13, and finally 14. Your body has 100 points at the beginning, each hit will make this reserve to decrease and when you will reach 0, you have lost.

Something I still need to explain is the mana. This is a magic reserve you can use to trigger abilities (to make more damage, heal your body, shield etc…). When you use some abilities (before you play your cards) it will tap into your mana reserve. You can reload it by playing a mana card (or many if you can sequence them).

Well enough explanation now, I will put myself at risk to demonstrate the way it works.

I sent a message on the group “Bare Humans” and got an appointment for a match in a deserted area with Josh. A very nice fellow as you can see. 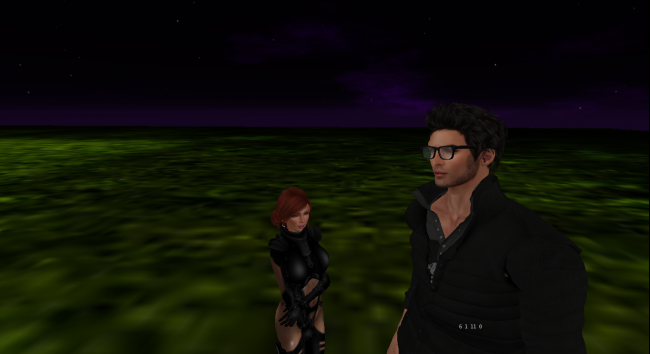 Very soon we started to fight and I did not spare him, it’s the best strategy in this game. 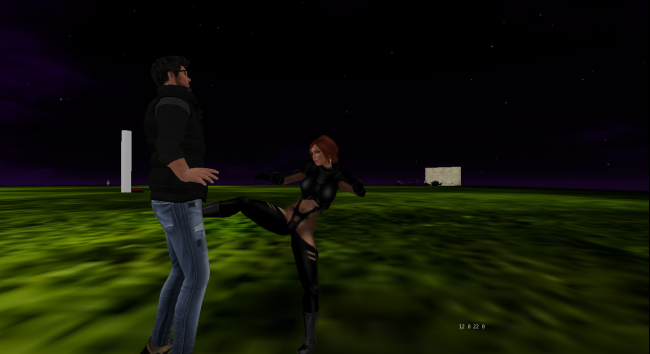 Here is how the little HUD looks like when you are in the middle of a battle: 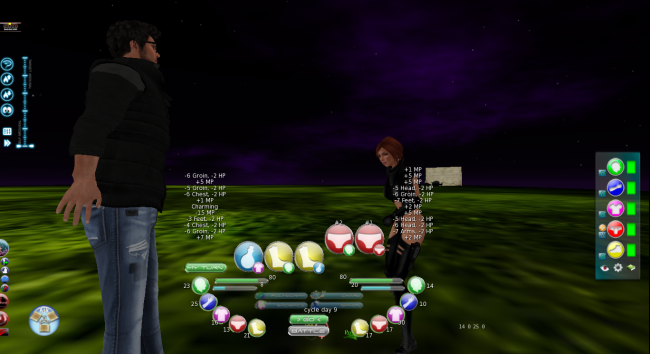 And with the rounds passing we started to loose some of our armour pieces, me in particular. 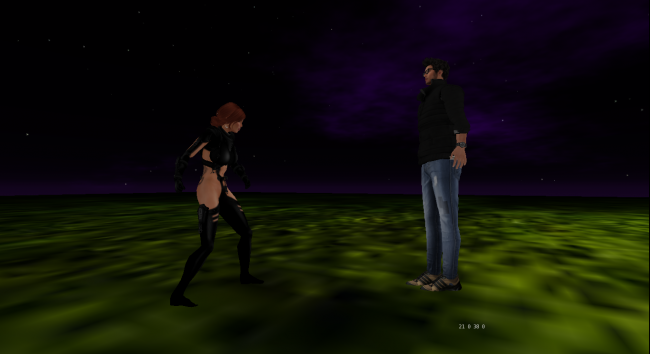 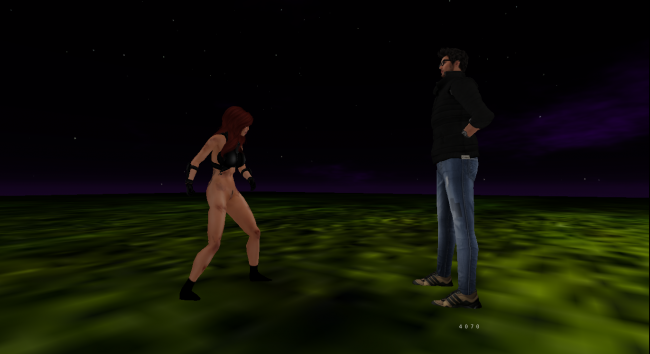 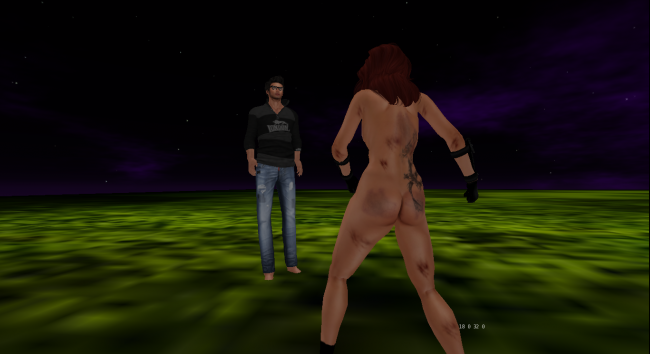 The fight was really though and I was starting to think I am going to loose. 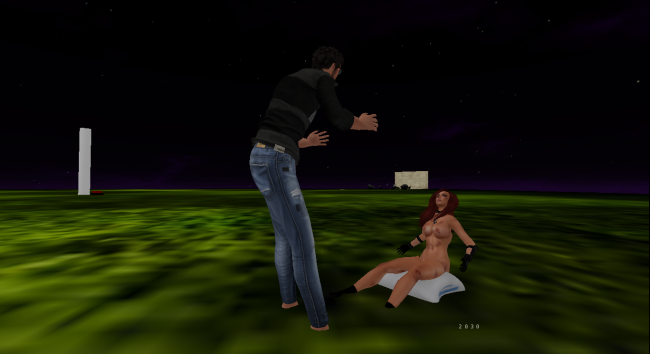 But when I got his pants, it seems I became more lucky than he: 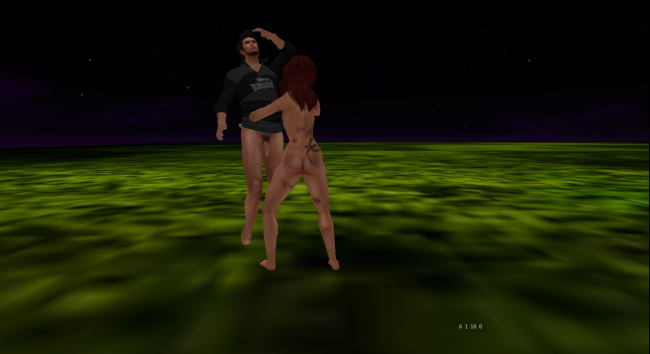 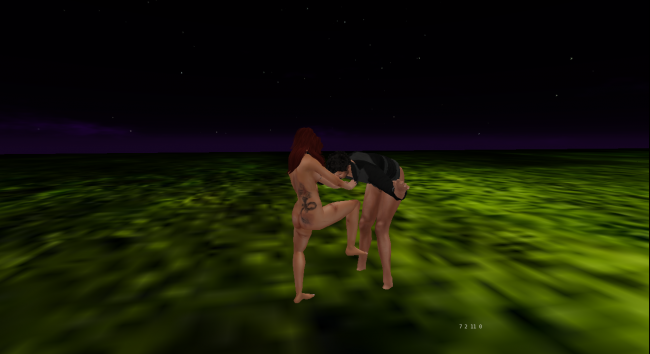 And I finally defeated him …. I was quite proud of myself … Ho and I forgot to mention, the winner can punish the loser at the end of the game … which I did. I only regret I was not able to rip his shirt !! 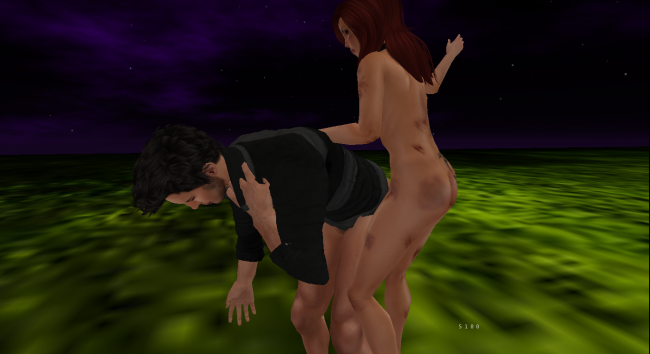 I hope you found this interesting. If you need help to setup or on the rules, send an IM in-world or let a comment here, I will be very happy to help you !

I hope I will face some of you very soon in an upcoming battle.

One response to “BARE game”