A visit at BBF – Chapter 1: A tour of the estate

I have heard from quite a long time of BBF ranch (BBF stands for Bridled By Force). It is one of the most famous pony place of SecondLife, well … for human ponies to make it crystal clear. It has a speciality compared to the other similar places in the sense that the ponies do not come here willingly: they are forced into this very particular form of slavery.

My visit started on the little moor where I had a glimpse at the marvelous scenery that are surrounding the island of BBF. I was there since a few minutes when a cart arrived driven by a very welcoming girl in a “Leia as a slave” outfit (Leia is a famous character in Star Wars). 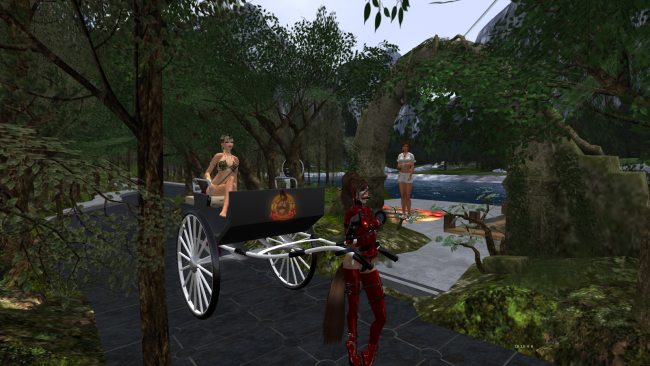 Everything would be normal if the cart were not pulled by one of these famous ponygirls. The outfit that the pulling girl wore was quite revealing and she really looked like a pony, even her boots were mimicking horse legs. It is very surprising to look at, and I was confirmed later that the bits she wore prevented her to speak.

The girl on the cart invited me for a free ride around the island and introduced herself as Honey. It took me time to understand what she was saying as she used the third person to talk of herself. It is apparently what slaves are supposed to do. The island is owned by a mysterious Mr Renneville she told me and she is a “favourite slave” to him, enjoying privileges not granted to other slaves such as being able to wander free in the estate. 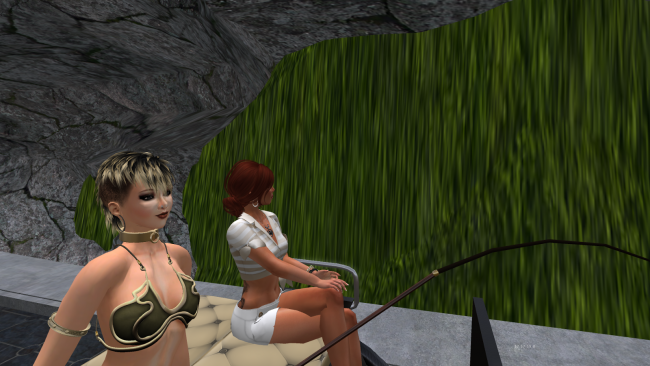 We went through a long tunnel under the rock pulled steadily by the ponygirl in front of us. I guessed that the cart must have been significantly heavy as I saw the muscled of the ponygirl flexing under the nearly bare skin of her buttocks. I felt sorry for the girl and in a sense it was quite exciting. At the end of the tunnel, we arrived at a barn, it looked like a very normal one, carts of different sizes were parked outside, along the bank of the lake.

We passed the barn and stopped a bit after. There Honey explained that the ponies, the ones who deserve it, are branded. She pointed the place where it happens and I felt my blood turning cold when I saw the iron. Honey herself was branded twice and she proposed to show me after the tour. She seemed more proud than sorry about what happened to her. 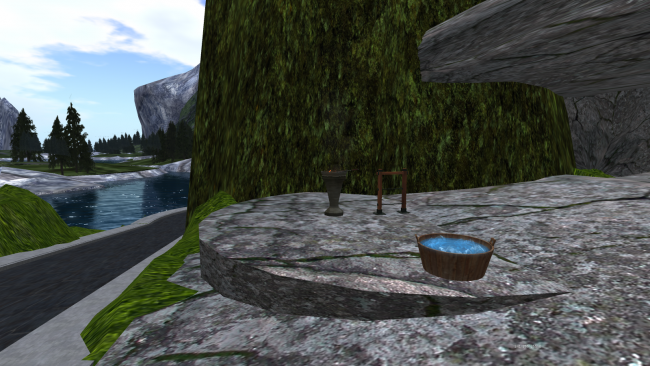 Honey cracked the whip once again and the cart slowly moves under the pull of Darla (the name of the ponygirl, I learnt that from Honey). The scenery was fantastic and we finally reached what we could call the training fields: a show jumping field, a ring, a slalom, etc. All you can imagine you will find in a stud, you will find it at BBF … exception being the trainees are not horses.

Feeling sorry for Darla, I finally asked Honey if we could end the tour on foot. Honey, as a perfect hostess, proposed to take a short cut through the woods. We followed a narrow path under the shadow of large trees, crossed a very romantic bridge where Honey told me the inhabitants of the island are used to have a refreshing bath in the river.

We then arrived in front of a very modern villa, the work of some genius architect, in the middle of the forest. I was very impressed by the style of the house, but in the same time, I felt anxious, I could not explain exactly why, but this place was making me nervous, even threatening. Honey told me this was the house of Darius Renneville himself and that if I am granted to meet him, as I asked her earlier, I would be most probably invited in the luxurous villa … This sounded very exciting, and this Mr Renneville sounds like an important person in the mouth of Honey.

During all the rest of the tour, Darla was following us, silently and discreetly. I corner-eyed her from time to time to gauge her reactions. How can it be like to be considered like a simple pony ? I would have liked to ask her some questions, but I felt that Honey might not appreciate this. Moreover the bits that Darla was wearing were completely preventing her to communicate with her mouth …. instead she was stomping with a sort of code that Honey seemed to understand. I took a mental note to try to interview Darla privately later.

When quitting Mr Renneville’s property we arrived in a small clearing. On its edge, an impressive oak stood since probably centuries given its huge trunk. When I was approaching it, Honey warned me not to get too near, as it was haunted by fairies. I laughed at her comments, but I realized when looking at her that she was very serious about it. I could not believe a grown girl like her, even a slave, could still believe in fairies and all these stories for children. Honey was actually avoiding cautiously a large perimeter around the tree. I did the mistake not to listen to Honey and it happened to me … In seconds I was caught. My ankles attached and I was hanging in the height by my feet.

I saw it a strange light circling around me … those strange voices talking about me very threatening. I was in total panic and asked Honey to help me …. she was too frightened herself to do anything, and Darla was not any better. The only thing Honey advised was that I kept still … the fairies will eventually grow bored and will leave me. I did exactly that, trying not to panic …. but seconds later my clothes were gone, I was stark naked ! I was shocked and amazed, but it was only the beginning …. again a few seconds later I felt my body was moistening … I was covered in something … it was oil … I was fully oiled by these devil spirits !

This is when the worst part started: a floating paddle approached me … I could not believe my eyes. It turned around me and positioned itself on my behind. The fairies decided I needed a punishment and the paddle entered into motion and spanked me again and again, very violently. I nearly felt unconscious when they finally vanished.

Unfortunately they came back for me and the spanking resumed, my bottom was painful, each stroke was a real torture. I cried, I supplied, nothing would stop them … even Honey and Darla were speechless keeping themselves at a safe distance.

The spirits finally vanished and I did not know how I managed it but I succeeded at setting me free from the ropes that were restraining my ankles. I fell hardly on the floor and jumped on my feet to run as fast as I can behind Honey.

Honey took my hand and we ran from this devilish place to the barn. Darla followed us with her usual discretion. I entered in the barn behind Honey. It was empty but I was able to see the stalls … many of them which are most probably meant at keeping the ponies captive: I felt like entering into a prison, a special kind of prison, but definitely a prison. Honey led me upstairs where a large living room is set up … to which purpose I don’t know, but I imagined this is where the masters of these ponies are gathering before enjoying their pets. In a corner of this large room stood a dressing screen, behind it a bed which I understood was the one of Honey. She proposed me to lay down while she get a cream to apply on my ruined bottom. She came back eventually and applied the ointment carefully on my burning skin …. Soon later I felt asleep.

One response to “A visit at BBF – Chapter 1: A tour of the estate”